Over the years, people have tried many different methods of preventing ants from crossing a certain threshold. Let’s have a look at some of these methods and see if the myth that ants will not cross copper is true.

Ants will avoid crossing copper in most instances. They are not allergic to copper, however, so can theoretically cross copper should they need to.

Ants are said to avoid copper. They do not like the metal and will not cross over it if it lies in their path. Therefore, there are some straightforward ways to prevent ants from spreading around your garden.

Putting a line of copper coins around their nest will prevent them from expanding their territory, and it will deter them from crossing over into your garden.

You can also use the same method by putting copper coins outside your door to prevent ants from entering your house.

Are Ants Allergic to Copper?

There is no evidence to show that ants are allergic to copper, so whilst they will avoid it and often not cross it, it is theoretically possible for them to cross it if in dire need.

Their reasons for doing so might consist of having to vacate their nest due to an emergency.

Copper fungicide is a solution used to fight fungal diseases on plants. It has also been proven to kill insects such as ants and aphids. You can use a copper fungicide to deter ants.

If you apply it to the soil of certain areas in your garden, then the ants will avoid it. However, it is a little risky to rely on copper fungicide to get rid of ants.

To ensure that this method remains effective, you will have to reapply the copper fungicide solution after every time it rains. However, applying the solution this frequently is more than you would apply for treating fungal infections.

The high concentration of this solution can damage your plants if applied in large quantities.

Therefore, it is not recommended as a method to treat ants. But instead, the fact that it acts as an ant repellent should be seen as a bonus on top of it treating fungal infections on plants.

What Other Substances Will Ants Not Cross?

So ants won’t cross copper but are there other substances they will avoid? There have been many myths circulating about what substances ants will and will not cross.

Here is a short list of things ants are not said to cross and whether or not they are true:

It is said that ants will not cross a line of chalk. However, this does not seem to be a permanent solution. The smell of the chalk will temporarily confuse the ants and disrupt their scent trails, but it will not prevent them from actually crossing the line.

It’s a common question: Will ants cross a salt line? Ants appear to like sweet things, so a line of salt is not appealing to them. Whilst it does not seem to be as effective as using copper, some people have sited success by using simple table salt.

It will also disrupt their scent trails as they will not be able to leave proper ones whilst hindered in their movement.

Baking soda is toxic to ants, and they know this, so they will avoid it. They will not consume the substance either, but if you need to kill an ant infestation, then mixing baking soda with sugar will trick them into consuming the toxic substance.

To summarise what we have learnt, here are some key points. Ants do not like copper and will avoid crossing a line of copper. Put copper coins around their nest to deter them from spreading.

Using copper fungicide is effective but can risk damaging your plants due to the high volume you would require. There are other lines of substances that ants will not cross which include petroleum jelly and baking soda.

Ryan is a keen gardener from the UK who's spent years dealing with countless, common pests over the years so knows the ins and outs of how to deal with pests in the garden

Read More
Ants are known for being opportunistic hunters that will eat almost any source of food that they can…
Read More
AAnts
Read More
Although there are chemicals available to kill ants, they can be incredibly strong causing damage to more than…
Read More
AAnts 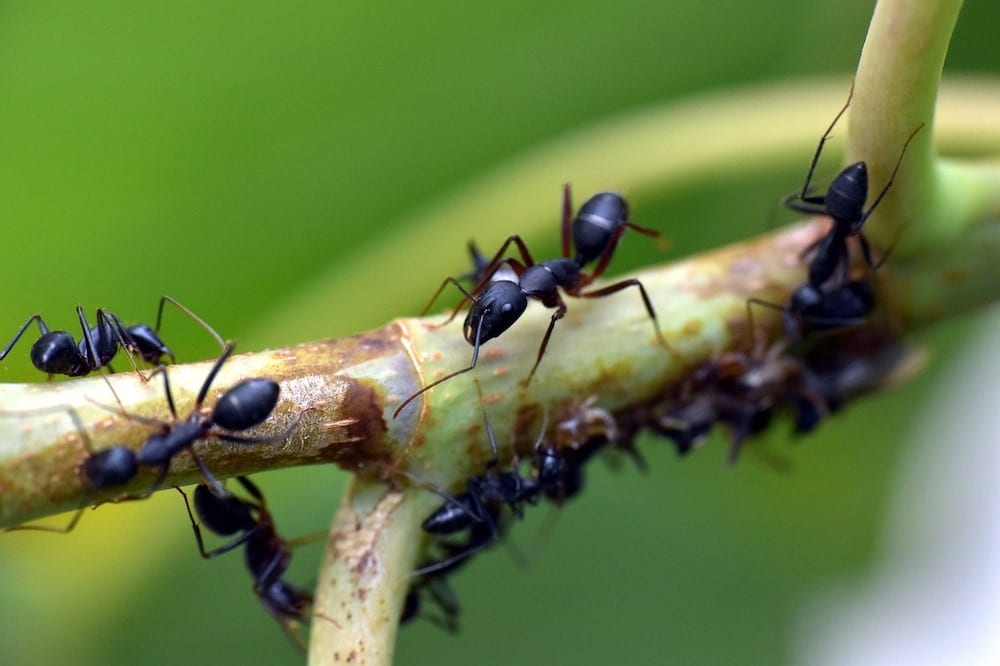 Read More
Of all the garden pests you could find in your garden, the tiny ant is among the worst.…
Read More
AAnts
Read More
While using chemicals is an option to kill ants, it is not something you will want to do,…
Read More