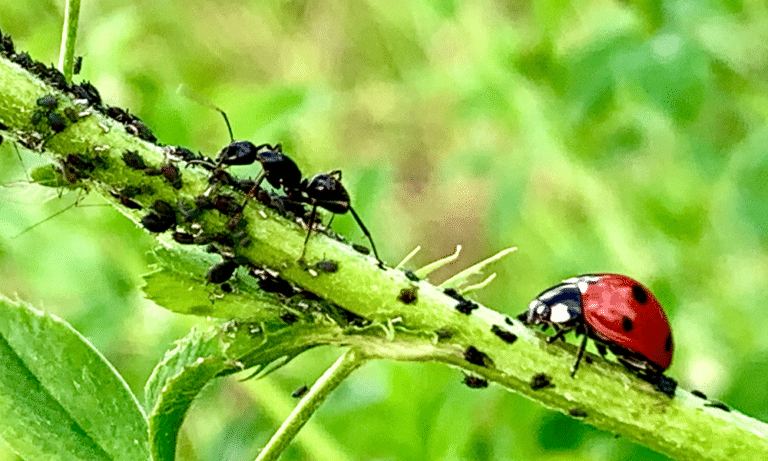 Ants and ladybugs are two common insects found in gardens. While ladybugs maintain a safe distance from ants and do not eat them, some ants will not do the same. But do ants kill ladybugs or not?

It comes as a surprise to people when they find out that ants kill ladybugs. Ants usually prey on insects that smell sweet rather than insects like ladybugs.

However, ants kill ladybugs because there is often a power struggle between the two. Don’t worry, we’ll explain what this means in further detail below:

Ants do not actively prey on ladybugs but will only attack them when they cross their path as they eat aphids. As aforementioned, there is always a power struggle between ants and ladybugs because the ladybug preys on aphids who have a symbiotic relationship with ants.

If ants get into the hard shell of the ladybug, their strong mandibles bite into the skin and cause it harm. While the upper part of the ladybug remains protected because of the outer shell, ants can also attack from the underside, which is soft.

To escape from the ant attack, the ladybug will spread its wings and fly away. However, the wings then reveal the soft part and make it easy for the ants to attack.

In addition, when some ants bite, they release formic acid in the ladybug, which is toxic and kills it.

Do Ladybugs and Ants Get Along?

Ants and ladybugs get along and have been surviving in the same habitat all these years. Both insects are not sworn enemies of each other.

However, ants will attack and eat a ladybug if their source of food (aphids, mainly) is under threat.

When do Ants Kill Ladybugs?

Ants and ladybirds will usually keep at a safe distance. However, there are special circumstances when ants would attack a ladybug that has been preying on aphids.

Aphids are little insects that attack trees and leaves. Ants and ladybugs both enjoy consuming aphids because they leave behind sweet nectar.

Ants can store this nectar and therefore capture herds of aphids. The ants then nurture the herd of aphids, even resorting to nipping their wings off so they cannot fly.

Then, the ants encourage the aphids to produce sweet nectar by licking or tickling them – often referred to as milking them.

A ladybug consumes a lot of aphids and can destroy them. Therefore, ants do not take kindly when a ladybug shows up and attacks aphids. Ants have to protect the aphids and, therefore, will attack the ladybug.

Another reason why ants will attack a ladybug is when it lands in their nest. When anything comes near the ant’s nest, they will feel threatened.

In a nest, it will take no time for the ants to come together and fight with the ladybug.

In addition, ants can sense when another insect is injured or physically weak. Therefore, if ants come across a weak or injured ladybug, they will not stop attacking it. Ants are good at attacking injured insects and are always looking for an opportunity for an easy kill.

Ants will not target ladybugs to eat except only in special circumstances as they are opportunistic hunters. However, ants are mostly scavengers and prefer eating insects or things that have died.

When ants see a dead ladybug, they will not hesitate to bring it back to the nest to feed on it.

Do All Ants Kill Ladybugs?

Different kinds of ants will feed on honeydew from aphids. These ants store the honeydew and then feed it to the worker ants until the abdomen distends. When the ants need honeydew, they will summon the worker and stimulate the abdomen to release sweet food.

Ants have learned this behaviour on an individual level.  Different types of ants store honeydew in this way, and here are some of them:

Carpenter ants are commonly found in North America and store honeydew from aphids.

The honey pot ant also stores honeydew and is found in a brownish-yellow colour. They tend to be found in arid, dry and hot conditions such as desserts.

Don’t worry, this ant is unlikely to be found in the UK… Yet! Argentine ants are an invasive species and are spreading globally, however.

It comes as a surprise when people find that ants can kill ladybugs. However, ants are not active hunters of ladybugs and will not go out of their way to kill one.

It is only when a ladybug attacks aphids are when ants attack it. This is because aphids and ants have a symbiotic relationship. Ants like the sweet nectar that aphids excrete nurturing packs of aphids and protecting them from ladybugs.

Ants can attack ladybugs from the underside, which is soft. Moreover, honey ants also release a toxin that kills ladybugs.

When ants see a dead ladybug, they will take it back to the nest to feed on it.