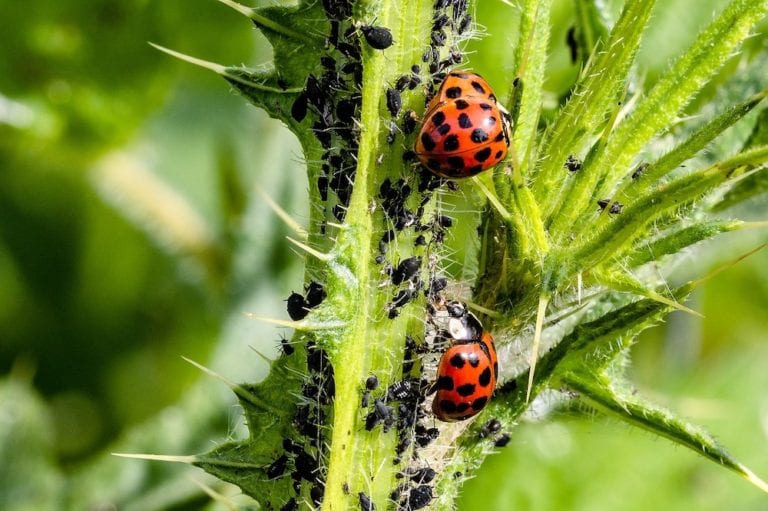 Asian beetles are also known as ladybirds, or ladybugs, that can be commonly found across the world. They have a wide-ranged diet and will often eat a lot of garden pests. Aphids themselves are garden pests, but do they find themselves on the Asian Beetle’s menu?

Asian beetles do eat aphids. Asian beetles will consume a huge variety of garden pests without causing any damage to your plants or garden. The good news is that their main diet consists of aphids so if you have an aphid problem then Asian beetles are your friend.

What Do Asian Beetles Eat?

The diet of an Asian beetle may vary depending on what resources are available to it. But what seems to be consistent is that the main component of its diet is aphids. Let’s have a look at this diet in more detail.

The main question is whether or not Asian beetles eat aphids. Well, aphids are an Asian beetle’s primary food source. They will eat aphids from both trees and ground pastures. One of their favourite species of aphid is the Soybean aphid, therefore Asian beetles provide agricultural benefits for those who grow soybeans.

This small insect is another common prey item for the Asian beetle. Much like aphids, spider mites are tiny pests that can damage plants by consuming their sap.

You may be seeing a pattern here as mealybugs are also sap eating pests. These types of tiny insects seem to be a favourite prey of the Asian Beetle.

All in all, Asian beetles are opportunistic hunters and will eat almost anything that they can find. They have been known to get very aggressive when it comes to food, but these three insect species appear to be the most popular prey choice.

Can You use Asian Beetles to Get Rid of Aphids?

One common method used by gardeners to get rid of aphids is biological control. This means that they would introduce some common and natural aphid predators in their garden to reduce and control the aphid population.

You can use Asian Beetles to get rid of aphids in your garden, some suppliers of biological controls can provide them for you. However, there are ups and downs to using this method.

Whilst the Asian Beetles will consume the aphids and help save your plants, there are some disadvantages to having them in your garden.

They can also leave an odour and stains on some of your plants. It will most likely be the ones infested with aphids as that is where they will feed.

But Asian beetles aren’t all bad. They will not damage your plants, though they may leave them a little stained and smelly. As well as this, their consumption of aphids and other sap-sucking pests will help your garden to bloom once more and they will help to maintain a healthy ecosystem.

What Other Insects Eat Aphids?

These insects look very similar to aphids, but they are slightly bigger and can fly and hop. They use their curved jaws which they acquire in their larvae stage to easily grab and consume the aphids.

In their larval stage, hoverflies look like maggots. They live in similar areas of the garden to aphids and so will prey on them until they move on to their next life stage.

Many species of birds are believed to eat aphids, one of these species is the Blue Tit. There is also evidence showing that there are fewer aphids in gardens that are frequently visited or occupied by birds.

There are more aphid predators than just these three, and you can procure these from suppliers of biological control to deal with the pest problem in your garden.

If your biological control is not working, it isn’t because the aphids are killing the Asian beetles, but it is because they have a protector. Ants.

Ants feed on the sweet substance called honeydew which is produced by aphids. If they protect the aphids, then they get more honeydew. This means that ants and Asian beetles may fight over the aphids.

If the ants win then your aphid population may be protected and continue to grow. In this situation, you may need to look at ways to drive the ants off or other ways to remove aphids.

Asian beetles are still very low on the food chain, meaning they have a large number of predators. Below are some of their predators which you are most likely to see in your garden.

Whilst Asian beetles consume spider mites, larger spider species themselves will prey on the small insect.

Most small songbird species will consume insects, including the Asian beetle. These bird species include robins and blue tits, which are actually also known to eat aphids.

In conclusion, Asian beetles will consume almost any insect they can, but their main diet consists of aphids.

Asian beetles, or ladybirds, can be used in biological control to lower the numbers of aphids in your garden.

However, using Asian beetles as biological control means they may leave odours and stains on your plants and they have also been known to bite humans if they feel either disturbed or threatened. But their presence is very beneficial to your garden, mostly because of their large consumption of aphids.