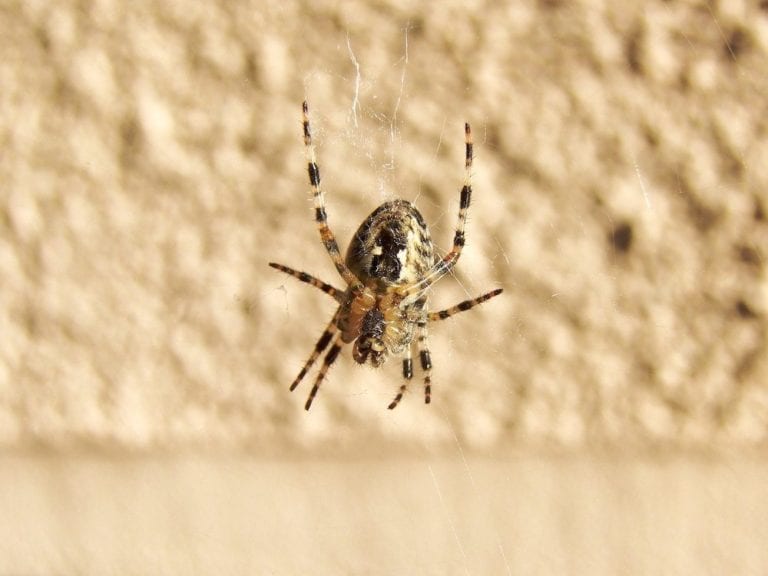 Spiders are known for ridding you of pesky flies by catching them in webs and eating them. But what about the even peskier garden pests known as aphids, will spiders help to get rid of them?

Spiders do eat aphids. The good news is that spiders are not particularly fussy. Aphids are easily caught in a spider’s web so the spider will then eat the caught aphids. In fact, they make up a large proportion of a spider’s diet.

Spiders are great at trapping insects in webs, particularly ones that fly, such as aphids. And they are more than happy to eat the little pests and they actually make up a decent chunk of the arachnid’s diet.

Whilst it is rare for spiders to crawl about plants to hunt for aphids, the aphids are very easily trapped by large webs that surround the gardens and plants that they inhabit.

What Else Do Spiders Eat?

Aphids are so tiny, and some spiders can get really big, surely aphids aren’t their only source of food? You would be right in thinking that. Spiders are actually opportunistic hunters, and this means they will eat almost any insect they can get. Some of their preferred prey items are listed below:

Another benefit of spiders is that they consume ants. This may not seem like much at first, but ants actually protect aphids. With spiders eating ants, other predators of aphids like ladybugs are free to eat to their heart’s content.

Cockroaches are often the prey of bigger spider species including ones that are not native to the UK. As you can imagine, it will require a large and strong web to catch a cockroach and it’ll take a large spider to build such a web.

These are not garden pests and will actually consume certain species of pests themselves. But they have been known to bite humans when disturbed so the spiders might save you a nip or two.

Of course, this does not encompass a spider’s full diet by any means. In fact, in more tropical regions of the world, some species of spiders are even known to eat frogs and bats. But the basic fact remains that if it gets caught by a spider’s web, a spider will almost definitely eat it.

Are Spiders a Biological Control?

Spiders have often been the subject of research into the use of biological control. Biological control is a process wherein natural things, such as predators, are introduced to control the pest population. Spiders are very effective for this.

As mentioned, they have a hugely varied diet and also consume quite a lot in just a singular day.

However, unlike other aphid predators, you cannot procure these spiders from many UK biological control suppliers. But if you see a spider, moving it to a plant that is inhabited by aphids is a good idea as they will happily get to work on reducing aphid numbers.

What Other Animals Eat Aphids?

Spiders are not the only predator of aphids by any means. In fact, they will even eat some aphid predators themselves. But let’s have a look at what other creatures in your garden may also help with controlling your aphids.

Ladybugs or ladybirds are probably the primary predators of aphids. Aphids are the main part of their diet and the reason for their introduction to different countries around the world was so that they could help control the overriding aphid population in certain areas. You can get ladybugs from biological control suppliers.

Both fully grown and larval lacewings will consume aphids. But they do appear to eat more aphids in their larval stages because they are able to grip the tiny pests with their curved jaws.

There are many birds that will pick off insects in flight, or even off the ground. In the UK, it is likely that you might see a bird such as a blue tit hunting for aphids in your garden.

There are many other insects and creatures that will also eat aphids as part of their diet. But these species are the ones you are most likely to see assisting you in your garden.

A common worry is that pest predators will end up becoming garden pests themselves.

If you have arachnophobia, then spiders will be a pest to you. However, when it comes to maintaining your garden, spiders are hardly ever considered pests. In fact, they are very beneficial to not just your garden, but to the whole environment.

They are not a threat to health, and they have not been known to bite people. As well as garden pests, spiders will also consume house pests such as mosquitoes and earwigs. Meaning that they are helping to keep both your indoor and outdoor areas safe and pest-free environments.

In conclusion, we have learnt that spiders will consume almost any insect they can, including aphids.

They are beneficial to the environment and will also consume house pests without becoming pests themselves. They eat ants meaning that the aphids do not have their protection.

You cannot purchase spiders from biological control suppliers but you can purchase other aphid predators such as ladybugs to control the population.