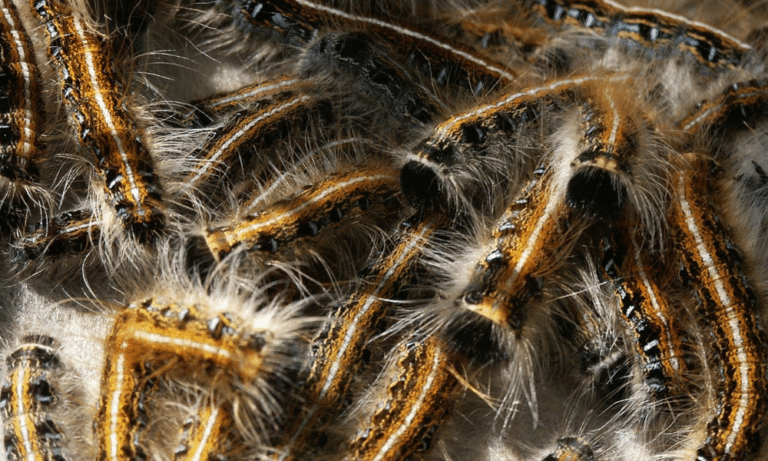 There isn’t any way to determine the sex of a caterpillar as the sexual organs are absent in them. A caterpillar’s reproductive organs only start to develop when it pupates.

So, you simply have to wait until the caterpillar becomes a butterfly to see if it’s a male or female. Some species of caterpillars, however, have subtle physical characteristics to identify their sex, for example, a pair of yellow organs on the side of each dorsal heart line.

How Do You Identify the Sex of Caterpillars?

It is almost impossible to identify the sex of a caterpillar because they’re the immature form of moths and butterflies. Being at this juvenile stage, they don’t reproduce, mate or lay eggs, so they don’t have reproductive organs as they don’t need them.

While almost all of them are either male or female, the development of reproductive organs only occurs when they pupate.

However, a few subtle physical characteristics of a caterpillar can help you determine whether the caterpillar is a female or male.

These gonads are a yellow pair of organs on both sides of the dark dorsal heart line.

A little less subtle physical feature through which you can identify the sex of the caterpillar is that certain species of caterpillars have varying sizes among their two genders.

Similarly, like among many other animals, the size of the female caterpillar is visibly much larger than the male. Even if the age between the two is the same, the sizes may greatly vary, and this way, you can detect if a caterpillar is a male or female by comparing the two.

The orange palm dart butterfly lays eggs on certain species of palm trees. Caterpillars spend their whole lives there until they pupate.

Both male and female caterpillars of this species have a dark line on their backs. The males have undeveloped testes called gonads, as mentioned earlier. These gonads are yellow circular organs, and they’re located under the caterpillar’s skin on both sides of the dark line.

It’s situated close to the tail end of the body and the middle. The visibility of the gonads depends on the age of the caterpillar. The gonads get more visible when the caterpillar ages.

Monarch butterfly caterpillars, both male and female look exactly the same. Still, if you wait around to see until they pupate, you’ll be easily able to differentiate between the two sexes. A cremaster is a tiny black hook that the caterpillar can use to hang itself on something stable to become a pupa.

There is a black pattern that goes from the cremaster to the body of the pupae. The rear of the pattern is in dots. On the pupa’s side, beneath the dotted pattern, away from the cremaster, there is a vertical line that is only found in female monarch butterfly caterpillars.

This line is not seen in male monarch butterflies. Both the male and female have a vertical line near the cremaster so when identifying the sex of the caterpillar, look at where the dotted pattern ends.

Are Butterflies Male or Female?

In some butterflies and moths, there is an obvious difference between the antennae of the sexes.

Some moths, for example, have a feathery look to their antennae which is absent in females. This feathery look of the antennae in males helps to smell the pheromones that are emitted by the female.

For example, the males of the species Hesperiidae have a long stretched-out mark on each of their forewings near the middle.

In a lot of animals, the female is seen to be much bigger than the males, specifically among egg-laying animals.

Similarly, in butterflies and moths, the abdomen and the wingspan would be bigger as compared to a male, making the female look overall bigger in size than the male.

Dimorphism means having two distinct forms of patterns within the same species. Several species of butterflies are dimorphic, so the males have a different pattern and color than the females.

In butterflies, when a species is dimorphic, the males usually have the more vibrant colours.

Like a lot of animals, both the sexes look so similar that it gets very difficult to identify whether they’re a male or a female.

Similarly, in caterpillars, it’s difficult to determine their sexes until they pupate and turn into a butterfly, as only then do they have a sex. Otherwise, caterpillars are premature and don’t have sexes.

Determining a butterfly’s sex is a little easier as butterflies and moths have several distinctive characteristics and features that differ between the two sexes. Some species, however, may be completely similar, and upon dissection, you will only figure out its sex.