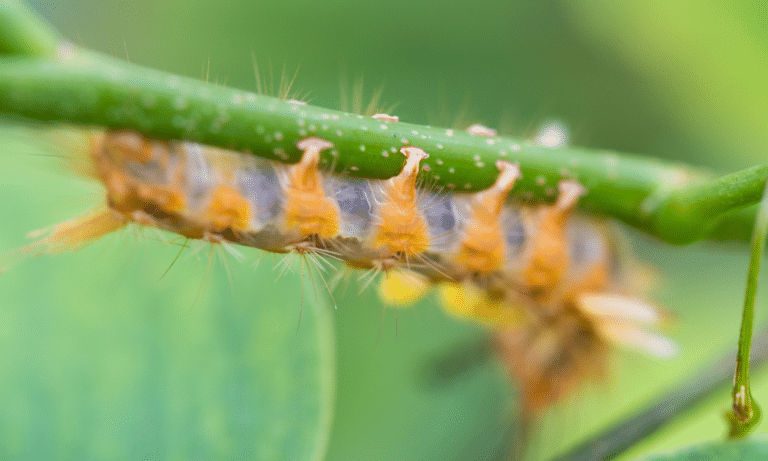 Yes, caterpillars have legs, and just like any other insect, they have six of them. They also have false legs called prolegs.

A caterpillar may seem to confuse you for a relative of a centipede because it appears to have more than six legs, but in reality, only six of a caterpillar’s legs are its true legs.

The rest of the legs aren’t really legs at all.

The false extra legs are called prolegs. These protrusions come from the caterpillar’s abdomen to help it balance on surfaces and increase its grip on various surfaces. They help the caterpillar to move too.

Unlike true legs, prolegs don’t have three joints and are simply stumps coming out of the caterpillar’s body.

How Many Legs Does a Caterpillar Have?

The total number of legs a caterpillar has varies on the caterpillar species and its stage in life. Often, several butterflies and moths have the same quantity of legs as their caterpillars. However, this varies too, as, in certain species of leaf-mining moths, no legs are seen at all.

Several caterpillars of larger moths and butterflies generally have three true legs on both sides of their bodies, giving them six in total, the optimum number of legs found in every insect.

So the answer to how many legs a caterpillar has would be 16 in total. Whenever you see a caterpillar next time in your yard, be sure not to mistake it for an odd-looking tiny centipede because it’s an insect.

Science is a little more complicated than mere common sense. For example, you see an animal moving with a part of its body, and you’d say that is a leg. For insects, legs aren’t that straightforward.

Entomologists have divided legs into two different categories when it comes to insects. Insects have six legs with three on each side. Now, caterpillars are also considered insects as they have three pairs of legs on both sides.

True legs are also only located on the thorax, which is the middle section of the insect body between the head and abdomen. The prolegs don’t have segments. They’re like stumps and are fleshy appendages used to clasp and grip various surfaces. Prolegs are also useful for mobility and balance.

You can identify a caterpillar if it’s going to become a moth or butterfly according to its number of legs and where the legs are located.

What are True Legs?

Spotting a leg is pretty straightforward. Everyone knows what a leg is, and they can easily distinguish an animal’s legs from the rest of its body.

However, for caterpillars, pointing out their legs is not as straightforward as you might think, as caterpillars are seen to have several pairs of legs, but only a few of these legs are their true legs.

How are True Legs and Prolegs Used?

The design and look of true legs, and prolegs are very different from each other, and because of this, you can get a clear idea that both types of legs are used very differently.

The true legs have claws or hooks on the tips and are segmented, making them much more useful legs. With true legs, a caterpillar can easily hold and grasp onto whatever food it wants to eat.

These true legs are more agile, so when the caterpillar needs to escape a predator or reach food that is far from them, these can come in handy a lot.

Prolegs aren’t this complicated as the true legs and are mainly used to grip onto various surfaces to secure the caterpillar. Prolegs have small hooks as well, called crochets. They help the caterpillar anchor onto a surface when it’s climbing.

Like all other insects, caterpillars also have only three pairs of segmented legs which are called true legs, while the rest are only for support, balance, and gripping onto surfaces, these legs are called prolegs, and they’re fleshy stumps.

Prolegs can vary depending on the caterpillar species, but in total, caterpillars often have 16 legs.