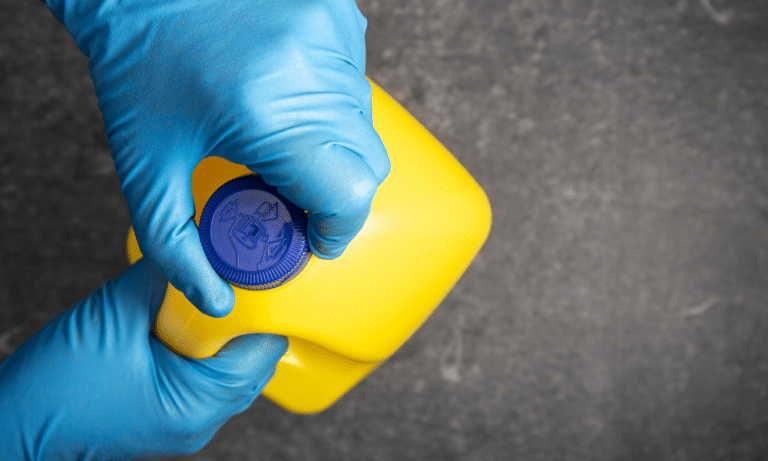 While cats do little damage to the plants, they poop and pee in the soil, which is harmful. Cat poop is known to have dangerous parasites harmful to human health. So, does ammonia deter cats?

Yes, ammonia can be used to deter cats. But you need to consider whether you should and whether it can be toxic to cats.

It can come as a surprise that ammonia deters cats. The scent of ammonia repels some cats. Since a cat’s urine can smell like ammonia, it is an illusion that the territory belongs to another cat.

However, cats may spray urine and mark their territory in some cases. While ammonia may keep some cats away, it can also be dangerous in high doses. Therefore, you need to be careful when using it.

Does Ammonia Keep Cats Away?

Yes, ammonia will keep cats away as poison or traps would. But this doesn’t mean you should use ammonia. Ammonia can cause harm to cats, other wildlife and the environment.

Is Ammonia Toxic to Cats?

A cat’s urine contains a large amount of urea compared to other animals. Therefore, when cats pee in an area, the area combines with the bacteria to produce an ammonia smell.

You have probably noticed that cat urine has a strong, pungent smell?

Many people find that using ammonia to repel cats makes sense. However, ammonia in large doses is dangerous for cats and can kill them.

The cat will suffer from numerable damage to the skin, stomach, and eyes if it isn’t dead. Moreover, what makes it more dangerous is cats do not need to ingest ammonia to suffer from damage.

The strong ammonia fumes are inhaled by cats and are enough to cause damage to their health. Exposure to ammonia fumes can lead to respiratory problems in cats.

Avoid It!
As much as a cat can be annoying, causing long-term harm or death to a cat is not worth it. Consider using safer, more natural methods instead.

Is Ammonia Safe to Use in the Garden?

There is no point in using a method to deter pests that may negatively impact the plants. While ammonia is harmful to cats, it can also damage plants.

Many people believe that nitrogen found in ammonia makes it beneficial for plants. However, using ammonia in the garden has more drawbacks than benefits.

Ammonia can be found in soil, air and water and provides nitrogen to plants. Nitrogen is essential for the healthy growth of plants and improves seed production leading to better yield. Despite the benefits that ammonia offers, it can be toxic and kill or damage the seedlings.

If you use ammonia in your garden to deter cats, you will likely damage the plants. Using ammonia is risky because you do not know the pH level of the soil or water. You can tell that your plants have been damaged by ammonia if they display burnt leaves, black roots or die.

In addition, if you use ammonia in the soil, cats are likely to sniff it. This means that cats are inhaling the toxic fumes in the ammonia. If the ammonia is concentrated, it can be the beginning of health problems in cats.

Moreover, ammonia is also dangerous for humans. It is one of the reasons why many household products warn to use them in a ventilated area. Ammonia can cause eye and lung irritation, lightheadedness and headaches. In some cases, it can even lead to pneumonia.

Is Ammonia Bad for the Environment?

Ammonia is bad for the environment, much like many other toxic chemicals. Ammonia can ruin the soil, kill plants and harm wildlife.

Should You Use Ammonia to Deter Cats?

Due to the disadvantages of using ammonia, many people have reservations about whether they should use it in the first place.

Many people think that ammonia would be ideal since gardens are well-ventilated areas. However, there are certain drawbacks to using it.

If you use ammonia in your garden, cats will get a whiff of it as they are curious creatures that feel the need to investigate. Some cats will stay away as they think it is another cat’s territory.

However, cats can spray near the ammonia to mark their own territory in some cases. This makes it pointless to use ammonia in the first place.

It is best to resort to other methods of repelling cats. Many natural ways to deter cats do not involve harming them or your garden. The important thing is to play with scents since cats have a sensitive sense of smell.

For instance, cats hate the smell of citrus fruits, so you can use citrus rinds in your garden to repel them.

You can also create a spray using water and citrus juice to spray around your garden. This will not harm any cats or the plants in your garden.

Also, it would be helpful to create a border with plants cats hate, such as rosemary, lavender, garlic, and thyme.

One of the methods that people use to deter cats from their garden is ammonia. A cat’s urine contains large amounts of urea which interacts with the bacteria in the surroundings to give off an ammonia smell.

If you use ammonia in your garden, cats will get a whiff of it and avoid the area, thinking it is another cat’s territory.

However, there are dangers to using ammonia in gardens as too much of it can cause health problems in cats and humans.

Moreover, ammonia can also be harmful to plants and can burn and kill them. In most cases, ammonia is ineffective as cats pee in the area, marking their territory. It is best to resort to other methods of repelling cats instead of ammonia.