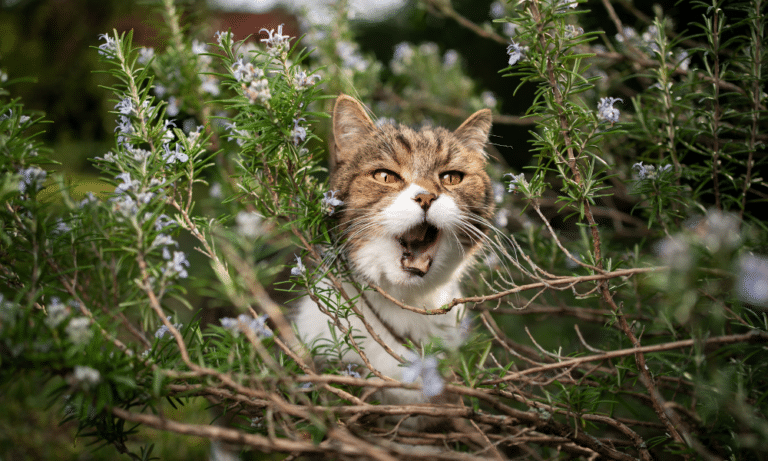 Imagine strolling in your garden only to be greeted by the pungent smell of cat poop rather than fresh air. We’ve all been there!

Unfortunately, while cats may appear adorable to their owners, they have a habit of spoiling gardens and messing with our hard work. One known technique for repelling cats is to plant herbs they dislike. So does rosemary repel cats effectively or not?

Yes, rosemary is one of the herbs which repels cats.

Rosemary is fairly easy to grow. It needs well-drained soil but can cope with a bit of shade, a lot of sun or a mix of both. It will grow fairly slowly compared to other herbs so really think about where to plant it.

If pruned properly, rosemary can also be used to create low hedges or borders in your garden. You’ll need a few plants but simply plant them in the ground in a row.

You can also buy prostrate rosemary which trails. This works great in raised beds and pots as it hangs over the edge and prevents cats from climbing in.

Do Cats Hate the Smell of Rosemary?

There is a reason why rosemary is used to repel cats, and it is because cats hate its scent and the texture of the leaves.

Cats have sensitive noses, and anything strong puts them off. You will find that cats do not like strong scents like citrus, vinegar, pepper, and of course rosemary.

Cats have a more acute sense of smell. An average pet cat will have a sense of smell that is around 12-14 times as strong as humans. If you find a smell particularly punchy, imagine how it must feel being a cat – you can use this knowledge to your advantage when deterring them.

You’ll also find that cats do not like to brush up against coarse or spikey leaves which is what rosemary plants have. Instead, they’ll avoid going near the plant and look for a clearer path.

Why Do Cats Hate Rosemary?

As you’re certainly aware, cats do not really care where they do their business, and unfortunately, your garden may become their top choice for doing so. After all, it’s probably why you’re trying to get rid of cats from your garden.

Fortunately, a way to avoid this problem is to grow some herbs in your garden, such as rosemary. But why do cats hate rosemary so much?

Cats themselves are sensitive to scents which contributes to them hating rosemary (and other strong-smelling herbs such as lavender and some mints).

Apart from the scent, these felines have a dislike for the rosemary plant too. The rosemary plant has a coarse texture that cats do not like brushing against. If you have a rosemary plant in your garden, cats will likely avoid it because of the rough and spiky factor.

Is Rosemary Toxic to Cats?

While no one likes the sight of cats in their garden, spoiling the plants and soil, we do not wish to harm them – regardless of how frustrating they can be.

Before you use any repellents against cats, it is important to look into the toxicity of those methods. Some herbs can be toxic to cats, and using them can cause them to suffer.

If we consider rosemary, the good news is that the herb is non-toxic for cats. Therefore, using rosemary in your garden to repel cats is great because not only do cats not like it, but it also does not harm them.

How to Use Rosemary to Deter Cats

Now that you are aware of rosemary and its ability to repel cats, you should also know how to use it. The important thing to remember before you use any method is that it may not always work.

Sprinkle Rosemary
For this method, you just need to take some dried rosemary and sprinkle it around your garden where you find a cat often going to the toilet. You’ll need to ensure you reapply the dried rosemary as the weather can reduce its impact rapidly.

Plant Rosemary
This is a fairly obvious option but you can simply plant rosemary in your garden. If you like to use it in your cooking then this is a win-win!

Create a Rosemary Spray
Another method that most gardeners like to adopt is making a spray. You can infuse the rosemary scent by boiling it in some water. Also, with making a spray, you can include other ingredients such as cayenne pepper or cinnamon, which deters cats. By using your rosemary spray, you also do not need to worry about making a mess.

Using rosemary is an organic approach to deterring cats. By doing so, you will not be harming cats, your garden will be safe too as will any beneficial visitors that may visit your garden. This is why we advise against using chemicals such as Jeyes Fluid.

Should You Use Rosemary to Deter Cats?

Yes! Rosemary is cheap, effective, provides you with a tasty herb and even looks good especially when it goes to flower.

If it doesn’t work, then you won’t have lost an awful lot and will have still gained a great culinary herb in the garden.

It can be annoying to find cats in your garden, ruining your beds and pooping in the soil. One way to repel cats is to use herbs like rosemary. As cats have a strong sense of smell, they do not like the scent of rosemary.

You can either sprinkle the herb in your garden, plant it or boil it and make a spray along with other ingredients like pepper. A great thing about using rosemary is that it is non-toxic to cats.

There is no reason to worry if you do not have access to rosemary. However, there are other herbs that cats do not like, including thyme and lavender.