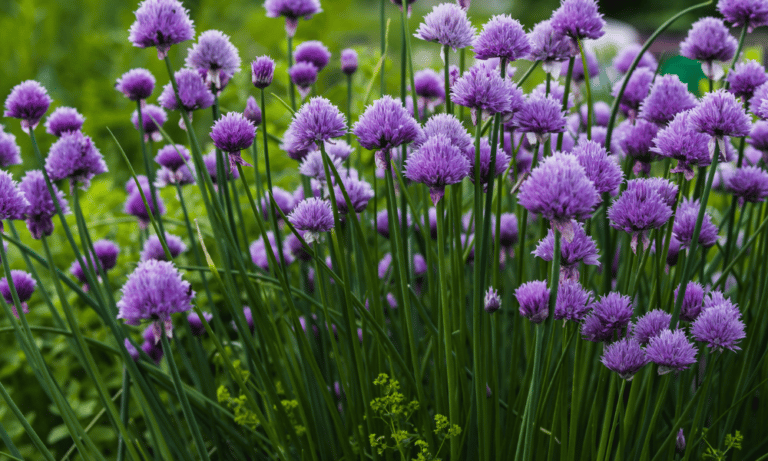 Slugs are one of the most common pests in a garden that people usually complain about. They’re voracious eaters and eat anything they come across. Or do they? Do slugs eat chives, for example?

No, slugs don’t eat chives; instead, they avoid them because chives have a very strong smell that is unbearable to slugs and most other pests.

Chives are perennial herbs mainly used for culinary purposes as their leaves are a punchy, onion-like ingredient used in cooking, but as these plants are an allium, they have a strong smell that can deter slugs and most other pests.

So, because of their strong smell, these plants are not only used in the kitchen but also as a repellent for slugs and insects.

Chive plants are members of the onion family, which are also alliums. It has hollow tampering and cylindrical leaves that have a soft texture. It produces large purple, pale clustered flowers. Chives can live for long if the conditions are favourable for them.

Slugs will not eat your chives, nor will the other pests in your garden because garden pests, especially slugs, are sensitive to strong smells, and chives have a very potent fragrance that may not be too bothersome to you, but to your garden slugs, it’s unbearable.

All plants from the allium family are known for their pest-deterring abilities, as they all have potent smells capable of shooing away many harmful and annoying pests.

A slug will run in the opposite direction if it smells or sees chives because chives and all other allium plants have a defensive compound called allicin which is where the incredibly potent smell of the chives plant comes from.

Slugs don’t eat garlic just like they avoid eating chives, mainly because garlic is from the allium family and has the same pest-deterrent abilities as its other family members.

Similarly to chives, garlic also has allicin, which gives its plant a very powerful and potent odour.

Many people use garlic for its slug-deterring abilities to secure their gardens from slug infestations. They often crush garlic which releases allicin, and a wave of potent smells starts to spread, which keeps all the destructive pests away.

Garlic is favoured more than other allium plants because when it comes to deterring harmful insects and slugs, garlic has the most pungent smell; hence, it’s the most effective at preventing slugs and other pests.

Other alliums can deter slugs but aren’t as effective as garlic. Many people use garlic for its pest-deterring abilities to keep pests like slugs and aphids away from your garden.

Using garlic or any other allium plant is also a natural way of deterring slugs that don’t involve harmful products so that they won’t hurt any plants or vegetation.

There are several ways you can use garlic as a deterrent for your slugs which are using fresh garlic, making a spray by combining water and garlic, and sprinkling garlic powder in the affected area will get the job done.

Fed Up With Slugs Ruining Your Garden?

We’ve Put Together a Complete and Free Guide on How to GET RID of Slugs Finally! – Including Deterrents and Preventative Measures to Take:

Yes, chives deter slugs as they’re from the allium family that has allicin, a defensive compound, as previously mentioned.

This compound is present in all allium plants and gives them potent smells capable of deterring any annoying insect and harmful slug that can cause severe damage to your plants.

Using chives is a natural and ecologically friendly method of removing a slug infestation. This way, you won’t have to use harmful chemical products and items to deal with your slugs; a natural way is better as it wouldn’t put beneficial insects of your garden and the plants in danger.

Slugs are sensitive and fragile creatures. They don’t have any defensive body parts or traits that protect them from the world’s hazards, so even a strong smell can quickly shoo them away.

They have a very sharp sense of smell, so even though the smell of alliums would be pretty typical to us, to a slug, it’ll be very bothersome and unbearable, so slugs and other garden pests with strong senses of smell will avoid an area where there are alliums planted such as chives.

Can You Use Chives to Protect Plants from Slugs?

Chives can easily be used as a deterrent for slugs and most other garden pests to protect your precious plants from being eaten.

Many garden pests depend on your plants for their sustenance. Still, slugs are by far the worse as they have a voracious diet and are opportunistic omnivorous feeders, so they don’t have a particular favourite plant to eat but would instead feast on whatever plant they find and move on to the next one when they’re done.

This makes these pests very destructive, and the sooner you take care of a slug infestation, the better because slugs very quickly munch down a plant, entirely killing it.

To use chives as a deterrent for slugs and other pests, you can simply plant several chive plants in your garden so the smell of the plants will equally spread out, or you can plant some chives near plants that are severely infested with slugs.

If you have further questions about chives and slugs, then check out these FAQs:

No, slugs will avoid garlic chives as they have one of the strongest scents of all chives varieties. Slugs dislike strong allium scents.

Because slugs dislike the smell of chive plants, there is little chance of them eating chives flowers. They will also avoid the flowers as they, too, have subtle onion-like flavour.