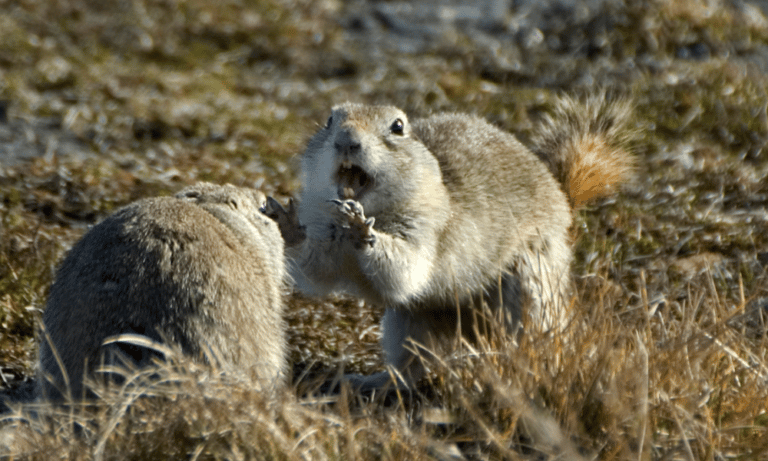 Certain animals may have odd habits regarding diet and sometimes eat their own kind. Squirrels are often referred to as being cute and fluffy but despite this appearance of squirrels, are they cannibals? Do squirrels eat squirrels or not?

Yes, male red squirrels are cannibalistic and may sometimes kill and eat pups of other squirrels.

The main reason is that female squirrels have a second litter, during some years when food is plentiful.

As female squirrels have multiple mates before their first breeding round, a male will kill the first batch of pups to ensure the next batch will only be his.

Animals such as lions usually have this same behaviour, but when it comes to squirrels, due to their cute and fluffy appearance, you wouldn’t even think they would do something like this, but in the wild, looks can be deceiving.

Squirrels are cannibalistic, and red male squirrels have a habit of killing pups of other squirrels in hopes that the female squirrel will only mate with it as the pups it kills are the first batch of pups the female gives birth to.

The males do this because killing the first batch of pups will make the next batch only his. Killing baby animals is not uncommon in the wild; lions are very well known for this behavior. Lions kill all the cubs when it takes over a new pride.

The male squirrels may also stash the pup carcasses so they can eat them later or use them whenever there’s a shortage of available food.

Stockpiling their food is a common habit among squirrels. Squirrels eat a lot and store even more.

The stockpiling also greatly helps squirrels during winters as squirrels do not hibernate like most animals. Squirrels simply pass winters by utilizing the food they stockpiled.

Do Squirrels Hurt Each Other?

Generally, squirrels will not hurt one another and just get on with scavenging for food they can stockpile. They can occasionally get into fights.

Do Squirrels Fight to the Death?

If squirrels do get into a fight then, chances are, they will do so to the death as this is when a fight is deemed a success with an outcome.

Will Squirrels Eat a Dead Squirrel?

Despite their adorable appearance, squirrels share a similar trait with many animals as they can sometimes eat other dead squirrels.

For instance, if you comes across a squirrel that has been road-killed or is shot by someone, other squirrels may come and feed on its dead body.

However, squirrels only consume the dead of their kind when there aren’t any other better options for food or if food is scarce in their area.

An average squirrel mainly feeds on fruits, veggies, berries, nuts, seeds, buds, but as squirrels are omnivores, they can also eat meat.

When a squirrel eats meat, it’s something that is smaller than it, for example, insects, snakes, small amphibians like frogs, caterpillars, and other small rodents.

Squirrels rarely eat their dead, but it is possible when a hungry squirrel has nothing to eat.

As mentioned earlier, female squirrels make litters with several male squirrels. This happens when food is in abundance.

When the male squirrel has killed the pups of another male, it will eat the pups, though he may not always eat them, it’s one of the occasions where squirrels eat squirrels.

Squirrels, obviously stay safer if larger predators are far away. A squirrel that is well-fed and safe is satisfied and happy. Cannibalistic behaviour is uncommon with squirrels and only occurs when there aren’t any other options.

Red squirrels are endangered in several parts of the world, such as Wales, England and Northern Ireland. The reason for their decrease in numbers is mainly caused by the arrival of grey squirrels.

Grey squirrels don’t purposely attack or kill red squirrels, but they carry a disease that is harmless to them but lethal to red squirrels. This disease is called Parapoxvirus.

Grey squirrels eat green acorns and a lot of them, resulting in the decimation of the main food source for the red squirrels. The reds can’t eat them as the greys eat them all before they ripen.

Looks can be deceiving in the wild, as squirrels may appear cute and furry on the outside, but they can be vicious eaters when food is scarce.

Squirrels are omnivores, and they consume veggies, fruits and meat, they consume animals smaller than them, but when there aren’t any other options, a squirrel will eat other squirrels that are already dead.

Squirrels will also kill and consume baby squirrels of other squirrels to get a chance with their female.