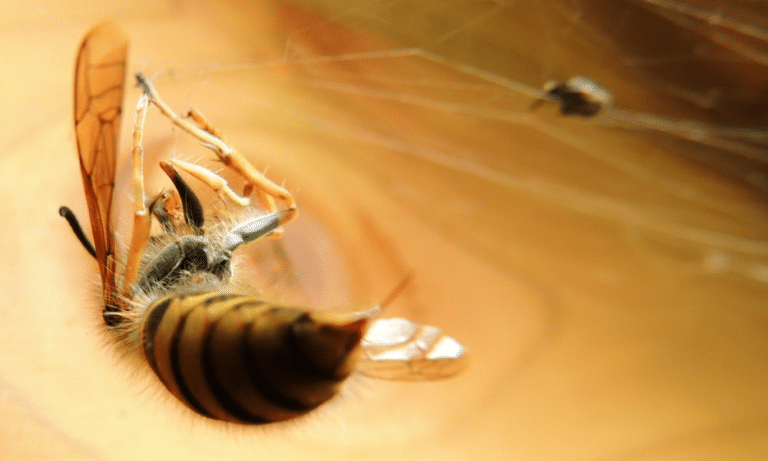 After you have killed a wasp, you may assume that a wasp is now safe to handle. But is this the case? Or can wasps sting when dead?

Yes, wasps can sting you even when they are dead.

It is important to be careful even around a dead wasp because it can still sting you. Many people think it is because the wasp has a natural reflex to sting. However, what actually happens is you can inadvertently sting yourself with their stinger.

If you were to carefully pick the dead wasp up, place it into the palm of your hand and hold it still then it’s not going to be able to sting you. The dead wasp will have no reflex to sting you.

However, if you haphazardly pick it up then you could accidentally jab their stinger into your finger. When a wasp (or bee) dies, it will extend its stinger to fight off the attacker. It will remain in this state when dead. This is why it can become easy to sting yourself.

The good news is that the sting from a dead wasp will not be as strong or as painful as a sting from an active wasp.

There have also been cases where wasps have been mistaken for dormant instead of dead wasps, and people have gotten stung in the process, thinking that they can pick up

Wasps have a stinger which they use for self-defence. The stinger contains venom, which can enter your bloodstream as the wasp stings you. Even without a proper sting, wasps can cause pain.

Most people who do not have sting allergies will only have a few symptoms after getting stung by wasps. It is normal to feel pain or a burning sensation where the wasp has stung you. A wasp sting is often followed by itching, swelling and redness.

The area can swell and have a white or yellow mark. The good news is that the pain should have subsided within a few hours, and the swelling reduced.

However, there are people with severe allergic reactions to wasp stings. While the symptoms are more pronounced, they are not life-threatening. Some of the symptoms include redness and extreme swelling for two to three days.

Someone with allergies can also suffer from vomiting and nausea. It can take a week for these symptoms to end.

Does a Wasp Sting Hurt?

Ultimately, some people have a high pain threshold, while others do not.

The initial sting is always painful. However, the following reactions depend on if the person is allergic to the venom and how one’s body reacts to the sting.

Can a Wasp Sting Kill You?

If you are scared that getting stung by a wasp can kill you, you will be glad to know that a single sting cannot kill you. The pain and the burning sensation may be awful, but a sting will not kill you.

There are, however, people who have developed extreme allergies to wasps. A life-threatening allergic reaction is known as anaphylaxis. This happens when the body goes into shock because of the wasp venom.

People who suffer from anaphylaxis go into shock quickly. Some of the symptoms of anaphylaxis include extreme swelling of the face, hives on the body, difficulty breathing, dizziness, low blood pressure, diarrhoea, and lack of consciousness.

While one string is not enough to kill you, the same cannot be said about many of them. Getting stung by a swarm of wasps can be a life-threatening situation for many people. The oft-cited figure is around 50 stings. Unless you’re provoking a swarm of wasps then this is simply not going to happen!

Been Stung? Then check out this guide from WebMD covering a range of remedies for wasp stings.

You might look at a dead wasp and think it harmless, but this is where you might be wrong. A dead wasp can still hurt you. Although they cannot actively sting you, there is a risk that you sting yourself as you go to pick it up as their stinger will be extended and erect.

Some people are allergic to venom and experience extreme symptoms. You can go to anaphylactic shock after getting stung. If you experience nausea, vomiting, difficulty breathing, you must get professional help.

Getting stung by a wasp once is not likely to kill you, but multiple stings can lead to death.