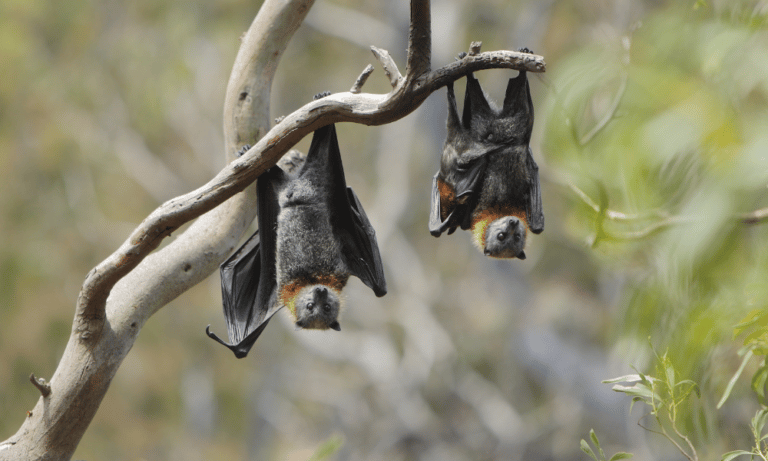 Bats are a bit of a mystery. Do you have any idea what they eat? Do they eat plants or insects? And specifically, do bats eat wasps?

Many bat species are insectivores, and their diet mainly consists of varying types of insects. This could include wasps. However, bats rarely eat wasps because bats are nocturnal, and wasps aren’t.

Bats only drink blood and eat nothing else, right? No, not at all!

The bats that do exclusively feed on blood are called vampire bats. Other species of bats eat varying kinds of insects, nectar, and fruits. Fruit bats are the ones that love eating fruits, and there are many species of bats which are insectivores.

Insectivore bats could feed on wasps, but they rarely do so as they’re nocturnal animals and wasps mainly come out during the day. Wasps don’t exit their nests after sundown as they can’t see correctly in the dark and find food during the day.

However, the wasps that do come out of their nests after sundown, such as nocturnal wasps, will often fall prey to a hungry bat that is searching for food.

Yes, bats don’t distinguish which type of wasp they will eat and which type they won’t; if they see a wasp flying at night, the bat will eat it, even if it’s a yellow jacket wasp.

However, the chances of bats eating wasps are very rare as wasps mainly come out during the day because they’re searching for food, and bats seek to search for food in the dark. This difference in the time of the day often saves wasps from being eaten by a bat.

However, wasps searching for food during the day doesn’t mean they won’t be seen at night. Sometimes, wasps come home late, and often it gets dark when they’re out; a bat who just came out to find food since it’s dark will see the lonely wasp and eat it.

Some wasp species are also known to be nocturnal. They come out of their nests if the moon is out. A bat could spot the nocturnal wasp and consume it.

Yellow jackets aren’t an exception; bats will eat them if they spot one lurking in the dark. Wasps don’t have good night vision, so they won’t be as quick and won’t often know where they’re going when it’s dark.

Yellow jackets are the most aggressive and hostile type of wasps, but they will be no match in front of a bat in darkness. A bat would locate it with echolocation and eat it.

What Else Eats Wasps?

Wasps are aggressive insects that are omnivores as they feed on nectar and plants but also other insects; but in the wild, every animal has a predator and wasps can fall prey to many animals.

The bright colours of wasps make it easy to spot a wasp from afar. Their colours not only make it easy for predators to catch and eat wasps but also make them appealing to eat.

Wasps are of two types; solitary, which live alone and social, which live in a colony. Both of these types have many predators.

Wasps are predatory insects that eat other insects, but several insects eat wasps as well. Wasps have many insect predators, such as hoverflies, centipedes, dragonflies, mantises, moths, spiders, and robber flies.

Spiders also hunt and eat wasps; they have a unique strategy for killing wasps as they’ll make a web and catch wasps on it and slowly eat it every time they’re hungry.

Dragonflies have varying methods and strategies to kill and eat wasps. The dragonflies lay down to monitor the wasps as they float past them.

As soon as they’re close enough to the wasp, they open their lower jaws, catch the wasps and eat them. Adult dragonflies have a different strategy for killing and eating wasps; they will fly with their jaws open and eat the whole wasp during flight.

Birds love eating insects, and most birds, especially the smaller ones, mostly feed on many kinds of insects, including wasps, particularly solitary wasps, as they’re less hostile and aggressive and don’t put up much of a fight.

Birds such as warblers, orioles, chickadees, blackbirds, bluebirds, sparrows, grey catbirds and many other bird varieties love feasting on wasps.

Toads have no issues eating a wasp as they’re immune to wasp stings. They catch and eat wasps without being afraid of their stings.

You may now know that bats might eat wasps but if you have more questions then these FAQs might help you out:

It is unlikely that a bat would eat a hornet because hornets fly around during the daytime, whereas bats are nocturnal. Lizards, frogs and some birds will eat hornets.

Although a bat might eat a bee if it comes across one at night, because most bees are not active at night, it’s rare for a bat to come across a bee.

There are fruit bats, vampire bats and insectivore species that mainly feed on insects and wasps are included in their diet. However, wasps are only eaten on rare occasions, as wasps only come out in the day, and bats come out at night.