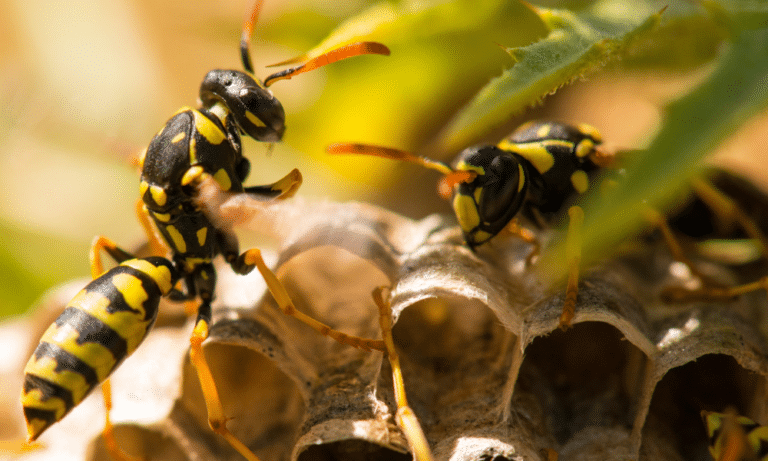 One of the insects you will find in your garden, especially during the warmer month, is wasps. Wasps are known to sting people and cause pain and inconvenience. It may seem like wasps are hanging out in your garden forever, but how long do wasps live in reality?

The queen wasp is the one that gives directions while the workers help in building the nest, feeding the young and also ensuring protection. The queen wasp lays the eggs until late summer, and around thirty adult wasps can house in one nest.

How Long is A Wasp Nest Alive?

You will usually spot wasps during the spring season. Wasps are can be aggressive with their stings and can cause harm, especially if you threaten their nest.

Wasps begin to build their nests in the spring until summer. A wasp nest can last up to three or four months. In some cases, predators can attack wasp nests, or the queen wasp can move.

If wasp nests are not disturbed, they will likely last for several months. As soon as the wasp colony is established, the worker wasps will protect the nest.

Wasps build their nests anywhere with structure and can take the weight of the nest. To ensure that the nest lasts for a long time, safe from predators, they can build them at high locations.

Usually, people assume that wasps build their nests high in the trees; however, that is not the case. Wasps can build their nest in any suitable place including guttering, roofing and atop sheds.

You can look out for wasp nests in your garden under garden sheds, playhouses or any cracks in the walls. In addition, wasps also like to build nests in secluded places like attics and basements.

Do Wasps Die Off in the Winter?

You may have noticed that wasps are not active during the winter. Usually, the time when you see wasps being most active is during the spring or summer. However, when the temperatures drop in winter, wasps die as they cannot handle the cold.

However, many adult wasps can still survive by hibernating in small, protected places during the wintertime.

The wasps which survive the cold are females who have been mated sexually. These females will hibernate in the winter. One of the mated female wasps is a mated queen.

The queen has responsibilities which include beginning the creation of the next nest. The females will build some cells, so they lay eggs. When the eggs hatch, the worker wasps will work on the nest while the queen lays further eggs.

The females will hide in remote places like basements during the hibernation period. It is not easy for wasps to hibernate because of insufficient resources, including food.

During the winter, the wasps do not stand a chance, and the colony begins to die. In most cases, even the queen wasp does not survive and can die. The queen wasp can die as other insects feed on it while hibernating.

Queen wasps hibernate during the winter when temperatures begin to drop. However, the queen wasp is not likely to survive during this time.

Out of all the queen wasps that go through hibernation, only a small handful will survive. The queens hide and hibernate in small places like crevices in trees and crack in walls.

The queen wasps will actively begin to look for places so that they can live during the chilly winters. These wasps like sheltered places to avoid the cold.

Unfortunately, while hibernating, the queen wasps can run into trouble. The queens can encounter some predators that hibernate, like spiders or other large insects. Therefore, most wasps will die during the hibernation period.

Wasps are insects that you will find active during the spring and summer months. These insects are known for their painful stings. However, during the winters, wasps seem to disappear.

When temperatures begin to drop, wasps tend to die.

The queen wasp can live through hibernation. However, after all the wasps which hibernate, one or two will survive. Worker wasps can live as long as 12 to 22 days while the queen for a year.

After hibernation, you may spot one or two wasps in your garden or home. You are unlikely to spot an entire swarm because it is difficult for them to live through the winter.