Unfortunately, many people do not expect wasps to be pollinators and associate them with being insects that can sting. But what plants do wasps pollinate? And do they pollinate all types of plants?

Wasps can successfully pollinate a range of flowers, vegetables and trees. However, they are best known as prolific pollinators of figs.

Wasps are not given enough credit as pollinators, but they contribute a huge amount to gardens through their ability to pollinate.

Largely, wasps are responsible for pollinating figs and are one of the reasons why figs even exist.

You may think of wasps as nothing but a nuisance. However, wasps are important because they can act as pollinators. In fact, wasps can pollinate flowers.

You will find that wasps have enough hair on their bodies to help pollinate. The hair on a wasp’s body is fine. As wasps land on a flower, it will inadvertently pick up pollen on the ends of its hairs. As it travels to a neighbouring flower, it will pollinate it.

Wasps are far from the most effective pollinators. But this doesn’t mean they don’t pollinate flowers at all.

One of the things which wasps pollinate includes vegetables.

When wasps can’t find other insects to eat they also like to consume nectar from plants. Wasps will visit flowering vegetables and consume the nectar. This spreads pollen from one plant to another.

As wasps are likely to visit one vegetable flower and then a neighbouring one, they will help to pollinate vegetables.

Other than fruits and vegetables, wasps can also pollinate trees. Some of the trees which can attract wasps, especially yellow jackets or paper wasps, include many varieties of fruit trees. Wasps love to feed on sweet things so will naturally gravitate towards trees bearing fruit.

One of the reasons why a fig tree exists is because of wasps. Wasps that pollinate figs are known as fig wasps. There are different species of fig plants, each having its own fig wasps.

The female wasp works to pollinate the plant by entering an unripe male fig. Next, the female will lay eggs inside the male fig. Once the eggs hatch, the newborns mate and will chew their way out of the plant.

It may come as a surprise to learn that figs aren’t actually a fruit but are an inverted flower.

These tiny wasps play such an important role that fig trees would not exist without them – in the wild, at least. Commercially cultivated figs no longer require wasps.

What Other Plants do Wasps Pollinate

Wasps will naturally and indirectly pollinate plants which they are attracted towards. One of the plants which wasps will be drawn towards are those infested with garden pests.

Wasps primarily feed on garden pests such as flies or aphids. Wasps will be drawn towards an aphid-infested plant to feed on the aphids. By landing on the plant, the wasp will pick up and distribute pollen between plants.

When we think about pollination, we will usually think about bees. Wasps do not come to mind because bees are known to be the best pollinators. What makes bees so great is the fuzziness on their body. Wasps do have some body hair, but they cannot compete with bees in terms of pollination as it is significantly less.

Bees have hair that attracts pollen through static electricity. On the other hand, wasps have bodies built for hunting and scavenging. Wasps are not supposed to be pollinators, and they only perform it as an indirect activity.

Therefore, wasps will be pollinating amidst their regular routine and not on purpose.

So, are wasps good pollinators? Not really. There are far more effectively pollinators that can be attracted to your garden. But it is still a good idea to understand that there are minor benefits to wasps.

Wasps are usually considered to be a nuisance because they sting and can be dangerous to children and pets. However, wasps serve more than this purpose and can pollinate plants. Some of the plants which wasps pollinate include different fruit trees, flowers, and vegetables.

Although wasps are pollinators, they are not as effective as bees.

Bees have hairy bodies which pick up pollen. Although wasps have hair, it is not enough to hold pollen in the same quantities.

However, wasps contribute heavily to the fig plants as they pollinate them. The wasps which pollinate figs are known as fig wasps. Some other plants which can also attract wasps include those infested with aphids or other pests. 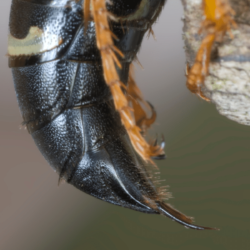 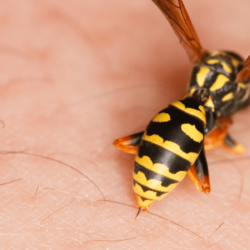