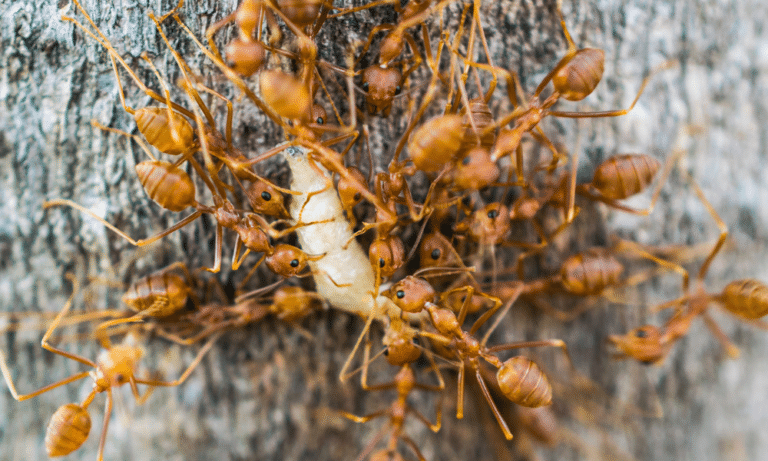 Killing ants really isn’t that difficult. Whether you use ant powder (which we’d advise against), borax, coke, boiling water or just the bottom of your shoe – it’s far from difficult. But, the question is: Does killing ants attract more ants?

The pheromones that ants release signal to the other ants about danger. Ants are good at communicating, and an ant dying lets its fellow colony members know about death.

Ants, however, do not come to the scene of death to attack you or seek revenge. On the contrary, ants come near the dead and as a response to any danger.

Do Ants Get Sad When Other Ants Die?

Ants do not grieve or get sad when other ants die. This is often asked because the ritual ants have to bury the dead looks like a human’s funeral. However, on the contrary, ants do this for selfish reasons.

When ants realise that one of them is dead, they will come to the dead body and pick it to drop it at the ant cemetery. Ants pick up dead ants to stop the risk of spreading infections.

The graveyard ants dump dead ants in is called a midden. If you follow ants carrying a dead ant, you will find other dead ants too. The midden is like a cemetery, but ants also use it to dump waste and contamination.

Squashing ants means killing them, and hence, it will attract more ants. When ants die, they release pheromones, which signals other ants that there is danger ahead.

But, if ants know there is danger, why would they go to that place?

Ants are smarter than what we give them credit for. Ants will inspect the place and the dead body to ensure it is dead before carrying it off to the cemetery. The entire behaviour of ants depends on signalling.

When an ant dies, it releases oleic acid after two days, which signals to the ants that one is dead. It is only after detecting the acid’s scent that ants will carry the dead to their grave.

Many species of living things pretend to play dead in situations of threat and danger. Therefore, it is only natural to wonder if ants play dead too.

The most common species of ants known to play dead are fire ants. Fire ants are more aggressive than other species of ants. Even among fire ants, playing dead is more common in young ants. As ants get older, they grow out of this behaviour.

Ants will avoid other dead ants only if they have released them in the midden or there is still danger around. When an ant dies, it releases pheromones, which signal other ants that there is danger.

Upon arriving at the situation, other ants will not realise that the ant is dead because it takes time for the dead ant to release oleic acid. Therefore, the ants test the situation to see if there is danger around. If there is imminent danger, the ants leave the body to pick it up later.

Against popular belief, ants do not eat dead ants.

When a queen ant dies, it is more of a big deal than the death of other worker ants. The queen ant is the one that reproduces and lays so many eggs. Hence, you never see any queen ant outside the nest. Instead, the queen ant stays inside the nest, guarded against any danger.

The worker ants will carry the corpse of the queen ant to the midden when it dies. The death of the queen ant is significant as the colony will no longer thrive. Eventually, when the existing ants die, and there is no queen to reproduce.

Therefore, when a queen ant dies, so does the whole colony.

How to Get Rid of Ants Without Attracting More

If you squish ants in your home, you will undoubtedly attract more. It can be annoying to deal with so many ants and dangerous at the same time. If the ants belong to a species that bites, they can bite you or your family members.

These exterminators will do a thorough cleaning and reach corners you cannot.

However, it is recommended to leave the space that has been freshly sprayed with chemicals for a day or two to make the effects go away.

If you wish to avoid pest control, a great method is to bait and poison the ants. The ants that come for the bait will take the poison to the nest. Hence, this method is effective but takes time.

If you have ever squished an ant, you will notice that more follow. Killing an ant will bring more to the place because when it dies, it releases pheromone, which sends a signal of danger to the other ants.

When an ant dies, the other ants do not feel any remorse for it. The release of the oleic acid sends a signal to the ants that one of their own is dead.

The ants carry the dead to their graveyard called the midden to avoid spreading any infections in the colony.