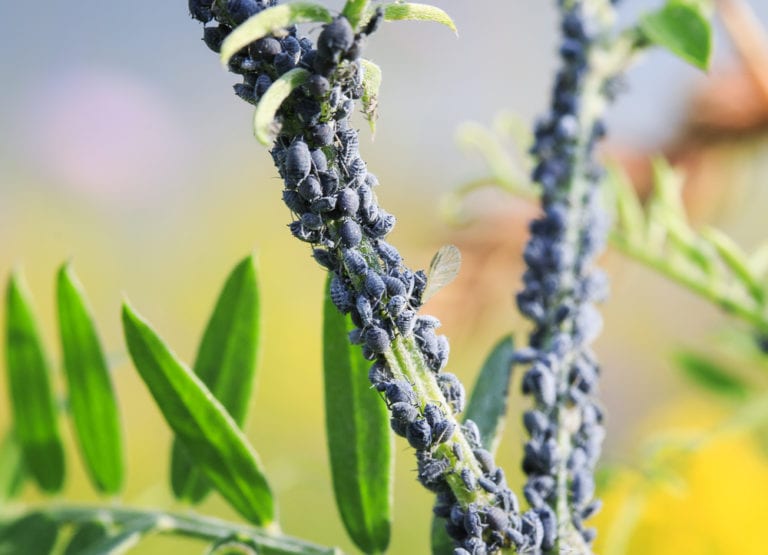 Most people can identify aphids because of their small, bright green bodies. But with so many different species, are they all the same colours and can aphids be black?

Can Aphids Be Black?

Aphids can be black. There are several species that are predominantly black including Black Bean Aphids, Black Cherry Aphids and Permanent Foxglove Aphids.

What Species of Aphids are Black?

Many different species of aphids appear black. Here are some of the more common of these species of aphids. We will also list what kind of plants they tend to inhabit to help you identify what might be in your garden.

This is the most common species of black aphid, and they are often known just as blackfly. These aphids are often very dark black and can be identified by the tiny white spots that sometimes appear on their backs.

They will inhabit both plants and crops, but they are most commonly found on a common spindle.

These species are often black or a very dark purplish-brown colour. As you may infer from the name, these aphids are most commonly found inhabiting cherry trees, and they can be quite problematic for them.

This aphid is also known as the Camelia aphid or the Tea aphid. This is because these small black insects can be found inhabiting tea, citrus and camelia plants in large amounts.

They have also been known to lay their eggs on coffee plants and in mango trees.

These aphids are almost all entirely black, with a few individuals sporting the white waxy spots similar to that of the black bean aphid.

You will only find these aphids on foxglove plants, so if you have ones inhabiting different plants, you know that it must be a different species of aphid.

More species of aphids can appear black, but these are the species where most of the individuals are black and can be identified this way.

Are all Aphid of One Species the Same Colour?

There are colour variances within species, but some are instead a very dark brown colour. This can happen within the colonies as well.

Most aphids will not mix with aphids of a different species, so the colonies inhabiting your plants will all be from the same species.

So, even if there are other colours in the individuals ranging from green to brown to black, they will all be from the same species of aphid, and you can often tell which species it is by the plant they are inhabiting.

Are the Black Insects on my Plants Aphids?

The majority of the time, the small black insects on the leaves and stems of your plants will be some species of aphid.

However, other small black insects may be misidentified. It is always possible that the insects on your plants are not aphids, and therefore you may need to deal with them differently.

Here are a couple of examples of the other insects that may be on your plants.

Spider mites are similar to aphids in size and appearance. They are tiny black insects, and are also pests and can cause damage to your plants, so they should be removed.

These small creatures are more commonly found on houseplants.

These insects can usually be differentiated from aphids because they actually eat the plant leaves they inhabit. You are most likely to see these insects in areas such as vegetable patches. Aphids don’t actually eat plants.

To summarise this article’s main points, there are several species of aphids that are black. These species include the Black Cherry Aphid and the Black Citrus Aphid.

Not all aphids are, however. Some of the tiny black insects on your plants may not be aphids. Instead, they may be spider mites or flea beetles.