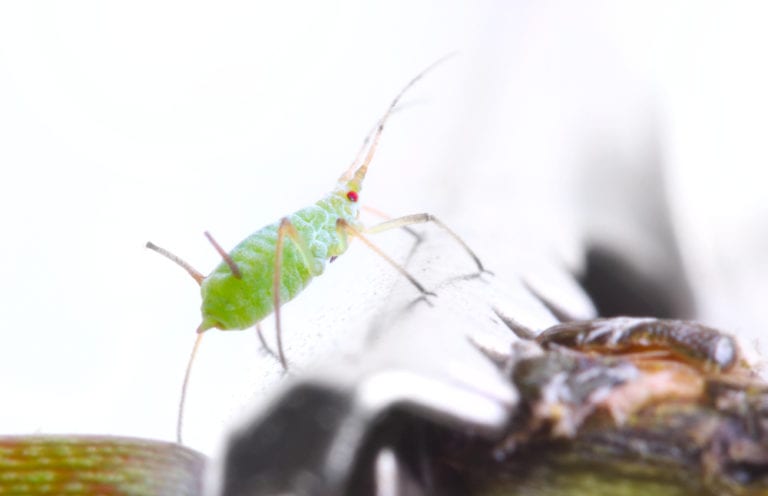 Aphids are classified as pests for a variety of reasons. But can they be a direct nuisance to humans and cause harm and bite?

Aphids cannot bite humans. Their mouth contains needle-like parts which they use to pierce plants for food. They are unable to bite humans.

Are Aphids Able to Bite Humans?

Aphids cannot physically bite humans. They have very specialised mouthparts for how they feed off plant tissue and the way these parts are structured means that they cannot bite humans.

If they tried, they would be unable to chew through the animal tissue that is human skin.

Their mouthparts are akin to needles as they pierce their plants for food. There have been very minimal instances of people reported being injected with the aphid’s needle-like mouth. This usually occurs if a person smells like a plant, as the aphid will confuse it and try to draw the sap out of a human.

Being pierced by an aphid is not known to cause much harm, but the area is often said to be red and has minor swelling for a few hours. Some people have experienced a small rash, but if you are concerned that you may be having a serve reaction, contact a professional.

Can Aphids Bite Other Insects?

Their mouths function in the same way no matter what their prey is. Aphids subsist on plant sap and do not consume animal tissue. Therefore, they will not bite nor chew on the flesh of any other animal, including other species of insects and aphids.

That being said, there has been a small amount of research conducted that looks into the cannibalistic tendencies of aphids.

There have been a few instances where aphids will use their mouths to probe other aphids, likely either due to scent confusion or to try and get sap or honeydew from the other aphids.

Though with such little research being conducted, it is difficult to obtain more evidence surrounding these cases.

How Do Aphids Eat?

If aphids do not actually bite animals or plants, then how do they actually eat? The unique mouth parts that do not allow them to chew have actually occurred through evolution so that they are optimised for feeding on their main source of food: Plant sap.

They do not bite into plants, but instead, they pierce them with their needle-like mouthparts we have previously discussed. This injection allows them to draw the sap from the plants and consume it. This needle they inject is microscopically thin, so it cannot be seen with the naked eye.

After they have injected and drawn out the sap, they leave some of their saliva inside the leaves or roots through the tiny hole they have pierced. This prevents the plants from healing and is one reason that plants infested by aphids often wilt rather quickly.

To summarise, let’s look over the main key points. Aphids cannot bite humans, animals or plants as they do not have the mouthparts to do so.

Instead, they have a needle-like mouthpart that injects plants to suck the sap out of them. They deposit their saliva in the plant, which prevents healing and causes plants to wilt quickly.

If you have been bitten when dealing with aphids, the likely culprit is an ant or a ladybug.