An aphid infestation can be concerning to any gardener, but as butterflies and bees aren’t the only pollinators, and some types of flies pollinate as well, is there a chance that aphids aren’t only bad? Do aphids pollinate too?

No, aphids don’t pollinate plants, but they play a very important role in a plant’s pollination. Aphids attract hoverflies, some of the most prolific pollinators in the wild.

Aphids do not pollinate plants but play a major role in the pollination process for many plants. Aphids are helpful in pollination because they attract hoverflies, one of nature’s most prolific pollinators.

However, they also attract ants that pollinator insects don’t like, so they don’t stay on the plant for too long or may not land on the plant if they spot ants.

To put it simply, aphids are different in pollination compared to bees, butterflies, moths, and hoverflies because aphids don’t take part in the transfer of pollen from flower to flower.

You can often see them crowding flower and plant foliage, but that doesn’t mean they’re there to pollinate.

Pollinators look for pollen and nectar in a plant, but an aphid’s goal is to find a plant’s phloem cells and extract its energy. Phloem tissue is found under the plant’s epidermis layer.

The main function of this layer is to transfer micronutrients to a plant.

Aphids use their mouth to snip through the plant’s epidermis, find the phloem tissue and suck the plant’s photosynthates which are the byproducts of photosynthesis.

Unlike bees and butterflies, aphids don’t pollinate plants, but in some ways, they help the plants in the pollination process.

Aphids are helpful in pollination because they attract useful pollinators like hoverflies. Hoverflies not only pollinate the flowers but also feed on the aphids. This way, aphids indirectly play a helpful part in the pollination of many plants.

Aphids may not directly pollinate plants, but they can be helpful as very beneficial pollinating insects start visiting the plants. The attracted hoverflies eat the aphids, lessening the aphid infestation and then going on to pollinate the plants.

Another way aphids indirectly help with the pollination of many flowers is by aphid-mimicking orchid flowers. The species of orchid Epipactis Veratrifolia, according to many researchers, makes chemical compounds that attract female hoverflies.

An interesting fact about this chemical compound is that it is very similar to the alarm pheromones that an aphid secretes when they sense danger.

This is another way in which aphids indirectly play an important part in the pollination of plants.

Another study for Cypripedium subtropical orchids revealed that these orchids weren’t only secreting chemical compounds that were attracting only hoverflies.

The orchid even has markings resembling an aphid colony on its labellum, the lip of the plant, and a landing platform for many pollinators.

Yes, hoverflies do eat aphids. This is why hoverflies are often attracted to plants with an aphid infestation. They’ll visit the plant, eat the aphid, and then pollinate while there.

No, bees do not eat aphids. However, like ants, bees will eat the honeydew that aphids secrete as it is sweet and bees enjoy most sweet treats.

Are Aphids a Problem?

An aphid infestation can be a problem for your garden plants because they can do several things that harm plant health. An aphid can attract hoverflies that are good pollinators, but aphids also attract harmful insects like ants.

Ants are attracted to aphids because they love aphids as they work with them to harvest sugary honeydew that comes from aphids when they feed.

Ants are harmful to flowering and fruit plants because pollinating insects avoid plants with ants on them. Ants also kill predatory insects that will eat aphids such as ladybugs or lacewings.

Aphid infestations can also be bad because aphids can harm a plant’s health by eating leaves that often lead to yellowing leaves with holes in them, dead shoots, and poor plant growth.

Aphids also leave honeydew behind, which not only attracts ants but can also create sooty mould on plants. Aphids are never alone; they’re always in clusters, making their damage concerning for a plant’s health.

Some species of aphids inject toxins into the plants they feed on. This can lead to destroyed or distorted leaves.

Aphids are some of the most annoying pests a gardener may come across. An aphid comes in clusters, they look gross, and they cause major damage very quickly to most plants they feed from. 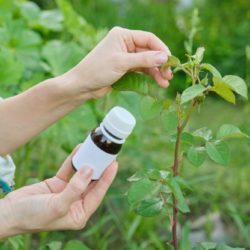 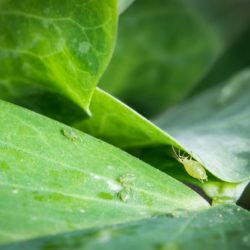