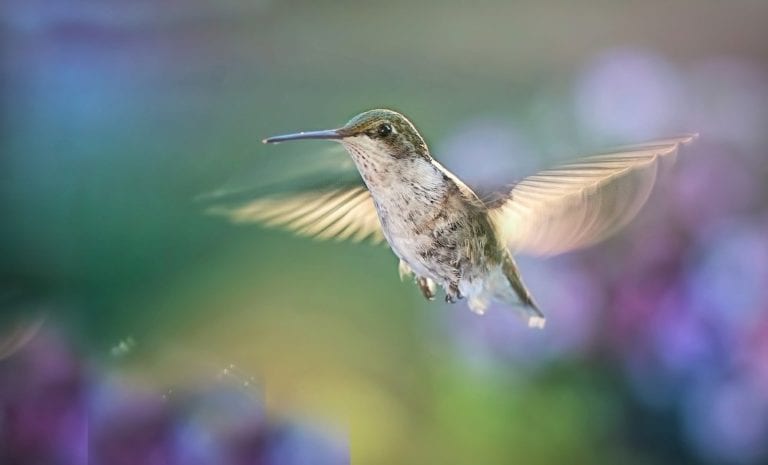 Hummingbirds are known for their small size, long beaks and bright beautiful feathers. Whilst they are most commonly known to eat nectar, their diet also extends to certain species of insects but are one of those insects aphids or not?

What Insects Do Hummingbirds Eat?

Hummingbirds will eat a large range of insects, one of the most common insects being aphids. Let’s have a look at some examples of what insect hummingbirds eat.

We’ve already said that aphids make up a large portion of a hummingbird’s insect diet. This is because these tiny insects provide lots of protein for the hummingbird and are also very sweet-tasting, which is a big preference of most hummingbird species.

These insects are slightly bigger than aphids, but the two species are often found together. This means that hummingbirds, being opportunistic feeders, will also consume ants if they find them near aphids.

Lots of beetle species prey on aphids, meaning that hummingbirds can also easily find them on aphid infested plants. Common beetles include the Asian beetle and the Potato beetle.

Even though most of their diet is made up of nectar, hummingbirds can sometimes eat their whole weight in food during a singular day. That takes a lot of nectar to find and is often filled out with insects such as aphids.

The Rufous Hummingbird will eat a variety of insect species, including aphids. They are very protective of food and will consume a large amount in a singular day.

This species of hummingbird will eat any type of insect it can find. This means that it will also consume aphids, though it is not one of their primary predators.

Whilst this species will primarily hunt insects when in flight, they have also been known to pick insects off of leaves. These insects include aphids and caterpillars.

There are more species of hummingbirds that will eat insects and aphids, but these three are the most likely ones you are to see consuming aphids in your garden.

Can You Use Hummingbirds as Biological Control?

Adding brightly coloured and tubular plants to your garden will attract more hummingbirds to your garden as they are a great source of nectar. They will still consume the insects for protein as the nectar does not provide them with that.

Will Hummingbirds Eat All Aphids in the Garden?

The simple answer to this is no.

There is no guarantee that you will even be able to get a hummingbird to come and visit your garden. Many species have limited ranges and if you are anywhere in Europe, there is not a single species of wild hummingbird in your continent. Some people claim that they have spotted a hummingbird in Europe but it will often be a hawk moth.

If you are wanting to use biological control you have a much better chance using an insect species such as the Asian Beetle.

There are also other methods to remove aphids from your plants which include spraying them with water and removing them by hand.

Aphids reproduce extremely quickly and since hummingbirds are not one of their primary predators, they will not reduce the population enough to control it.

If you are in the UK and think you have seen a hummingbird in your garden, you most likely saw a hummingbird hawk moth. A common UK moth species that have been misidentified as a hummingbird several hundred times. This misidentification occurs because of the similarities in their appearance.

Sadly, unlike various hummingbird species, this species of moth does not consume aphids. They are herbivores and only consume plant matter such as nectar.

Using other methods to remove aphids is recommended as you cannot rely on hummingbirds to control the aphid population in your garden. But you need to be careful what methods of removal you use as some of them can cause harm to other creatures, including your hummingbird visitors.

Using harsh soaps or insecticides will damage aphids and plants, but, as hummingbirds consume the dead insects or plant matter, they ingest the insecticide themselves. This can cause them to be very ill and it also means that the insecticide will continue to move up into the food chain.

To avoid this, you should use natural means to remove aphids. You can use natural soaps which have no chemicals and will not cause your plants or garden birds any harm. Placing banana and orange peels around the base of your plants will drive aphids away whilst not impacting the birds that visit your garden. Or you can simply blast them off using just water and the power of a hose.

To summarise, certain species of hummingbirds do eat aphids though they are not one of their primary predators.

Hummingbirds cannot be used in biological control as they have very limited ranges. You should use other methods of aphid removal as aphids will reproduce much quicker than the hummingbirds will eat them.

Make sure to use natural methods of removing aphids from your garden. This will protect both your plants and the birds that feed in your garden and it will prevent insecticides from moving up through the food chain.