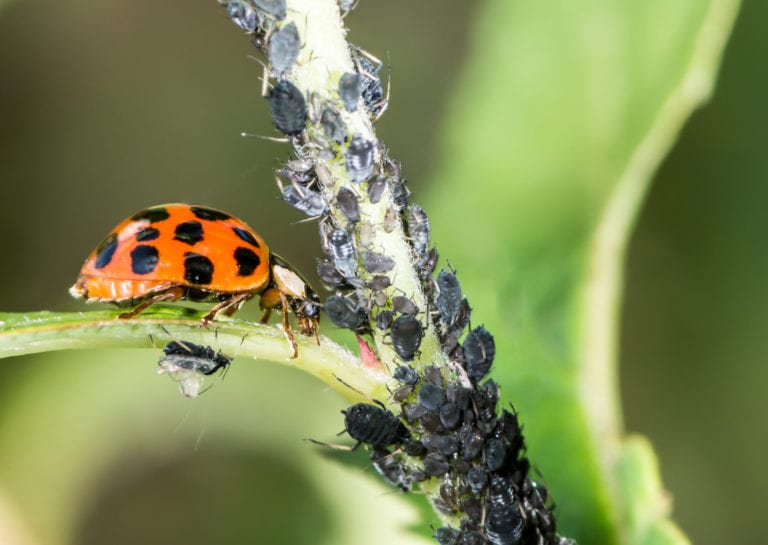 Ladybugs, also known as Ladybirds or Asian Beetles, have a large diet that consists of many species of insects. But do they consume one of the most notorious garden pests, aphids?

Ladybugs do eat aphids. This is one of the simplest questions to answer regarding aphid control. The main predator of aphids is ladybugs. This is why ladybugs are often used as a biological control when trying to get rid of aphids.

Ladybugs will eat almost anything that they can, this includes aphids.

Insects make up most of a ladybug’s diet, and one of their favourite prey appears to be aphids. Throughout the world, they have been used to control aphid populations and it is one of the reasons for their introduction into countries outside of Asia.

They are not fussy about the aphids they will eat, consuming practically any aphid species they come across. Because of this, they have become a good friend to gardeners by helping to keep their flowers pest free.

What Do Ladybugs Eat?

As mentioned, these bugs will eat just about anything they can. This is because they are opportunistic hunters, meaning that if they are able to find a source of food then they will eat it. But they do have some main components of their diet which are listed below.

Aphids are a ladybug’s favourite food, which in turn often makes them a gardener’s favourite insect.

Ladybugs will also eat mites, particularly spider mites. These mites are similar to aphids in that they consume the plant material and can eventually damage the flora they inhabit.

Thankfully ladybugs will eat them, eliminating another pest from your garden.

These small white insects are often mistaken for aphids, due to both their similarity in looks and diet as they consume plant sap. And the ladybug finds similarity in eating them both.

There are other insects that ladybugs will eat, but these are the main ones that they appear to prefer.

Do All Ladybugs Eat Aphids?

With there being over 40 different species of ladybugs in the UK alone, it is not surprising that there is some difference in diet between ladybugs.

Can Ladybugs be Used in Biological Control?

Biological control is a pest control method wherein natural predators of the pest are released to control the population. Ladybugs can be used as a form of biological control.

They are a widely spread insect and being a primary predator of aphids, they will do their job effectively.  There are suppliers of biological control where you can procure ladybugs if you are experiencing a pest problem.

Are Ladybugs Pests Themselves?

They do not harm your plants in any way, and they don’t attract any other pest species. That being said, ladybugs have some drawbacks in your garden.

Some ladybugs consume plant matter, so be careful what species you use as biological control. As well as this, they can bite you. This is not because they are aggressive, but because they will bite if disturbed or frightened.

Of course, because of their tiny mouths, it is not a searing pain, but some people have been found to have allergies to ladybugs and therefore, their bites.

What Else Eats Aphids?

Aphids are a common prey item for many different species of insects and animals. Ladybugs are not the only things that will eat aphids, take a look at some other aphid predators below.

These insects look similar to aphids but are slightly bigger and can fly and hop. They use their curved jaws, which they acquire in their larvae stage, to grab and consume the aphids easily.

In their larval stage, hoverflies look like maggots. They live in similar areas of the garden to aphids and so will prey on them until they move on to their next life stage.

Many species of birds are believed to eat aphids, one of these species is the Blue Tit. There is also evidence showing that fewer aphids in gardens are frequently visited or occupied by birds.

There are more aphid predators than just these three, and you can procure these from suppliers of biological control to deal with the pest problem in your garden.

Aphids are tiny and can in no way kill ladybugs. However, they do have protection from the ants in your garden.

Ants will protect aphids because the aphids produce honeydew, which is a favourite food of the ants. Therefore, sometimes ladybugs and ants will fight, not only does the ladybug get the prize of the aphids if it wins, but it will often also then proceed to eat the ant as an extra food source.

To summarise what we have talked about, ladybugs are a primary predator of aphids, and aphids make up the majority of their diet. Ladybugs will also eat other garden pests, including spider mites and whiteflies.

You can use ladybugs to control the population of aphids in your garden and buy them from biological control suppliers.

Some species of ladybugs do not eat aphids and some subspecies are even herbivores. Ladybugs will not become pests in your garden and will provide you and your plants with many different benefits.