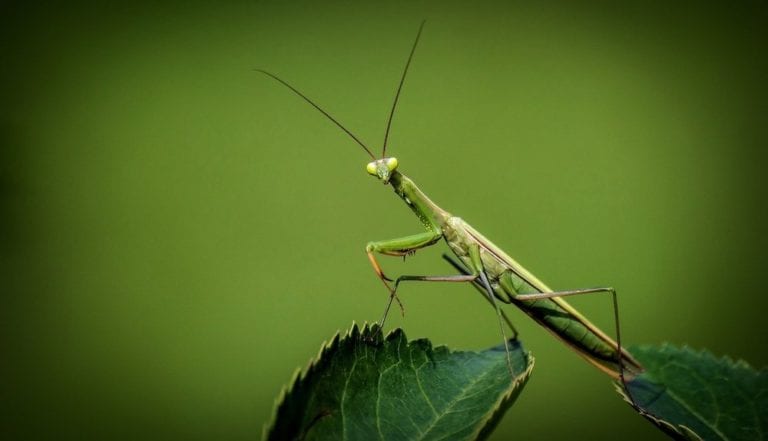 Praying mantis will consume a large amount of food from a variety of different sources. But does this carnivore’s diet extend to the garden pest, aphids?

Praying mantis do eat aphids but it is unlikely you will find praying mantis casually roaming your garden and using them as biological control is not feasible. Instead, try using ladybugs or Asian beetles to get rid of aphids.

What Do Praying Mantis Eat?

Praying mantis are carnivores so will not consume any plant matter. Their diet consists almost entirely of insects, including the notorious aphids. Let’s have a look into their diet in a little more depth.

Aphids are a favourite of newly hatched Praying Mantis. Their soft bodies and sweet taste make them very desirable to new-borns and their small size make them very easy to catch.

Once praying mantis reach adulthood, they will eat larger insects including beetles. They also eat Asian Beetles, a primary predator of aphids. This makes both beetles and praying mantis a great addition to the food chains and the ecosystem.

You have likely heard about praying mantis eating their mates and it is a true fact. But as well as this, they will even eat their own siblings if they are hungry enough.

The diet of a praying mantis seems almost never-ending with their gigantic appetite. They will eat almost any insects they can find but these are the most well-known prey of the praying mantis.

Can Praying Mantis be Used in the Garden?

Due to their lack of plant damage and their large appetite for aphids, it would seem very beneficial to release some of these insects into your garden.

However, many mantis species have restricted ranges meaning they cannot be found in the wild in many areas like Europe, including the UK. This means that you will not be able to procure any praying mantis from biological control suppliers in the UK.

There are some areas where you can do this in the USA, but you should research the laws in your area before doing so.

Can Pet Praying Mantis be Used in the Garden?

You may be surprised to learn that many species of mantis are a popular pet throughout the world, even in the UK. Whilst they may not be wild and free to roam around your garden, they can still help with reducing your aphid population.

In captivity, their diet remains the same and they will happily eat aphids. If you see a group of aphid eggs on a plant leaf, place them in with your pet mantis. Praying mantis will eat the eggs and if not, they will eat the aphids that later hatch.

With a well-tamed mantis, they will even eat off of your finger. So, if you’re okay with handling aphids then you can pick them off your plant and feed them directly to your pet.

Praying mantis have a reputation for being scary and ferocious. Whilst they are like this to other insects, praying mantis are not harmful to humans.

Most species of mantis, including the praying mantis, are very docile and are happy to be handled by their owners. They have been known to occasionally bite, however, this is usually if they are startled and provoked. Even in this situation, their bite is not venomous and will not cause any more harm than a little stinging.

Do Other Mantis Species Eat Aphids?

There are over 2000 different mantis species around the world, all of which are predators. The primary component of any mantis’ diet is insects, meaning that it practically any mantis will prey on aphids. This includes other popular species of pet mantis such as the ghost mantis and the orchid mantis.

To summarise all of the mantis information in this article, here are a few key points. Praying mantis are carnivores and will eat almost any insect including aphids. There are over 2000 species of mantis, all of which eat insects.

You cannot release a mantis into your garden in many areas across the world to control your aphid population and you cannot obtain them from any UK biological control suppliers. Keeping a pet mantis can help reduce aphids in your garden as you can feed them any aphids that you can find.