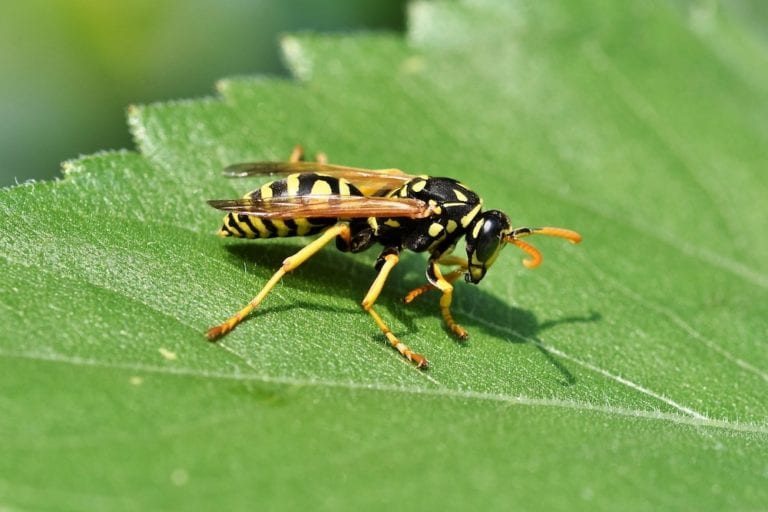 Despite being very beneficial to your garden and the environment, wasps are often feared. But is one of their benefits that they eat the pesky aphids in your garden?

Wasps do eat aphids. Wasps are predators and are not fussy when it comes to their diet. When younger, they eat invertebrates and this can include aphids. As they mature, they concentrate on eating sugars but will feed their offspring aphids.

A wasp’s diet consists primarily of invertebrates, this includes aphids. Wasps are predators and they are not particularly picky when it comes to their prey. However, there are many wasp species that change their diets after becoming adults. A lot of them will proceed to only eat sugars once fully grown, but they will still kill aphids and feed the pests to their young.

What Else Do Wasps Eat?

Being an apex predator, the diet of a wasp varies and can be impacted by both the specific wasp species and the stages of the life cycle. As we mentioned, it is primarily young wasps and larvae that eat insects such as aphids, but this isn’t true across all species of wasps. But with there being over 7,000 species of wasps in the UK alone, we can’t look at every single one’s diet. However, we will look at the most common prey species consumed by wasps:

With many wasp species being known as spider wasps, it is not surprising that spiders are a common prey item. They are usually hunted by more solitary wasp species which paralyse them and let their young eat them alive.

Flies are not dissimilar to aphids, just larger in size. They are another insect that wasps will have no problem consuming on a regular basis.

Certain species of wasps have caused problems because of the number of caterpillars they consume. With incorrect introductions into different countries, their consumption of caterpillars has occasionally caused native bird populations to decline due to lack of prey.

Wasps will hunt other prey items, with their young eating almost any species of invertebrate. But these creatures listed above appear to be the most common prey items for most different wasp species.

Adult wasps may kill aphids, but they allow their young to consume the prey rather than themselves. This is because adult wasps no longer require any protein to grow so eating aphids would have very little benefit for them. Whilst wasp larvae would gain a lot from eating aphids.

In a wasp’s life cycle, the adult stage is very short, and they do not live for long.

Some of their carbohydrates will come from aphids though, in the form of honeydew which is a sugary solution produced by the aphids.

It is always a worry that a predator of a pest will become a pest itself. In actuality, there are many benefits to having wasps in your garden. Because they feed on nectar, they become pollinators as they move from one plant to another around the garden.

As well as this, they will also help you to control other pests in your garden. Along with aphids, they will eat ants and flies which can both become pests and cause problems for your fauna. However, there are drawbacks to wasps which cause some people to consider them as pests.

Most of the wasp species in the UK are social species and they can become pests more quickly than solitary species. These wasps will build their nests in anything either natural or man-made. This means that they may make nests in your building structures and because of their aggressive nature they can issue quite painful stings if you get too close. But because of their benefits to the ecosystem, you should not kill wasps and instead can call a professional to remove them safely and without harming them or the environment.

To summarise everything talked about, young wasps and larvae consume aphids, but adults do not. Adults only require a diet of sugars for energy.

There are benefits to having wasps in your garden, such as the removal of pests and the increase in pollination. But they can become pests to both humans and other predator species.