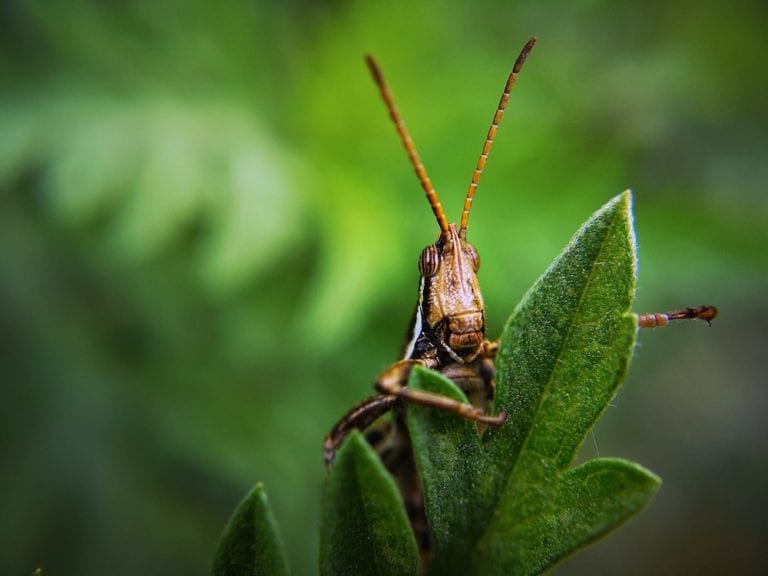 Aphids are garden pests that have an incredibly high number of predators. Many of these predators can be used in biological control, so, let’s look at what bugs eat aphids?

There are a number of bugs that eat aphids. These predators including ladybugs (or Asian beetles), praying mantis, wasps and some species of flies. Ants, however against popular beliefs, do not eat aphids.

Ladybugs, or ladybirds or Asian Beetles, are a primary predator of aphids meaning that they will consume a large amount of the insects in just one day.

These beetles are very beneficial to your garden, as well as eating aphids, they will eat other pests in your garden such as spider mites. They are also accidental pollinators and will attract other beneficial insects to your garden, helping to keep it healthy.

Ants are commonly seen around plants with large aphid infestations, but they do not actually eat aphids. They will protect aphids from other predators because aphids produce a solution called honeydew.

This honeydew is incredibly sweet because of all the sap that aphids consume, and it is a favourite food of ants. Because ants offer aphids protection, the aphids will, in turn, let the ants ‘milk’ them for their honeydew. No other insects appear to have this relationship with aphids, despite not being the only species to feed off their honeydew.

Praying mantis will eat almost any insect they can, including aphids. Young praying mantis in particular like aphids because their small structures, soft bodies and sweet taste make them very easy and desirable prey. Many people keep praying mantis as pets and will feed them the aphids and aphid eggs that they find in their garden.

There are certain species of flies that eat aphids and other species that do not. Hoverflies and lacewings are particularly big fans of aphids. It is most commonly their larvae that eat aphids, and they are able to catch the tiny insects with their curved mouthparts.

However, if you are thinking of the common house flies, they do not eat aphids. Much like ants, house flies love to eat the honeydew which is produced by aphids and whilst they will not protect ants from other predators, they will benefit from their presence.

Wasps will eat a large number of aphids however they will only do so in certain stages of their life cycle. Young wasps require a large amount of protein to grow to adulthood. It is for this reason that they are big fans of aphids and will consume a large number of them.

Some wasp species will sting and paralyse the aphids and then allow their young to eat it alive. This is more common in the solitary species of wasps as some social species do not eat aphids.

Whilst some adult wasps will kill aphids, there are no species of adult wasps that will consume aphids. The life of an adult wasp is very short, and they do not require protein to continue growing. For this reason, adult wasps will only consume sugar. Meaning that some wasps will eat the honeydew produced by aphids but if they are fully grown then they will not eat any species of aphid.

Do Aphids Eat Other Aphids?

There are some species of insects, including ones mentioned here such as praying mantis and ladybugs, that will eat others of their own species. Aphids are not one of these insects because they are completely herbivorous.

They only consume plant matter, and their diet is limited to one item. Sap from plants and trees which can be obtained through plant leaves, stems and roots. Aphids are also not known to kill one another though they will vacate plants and start new colonies if the area becomes too crowded.

It is hard to conclude by stating every single species that eat aphids, but there are a few key points to pick up.

Aphids are herbivorous and do not eat one another.

Most opportunistic insect predators will feed on aphids and consume a large amount. Some insects, such as wasps, will only eat aphids during a certain stage of their life cycle. There are various insects that do not eat aphids but instead will eat the honeydew they produce. Ants are well known for this and will protect aphids from other predators to keep their food source.