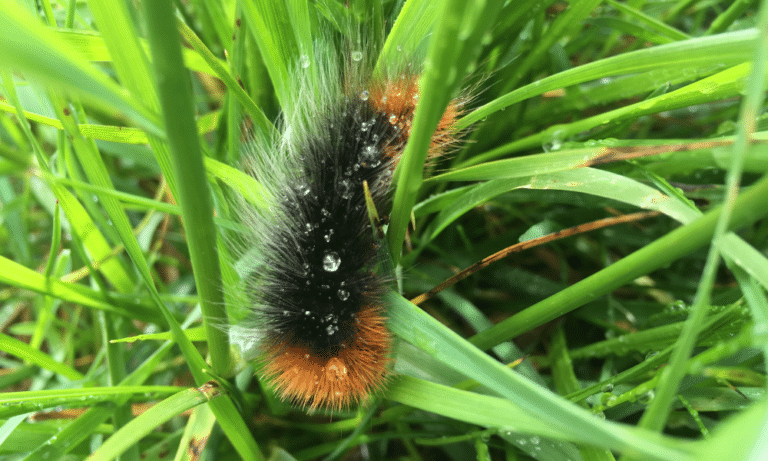 No, black fuzzy caterpillars are not poisonous. They are, in fact, harmless. They don’t inject any sort of venom.

A woolly bear caterpillar may be all black, or may sometimes have thick red stripes. Giant leopard moth caterpillars are almost identical, and only their stripes are thinner. These caterpillars have stiff black spikes that make them look woolly, fuzzy, or spiky.

These spikes do not sting nor are they poisonous. These caterpillars are safe to hold as they don’t even bite. They’re completely harmless, and they’ll curl into a ball when touched. Their appearance is simply a facade to scare potential predators.

Where Can You Find Black Fuzzy Caterpillars?

You can easily find a black fuzzy caterpillar in your garden. Despite their unusual appearance, they’re actually pretty common, in summer especially. Black fuzzy caterpillars can appear on sunflowers, willows, magnolias and any food plant such as cabbage or citrus trees.

They’re very easy to identify as they have stiff black spikes that make them look very furry. Woolly bears can be completely black or may sometimes have reddish or brownish patches in between, and giant leopard moth caterpillars have thin reddish lines.

Even if they look very intimidating to you with their vibrant colours and spiky exterior, black fuzzy caterpillars do not sting or bite.

Although you can hold them, the spines could feel irritating on your skin because the spines break off into the skin after you’ve touched them, but the caterpillar won’t bite or sting you. Their spines are also used to ward off any nearby predator, like a bird, from picking them up.

Can Black Fuzzy Caterpillars Kill You?

Woolly bears and giant leopard moth caterpillars are completely harmless, they won’t bite or sting you, and they simply roll up into a ball and pretend to be dead if you pick them up.

The touch of their prickly skin seems uncomfortable to some, but that’s the most they can do. Black fuzzy caterpillars can’t kill you. However, the caterpillars that can kill you are usually visually unappealing and have bright colours that make it look obvious that these caterpillars want you to stay away.

One thing that could be worrisome for you is that upon picking up a black fuzzy caterpillar, there could be some yellow liquid on your hand. This yellow liquid is a defence mechanism of the caterpillar and not pee, so you don’t have to be grossed out or get worried.

This liquid is harmless and doesn’t irritate your skin either. Still, you should wash your hands thoroughly after holding these caterpillars as this liquid can be dangerous if accidentally ingested.

What Do Fuzzy Black Caterpillars Turn Into?

If it’s a giant leopard moth caterpillar, then unsurprisingly it’ll grow into a giant leopard moth. These moths have a wingspan of three inches and black circles on their white wings. It has a bluish-black tone on certain areas as well as some orange portions.

If the caterpillar is a woolly bear, then it’ll become the Isabella tiger moth which is a rare moth. It is caramel or rust-coloured, sometimes cream or yellow coloured in appearance.

What Other Caterpillars are Fuzzy in Appearance?

When it comes to caterpillars, a lot of them are fuzzy in appearance.

You may now know that most black and fuzzy caterpillars are not poisonous but do you have further questions about them? Then check these out:

Most black caterpillars are not poisonous. If they have long hairs or barbs then they may cause some skin irritation but it’s highly unlikely that they are poisonous nor can cause longterm harm.

There is a huge range of fuzzy caterpillars, most are unlikely to be poisonous but this is not the cause for all caterpillars. If you do not know what you’re handling then avoid touching it.

Are Black and Orange Caterpillars Poisonous?

Most black and orange look menacing but it’s all in their appearance. They cannot cause you harm and are not known to be poisonous.

How Big Can Fuzzy Black Caterpillars Get?

Fuzzy black caterpillars are generally bigger than your average caterpillar. Their thin black spines make them look even larger. Three inches is the maximum length these fuzzy caterpillars can grow to.

Black fuzzy caterpillars, even if they look similar to many poisonous insects, aren’t poisonous or dangerous at all. You can find them wandering around your yard eating various plants until they pupate into a giant leopard moth or Isabella Tiger moth, depending on the type of caterpillar.