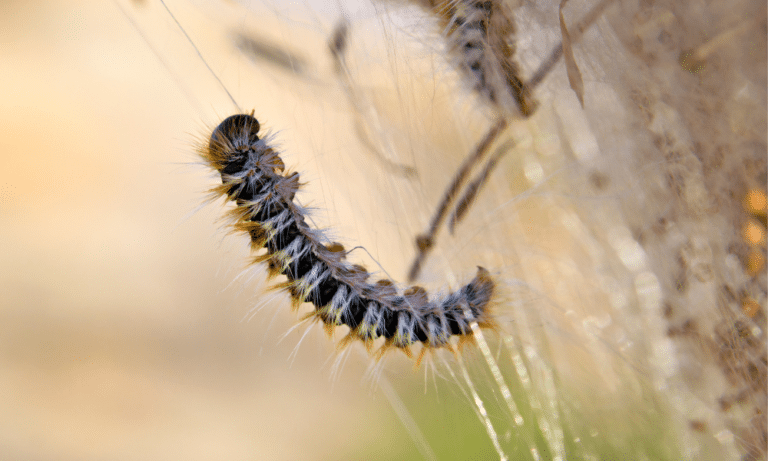 Caterpillars don’t look like the average bug, and they are very similar in appearance to that of a worm, so you may wonder if caterpillars belong to the phylum Annelida because of their appearance or phylum Arthropoda. So, are caterpillars arthropods or annelids?

Despite their similar appearance to worms, which belong to the phylum Annelida, caterpillars are arthropods.

They’re not exactly fully-developed bugs. They’re the larval stage of butterflies and moths, which are insects. Insects belong to the class Insecta and are arthropods. Thus, making caterpillars arthropods.

Insects are animals that have a segmented body and an exoskeleton, and they’re also arthropods. But the two don’t necessarily go hand-in-hand. An animal can be an arthropod without being an insect. Crabs and spiders are arthropods but aren’t insects.

This may be a little confusing, but there are several physical characteristics among insects that help you identify which bug is an insect or not.

An insect’s body is segmented into three portions, a thorax, a head, and an abdomen. They have a pair of antennae to help them sense edible food and six segmented legs, three on one side and three on the other side.

Caterpillars are the larval form of butterflies and moths, and just like their parents, caterpillars are considered insects. Due to several anatomical characteristics that caterpillars have, such as their legs on both sides and an exoskeleton, they can easily be identified as insects.

The exoskeleton, though, is squishy and soft, but it’s still an exoskeleton. The squishy exoskeleton isn’t the only unique trait that caterpillars have, as they also have ten stumpy prolegs on both sides with hooks that they use like hands. With the help of these prolegs, they hang onto branches or other things, and it also helps them in mobility.

Is a Butterfly an Arthropod?

There are certain characteristics that arthropods have that can help you identify that butterflies are arthropods:

Arthropods have a segmented body of three or two portions. Some have a head, thorax, and abdomen, and in some arthropods, the head and thorax are conjoined.

The head has the eyes, brain, and antennae. The thorax has certain important appendages, and the abdomen will have the digestive system and reproductive organs. When identifying an adult butterfly, you can clearly notice its segmented body.

The head has visible antennae and large eyes. The head is round and easily noticeable. The proboscis on the head is clearly visible as well. It’s their tube-like mouth through which they drink nectar with.

The thorax and abdomen are easily differentiated and noticeable in moths and butterflies. The thorax has legs on both sides, and the abdomen has the reproductive and digestive systems.

In arthropods, exoskeletons are obvious. The exoskeleton is a hard layer that protects the insides of insects. These are present only in invertebrates. They have the same function as skeletons that mammals have.

Butterflies and moths have an exoskeleton that is covered by hair and fur. The furry layer helps to keep them warm.

Butterflies have a very visibly obvious set of antennae. Some types of moths even have antennae that resemble a feather. Antennae are a necessary appendage that helps arthropods navigate and sense their surroundings for heat, humidity, and food.

When an arthropod grows in size, its exoskeleton doesn’t grow and is needed to be shed. Hence the arthropod sheds its old exoskeleton and then later forms a new exoskeleton. Caterpillars molt to turn into a butterfly or a moth.

Is a Moth an Arthropod?

Similar to a butterfly, a moth is an arthropod as well. Just like butterflies, moths have a segmented body and segmented legs. Their body is covered by a hard exoskeleton which is covered with fur and hair.

Like butterflies, moths have antennae that help them to sense their environment. Some moths are very fluffy and can even have feather-like antennae.

How Do Caterpillars Turn Into Butterflies?

Caterpillars go through a process called molting to turn into a butterfly or a moth. To molt, caterpillars make a cocoon. Their salivary glands produce liquid silk.

This silk is used to make the cocoon. This is done by the caterpillar drooling the liquid silk from its opening, which is called a spinneret.

The silk hardens when exposed to air. The caterpillar wraps this thread around itself until a cocoon is formed. The caterpillar then becomes a pupa. The pupa hangs, and now the exoskeleton is split open, revealing a chrysalis. This is where the transformation from a caterpillar to a butterfly happens.

Each species has a varying time duration of how long it takes for the pupa stage to pass. Some take a few days and even a year. The final stage occurs when the chrysalis casing is opened, and the butterfly emerges.

Caterpillars are peculiar creatures. They look like worms but are in no way close to them. It’s a common misconception that people may think caterpillars aren’t arthropods, but actually, they are.

Caterpillars, even if they don’t look like most arthropods, are arthropods due to the same characteristics as other arthropods and because caterpillars grow into butterflies and moths; both of which are also arthropods.