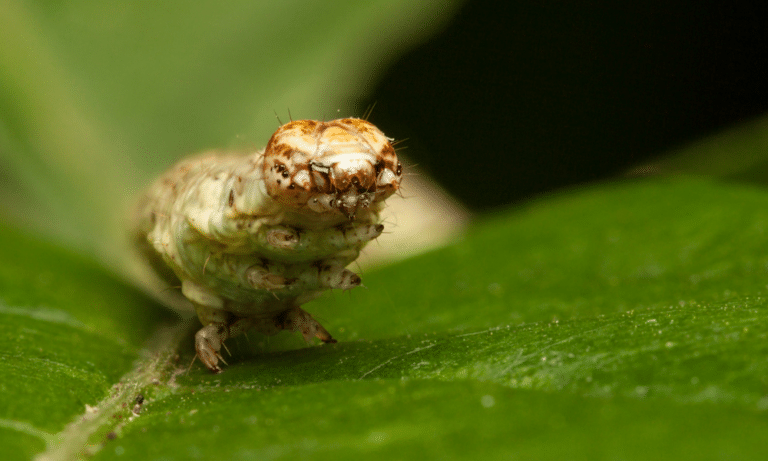 When you see a caterpillar, its head is always visible, but you can barely see its eyes. Some insects see things we can’t see, or they barely see anything. Which category do caterpillars fall into? Are caterpillars blind or do they have good eyesight?

No, caterpillars are not blind, though their eyesight is minimal, so they mostly depend on their antennae to sense their surroundings.

Caterpillars may not be blind, but they nearly are. Their simple ocelli eyes can only decipher light and dark. They’re unable to see a clear picture of what’s in front of them. Their eyes consist of pigments and photoreceptors, which are light-sensitive cells.

Commonly caterpillars have six ocelli eyes on either side of the head. These ocelli eyes are in a semi-circle formation beside the mandibles (the caterpillar’s jaw).

Do Caterpillars Have Eyes?

Yes, caterpillars have eyes. Caterpillars have twelve eyes in total. They’re on either side of their head. These six eyes on each side are simple ocelli eyes, and they can’t see the same as us humans. They can only differentiate light from dark and dark from light.

When a caterpillar becomes a butterfly, the ocelli eyes change to larger compound eyes. This may sound like an upgrade, but these compound eyes are just as bad as their previous eyes.

If you look at these eyes under a microscope, you will see that these eyes are composed of countless tiny hexagonal six-sided lenses.

Each of these lenses is positioned on top of a tube. This tube is long and is called an ommatidium. The ommatidia have special cells specially designed to catch any light from the surroundings.

These special cells are known as photoreceptors. When light reflects off an object, only then can an insect see that object. The more light that is reflected, the easier it is for the insect to make a clear picture of it.

Where are the Eyes of a Caterpillar?

Caterpillar eyes are hard to spot, especially if the whole head of the caterpillar is black. It’s easier to find them if the caterpillar’s head is of any other colour. The eyes are located beside the mandibles on either of the sides. There are six eyes on both sides and twelve in total.

You would think a caterpillar would have excellent eyesight with so many eyes, but, this is not the case. A caterpillar is almost blind, and the most its eyes can do is tell light apart from the dark.

Caterpillars aren’t alone when it comes to bad eyesight. Almost every insect has very bad eyesight and sees everything blurry or pixelated.

Caterpillars, butterflies, and most other insects are said to be blind because if compared to a human, an insect’s eyesight is 100 times worse, making it see everything blurry.

How Many Eyes Do Caterpillars Have?

Most species of caterpillars have 12 eyes in total, with six eyes on both sides of their head. Some species either have 10 eyes in total or even 14 altogether as well.

When it comes to insects, the number of eyes doesn’t do anything to improve their eyesight. Hence, even if a caterpillar has 14 eyes, it will see everything very blurry.

How Do Caterpillars See?

When light reflects off an object in front of the simple eyes (ocelli) of caterpillars, they can distinguish it through the light. As mentioned earlier, caterpillars cannot see properly, and darkness and light is the only thing they can make out with their tiny eyes.

As caterpillars always keep their head down, eating whatever they find in a slow and steady way, they don’t really have to see in front of them much.

Another reason why caterpillars aren’t dependent on their sight is due to the fact that their antennae do most of the job of sensing and feeling their surroundings.

The sensory information a caterpillar’s antennae provides helps them in a number of ways. For example, the antennae help them figure out where they are going, and it also tells them about any edible food that may be in front of them.

How Do Butterflies See?

These lenses are better at picking light on objects than the ocelli eyes.

Another unique thing about compound eyes is that they also have photoreceptors. These photoreceptors can catch ultraviolet light that almost every other creature, including you, cannot see.

Several flowers even have an ultraviolet pattern that a butterfly can see from afar. The patterns act like a landing zone for pollinating insects.

How Do Caterpillars Touch, Smell, and Taste?

Having minimal eyesight isn’t much of a problem for caterpillars as with antennae, they can sense their environment for dangers, food, and navigating.

The fur on a caterpillar helps it with physically touching nearby things. These fur and hair are called tactile setae and gives a caterpillar a sense of touch.

A caterpillar has small mouth parts called maxillae under the mandibles, which are its jaws. The maxillae have taste cells and notify the caterpillar which food is edible and which isn’t.

A caterpillar has several eyes, even though all these eyes don’t really fulfil the purpose of sight. They help distinguish light and darkness for a caterpillar. Caterpillars can barely see enough, so we can say that they’re not blind. Their simple eyes, called ocelli can be 10, 12, or even 14 in numbers.

Light helps them to make out what’s in front of them. Caterpillars don’t have to see clearly in order to survive as all their other senses help them more than their eyes, such as their antennae and fur.