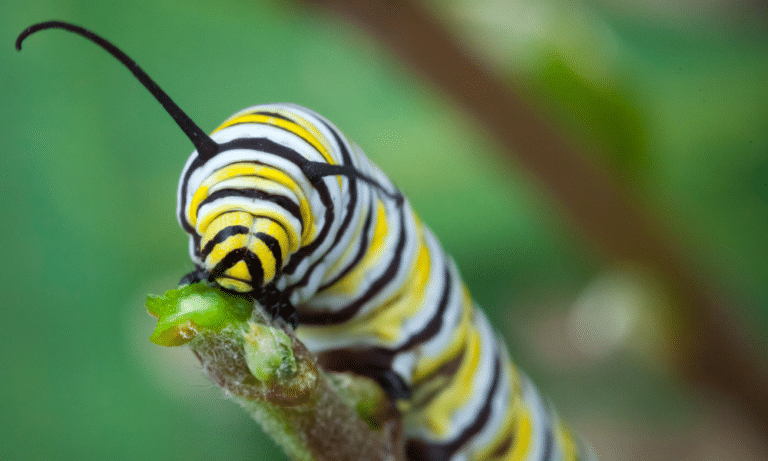 Caterpillars in their larval stage eat most of the time, and eating is basically the only thing they can do until they become a chrysalis to form into a butterfly. Caterpillars eat almost anything, and some species even are cannibals and may eat their own kind. But, are monarch caterpillars cannibalistic?

Yes, monarch caterpillars can be cannibalistic. Sometimes a caterpillar may eat its eggs, another caterpillar, a chrysalis or pupa, even if food is plenty, due to the taste of the caterpillar being the same as the plant it eats.

Do Butterflies Cannibalise Each Other?

Butterflies might be beautiful creatures but some species of butterflies are seen to perform acts of cannibalism. These butterflies don’t exactly eat other butterflies, but they scratch caterpillars to drink their juices.

Milkweed caterpillars feast on toxic plants because they need the toxic chemicals to reside in them, so they become undesirable to their predators.

This habit is often common in many insects for self-defence against predators. When these caterpillars become butterflies, they get this toxic ability back and show that they’re poisonous because of their bright, vibrant colours.

Another reason why butterflies would eat a caterpillar is to use the toxic substances to make mating pheromones. Only male butterflies do this to attract females. They usually can get these toxins from most plants, but butterflies in North Sulawesi, Indonesia, have actually started eating caterpillars and have developed a taste for them.

Which Caterpillars are Cannibals?

There are a lot of other species of caterpillars that resort to cannibalism due to scarcity of food or if they can’t find any food.

Because of eating and attacking their own kind so readily, a clouded sulphur caterpillar is raised separately from its siblings, with one egg per plant stem, so they avoid attacking eating each other.

When these caterpillars are young, they are gregarious. This means that they eat very close to each other and eat leaves together quickly in a group. This results often in cannibalism as the caterpillars start eating each other while eating the life.

Why are Some Caterpillars Cannibals?

There are a couple of reasons why caterpillars go on a cannibalistic approach:

One reason, as mentioned earlier, is when a caterpillar tastes exactly like a plant that another caterpillar eats, this would cause it to eat that caterpillar. A caterpillar, in a way, is a combination of a mature egg and a host plant.

Similarly, a caterpillar may eat a toxic caterpillar to consume its toxins, so the self-defence mechanism is it’s own.

Caterpillars may resort to cannibalism also when there’s no food nearby, or food has run out, or the place the caterpillar was hatched had run out of food like birds, and other insects have already eaten it. In such instances, a caterpillar may become a cannibal.

Caterpillars eat a lot to become a chrysalis to form into a butterfly. They need enough food to store that helps them during their time in a chrysalis.

If they don’t get the required food they need, they will turn to other means of food, such as cannibalism. Caterpillars and butterflies alike can be cannibalistic for many reasons.