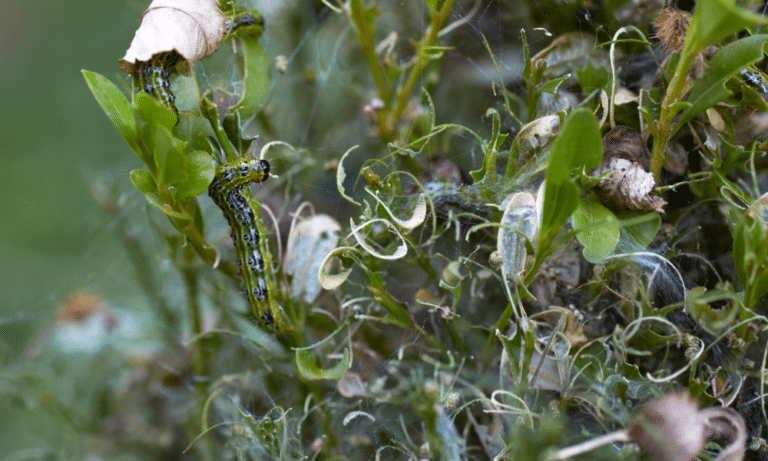 Both box tree caterpillars and moths like to eat the Buxus plants; hence, invading other plants is less likely.

Sometimes, you may have plants belonging to the Buxus family, like the Japanese spurge, which attracts box tree caterpillars. You need to be careful around such plants and ensure you look out for these caterpillars.

Box tree caterpillars love to consume box plants. You can recognize these caterpillars through their blackheads and bright green colours. The insects also keep themselves covered with webbing to hide from predators.

Usually, you may not recognize the caterpillar, but you can look at the damage and tell about the insect that has been eating your plants lately.

Like all caterpillars, the box tree one also begins with larvae. However, it is so tiny that you cannot spot it with your naked eye. The newly hatched caterpillars are yellowish-green in colour and take almost four weeks to reach adulthood.

One of the challenges of dealing with box tree caterpillars is their ability to camouflage their presence. By wrapping themselves in webbing, the caterpillars disguise themselves as foliage. This protects the babies, but it also keeps them safe from predators.

When it comes to the actual damage entailed by the caterpillars, it is only minor if they are young. However, the older caterpillars will consume a lot and cause greater damage to the box plant.

Adult caterpillars can cause grave damage, leaving the box plant with a skeleton appearance. You can recognize that you have box tree caterpillar damage as there are spider mites that get left behind.

However, box plants are able to recover from extensive caterpillar damage as they have healing properties. But the box plant can die if the caterpillars attack the plant’s stem or attack it repeatedly.

Caterpillars may seem harmless to us humans. However, they can create trouble too. Box caterpillars can be toxic to humans. Therefore, it is always good to take precautions when dealing with caterpillars in your garden.

How To Get Rid of Box Tree Caterpillars

The main reason why box tree caterpillars are so prevalent is that they have no natural predators. These insects are native to south-east Asia, and they are not appealing to larger insects and birds in northern Europe.

It, therefore, becomes a problem for gardeners to get rid of box tree caterpillars. But, there are a few ways you can tackle this problem:

One of the ways you can remove box tree caterpillars from your garden is by hand. However, this method will only be effective if you have a few caterpillars. On the other hand, a full-blown infestation cannot be handled by just manual removal.

It is important to take a few precautions if you wish to use this method. Although box tree caterpillars may appear harmless, they can be toxic to humans.

You can get your hands on some pheromone traps to deal with the box tree moths. The traps release pheromones which attract male moths to them. You may wonder if the trap is effective at all if it only attracts the male moths. The trap by attracting male moths will disrupt the breeding cycle.

But, the traps need to be replaced often, and it is not possible to attract all the male moths in the area. So, there can still be some moths that will settle in your garden.

An effective way to deal with box caterpillars or moths, and other insects is to use nematodes. This powder is known for tackling many different insects. You can mix the powder which a little water and spray it on the plant leaves where the caterpillars settle.

Wherever you get this from, it is important to ensure that you follow the instructions on the packaging to follow any required specifications.

What better way to deal with insects than the natural approach? You can use the bacterium Bacillus Thurigiensis as a pesticide against the box tree moth. Other than this, the bacterium will also work to kill any other insect that may harm your plants.

The bacterium contains proteins that attack the digestive system of the larva, paralyzing them, so they are not able to eat. Hence, the larva eventually dies. You can mix the bacterium powder in some water and spray it on the boxwood plants to keep the caterpillars away.

There are a few ways you can tackle the box tree caterpillars either by manual removal, using pheromone traps, nematodes or bacterium.