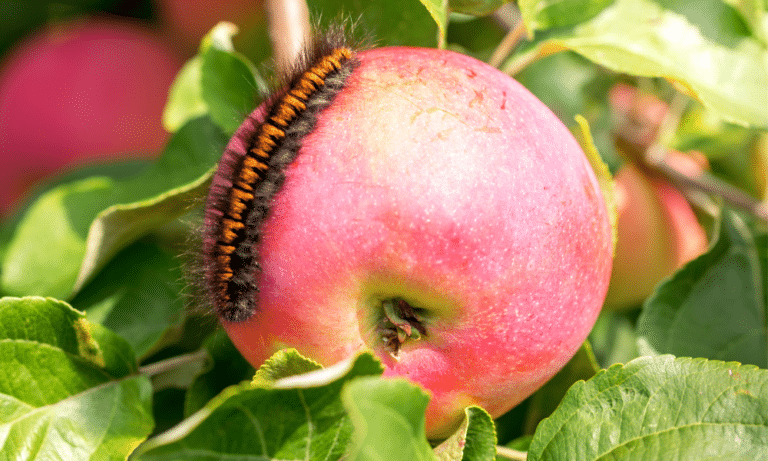 Caterpillars have a very diverse diet. They eat a lot of things to store in their bodies which helps them while they’re in their pupa stage, where they’re inside a cocoon and undergo the process of becoming a butterfly. But let’s focus on apples: Do caterpillars eat apples or not?

A caterpillar loves apple trees, but they’re more interested in their leaves and are less likely to be found eating apples.

The holes in your apples you’re blaming the caterpillars for are probably caused by maggots or moths. Caterpillars have a very similar appearance to worms which also eat apples.

Having such a likeness makes people think that the tiny holes are caused by the caterpillars who are actually busily munching on the leaves of the apple tree instead.

Caterpillars have a big diet for good reasons, as everything they eat helps in their pupa stage, where they can’t move and are in a cocoon or chrysalis.

Tent caterpillars are divided into three types that are Eastern, Western, and forest caterpillars. This eating habit occurs during the early summer. They eat apple tree leaves in the summer so the tree can’t get enough time to grow more leaves and survive.

They’re named tent caterpillars because they make a silky web-like structure around the branches where they were eating from. However, only eastern and western tent caterpillars are seen making this sort of web.

Because they eat in a group, they can finish off branches quicker than the tent caterpillars, and as they feed in late summers or fall, their damage to the trees is even worse as most of the branches are consumed, and the tree doesn’t even have time to grow more of them.

What Other Foods Do Caterpillars Eat?

Herbs, wild vegetation, and even dead leaves are on the menu for caterpillars. A lot of different types of caterpillars eat fruits and vegetables.

Most caterpillars love munching on cob corn, lettuce, cabbage, pears, bananas, and all other types of fruits and vegetables. Caterpillars basically eat anything that they get their mandibles near to.

What Other Things Do Caterpillars Eat?

When you have a lot of caterpillars in your garden that specifically eat flowers, your plants will have a hard time growing them, as most caterpillars eat the flower buds before they even get the chance to be fully born.

A lot of different species of caterpillars also feed on grass and will enjoy grass sprouts and other types of grass. They will also eat the stem and seeds of grass, which can make growing grass a little difficult if you want a nice lawn.

Some types of caterpillars are omnivores and will consume other animals as well that are smaller than them, like certain types of tiny insects like ants. Large blue butterfly caterpillars usually eat flower buds, but they have a backup plan if flowers aren’t available or if they’re at a place where there are no flower buds.

When dropped from their area where there were flowers or if flowers have run out, a blue butterfly caterpillar will emit a scent that will bring ants near to them. The ants, due to this scent, will bring these caterpillars to their ant hole, where the caterpillar can eat the ant grubs.

Caterpillars have a diverse diet ranging from leaves, flowers, twigs, fruits, vegetables, animal poop, dead animals, and even other caterpillars. Caterpillars eat many fruits, but the holes you saw on the apples in your gardens are probably something else because though caterpillars eat most types of fruits, they like apple tree leaves more than the apples on them.