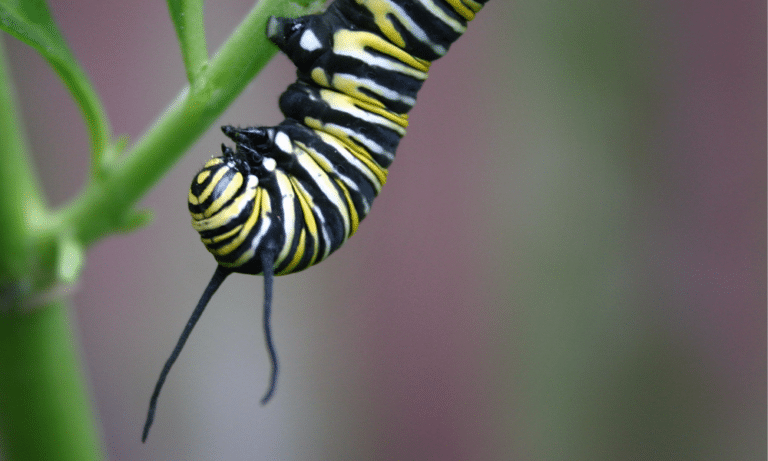 Insects generally don’t have visible ears like us. Some of them are so tiny that you can hardly spot any of their limbs or body parts. If you happen to see a caterpillar in your yard, it’ll react to loud noises, and if you make a loud sound near it, it will curl into a ball. So, do caterpillars have ears then?

No, caterpillars do not have visible physical ears. Caterpillars hear vibrations and sense their surroundings with their antennae.

Caterpillars can hear, but they do not have ears. They feel (and therefore hear) vibrations and feel and sense their environment with the help of their tiny antennae.

They’re largely dependent on their antennae not only for their hearing but also for their vision as their several eyes hardly can see anything.

If you accidentally scare a caterpillar by a loud noise, it curls up or freezes because its antennae are sensitive to surrounding vibrations.

A caterpillar’s antennae are its ears, eyes, and nose. It can hear vibrations in the surrounding environment through its antennae. It can smell its surroundings and sense nearby objects and food. The antennae help them balance, and it tells the caterpillar where it is going as the eyes of a caterpillar are almost blind.

If there’s a loud sound nearby and you scream at a caterpillar or nearby a caterpillar then the caterpillar will curl up in a defensive manoeuvre or stop moving, acting like it’s dead.

This happens because the antennae sense vibrations in their surroundings and notify the caterpillar about the loud noise being a potential threat. This makes the caterpillar perform its defensive actions.

This strategy may not fool you, but predators often leave the caterpillar alone if they think it’s dead.

Do Caterpillars Have Eardrums?

A caterpillar doesn’t have ears or eardrums. As mentioned earlier, a caterpillar can only hear with its antennae and the hair on its body and head.

This hearing is also not exactly or even remotely similar to our hearing or any other animal’s hearing, as caterpillars only can sense vibrations from their environment.

Some moths, however, do have something similar to an ear. These ears are located on the thorax and are membranes rather than ears. These aren’t easily visible, and you can’t really see them on a moth.

In several species of butterflies and moths, the adults have antennae that have motion stability sensors. These help greatly to hear predators or all other sounds and vibrations.

Several types of caterpillars communicate with other caterpillars through their rear ends. As much as this may sound weird, it’s true. They scrape on oar-like structures on the surface of whichever leaf they’re nearby.

This scraping is a warning call to intruders that this branch is taken by the caterpillar on it. According to scientists, this rear-end communication with other caterpillars is evolved through its crawling behaviours.

Caterpillars make their shelters with silk that helps them to protect their territory and ward off any unwanted intruders. It helps a little with avoiding predators as well. Caterpillars have two strategies for communicating with an unwanted intruder, one way is aggressive, and the other is a much calmer approach.

Do Caterpillars Make a Sound?

Caterpillars are noisy critters and make loud chomping sounds whenever they are feeding. Some species produce many other diverse sounds other than the chomping sound.

For example, the Nessus sphinx hawk moth caterpillar makes a faint crying sound that resembles a static and spitting sound. It’s a mix of both of these sounds.

Brownish-red caterpillars seem to make a sound similar to a roaring of a jet engine or a tea kettle whistle. Some caterpillars also make a cute squeaking sound that they make by blowing air from the holes in their bodies.

These caterpillars who produce a squeaking sound, do this to scare off birds from eating them.

These sounds rather coming from their mouths are instead emitted from their guts. When they inhale air, a hissing sound occurs. When air is exhaled, a scratching sound is made.

Many insects that don’t fly, use other ways to escape or ward off predators from their territories. Similarly, caterpillars can make certain sounds that can scare off their predators, mainly birds.

Like all other insects, caterpillars are highly dependent on their antennae for most of their senses. As their eyes are unable to see most things clearly and they don’t have ears, they depend on their antennae to hear their surroundings in the form of vibrational signals.