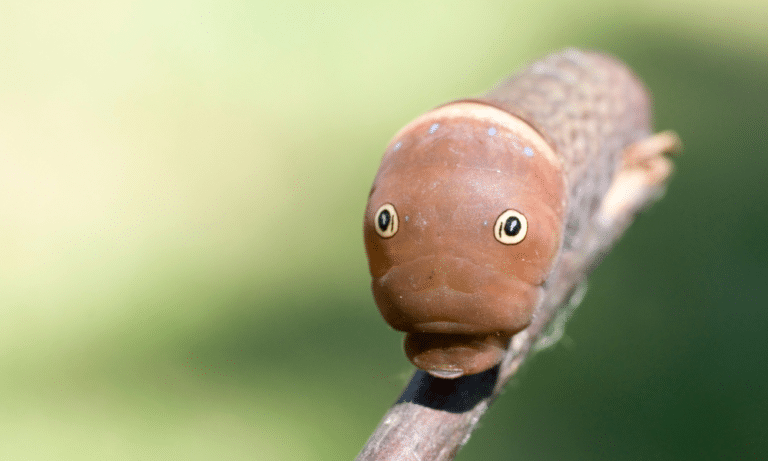 Caterpillars seem to know where they’re going, but you can’t spot their eyes no matter how much you stare at one. The most visible thing on its head is its mandibles. So, how does a caterpillar see if its eyes are so tiny that you can’t even notice them? In fact, do caterpillars have eyes at all?

Most caterpillars have 6 eyes on each side of their heads, making 12 eyes in total. However, some have 5 or 7. These light-sensitive eyes are called stemmata or ocelli.

The majority of caterpillars have 12 eyes in total, with 6 on each side of their heads but this can vary with some having between 5 and 7 eyes.

Their eyes are light-sensitive, and unlike most insects that have compound eyes, caterpillars have simple eyes.

With so many eyes, you’d think caterpillars would have excellent vision. However, it’s the opposite! Caterpillars have poor vision and are almost blind as they see everything blurry. Their eyes are called stemmata or ocelli and help the caterpillar distinguish food from everything else as well as between light and dark.

Caterpillars are not blind. They barely can see but this doesn’t mean that they are blind. Their cluster of eyes is called ommatidia. Each eye of a caterpillar is a simple eye called ocelli or stemmata.

They can have 5, 6, or 7 eyes on each side of their heads. These eyes are under the antennae and above the mandibles of the caterpillar. No matter if they have 12 or 15 eyes in total, they can’t see clearly, and their vision can only decipher dark from light.

They can also get a little idea if an intruder is in front of them and their eyes help them distinguish whenever daytime and nighttime start and end.

The eyes of a caterpillar improve, however, when a caterpillar becomes a butterfly. This improvement is still very minor so their eyesight doesn’t become fully clear.

Butterflies and moths can also gain the advantage of being able to see ultraviolet light. Seeing ultraviolet light is not useful for a caterpillar – they only get this ability when becoming a butterfly.

Seeing ultraviolet light is necessary for a butterfly as it helps it to see flowers that need to be pollinated. Caterpillars just simply crawl and wiggle to move around, and therefore, they don’t need any special eyes with extreme vision or sensitive photoreceptors to detect different types of light.

What Can Caterpillars See?

Caterpillars can see, but they’re almost blind as their vision is very blurry and can’t really decipher much. It would be like looking through a sheet of tracing paper.

They can only distinguish when it is daytime or nighttime or if any weather conditions have changed. Caterpillars don’t really have to see much in order to know where they’re going or what they are eating because the antennae of caterpillars make up for their extremely poor vision.

Their antennae provide them with all the necessary sensory information they need. They can feel and sense vibrations from their surroundings to help them detect if a threat is nearby or where they’re going.

They can sense sounds with the help of their antennae and can sense and smell food and know if it’s edible or not.

How Many Antennae Do Caterpillars Have?

What Are Fake Eyes?

Some caterpillars have large eyespots that aren’t their actual eyes. Their purpose is to scare off predators. You probably have seen one of these caterpillars and might’ve been confused about why it has such big eyes, but they’re actually a pattern on their skin that looks like eyes.

They’re an adaptation that has evolved to make the caterpillar look way more threatening to its predators.

All the caterpillars with fake eyes aren’t pests and are not poisonous, so don’t worry if you come across one, they’re harmless, and that is basically the reason why they need these eyes. You may find these eyes to be noticeably fake, but to a hungry bird or larger predator, they would actually look like large threatening eyes.

Any predator such as a bird, mouse, lizard or big spider will avoid this caterpillar as it looks somewhat like a snake with those big threatening eyes, even though the spicebush swallowtail caterpillar is completely harmless.

Caterpillars have simple eyes called stemmata which are pretty much blind when it comes to vision and can only differentiate between night and day. They’re in a circular cluster formation.

Caterpillar eyes are so poor in vision that they depend entirely on their antennae for sensing their surroundings. Their antennae act as their sight, hearing and sense of smell.

Some species of caterpillars have fake eyes that they use to scare off predators.