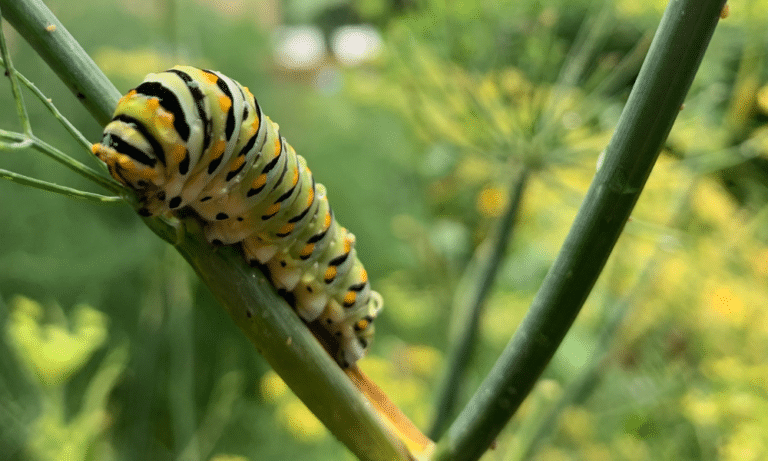 If you’re thinking of making a caterpillar habitat to see them transform into butterflies and moths, you must be wondering what environment or temperature the habitat should be placed in. One of the first questions you need to ask yourself is: Do caterpillars need sunlight or can they survive in the dark?

Caterpillars do not need sunlight. Caterpillars can dry out in the sun so avoid keeping the caterpillars under direct sunlight or if they’re on a plant, ensure no excess sunlight reaches there.

Caterpillars are fragile little creatures and require care in captivity. Move the plant, or in case it can’t be moved, place something over it so only partial sunlight can reach the caterpillars.

If you have a dedicated habitat for the caterpillars, then place it where there is only a little sunlight.

Do Caterpillars Come Out in the Sun?

Caterpillars can dry up in direct sunlight, so they avoid it and don’t come out when the sun is too bright. Caterpillars, though, aren’t traditional pets, but people like building up a habitat as they can be interesting to watch, especially when they’re becoming a butterfly.

It’s exciting to see a caterpillar bloom into a butterfly. Like all other pets, caterpillars require care as well, and you have to care for certain things so the caterpillar doesn’t die.

Caterpillars are sensitive, and direct bright sunlight can dry them out, so it’s best to avoid it by placing the habitat somewhere sunlight isn’t too bright.

If the caterpillars are in your yard, then you can move the plant somewhere where sunlight doesn’t directly reach. If the plant can’t be moved, then, as mentioned earlier, you can use anything to cover it in a way so only partially sunlight can pass.

Do Caterpillars Come Out at Night?

Most species of caterpillars are herbivores and mainly come out at night more than a day because, during nighttime, their predators are minimum. Hence, the chances of falling prey to their several predators like birds and most types of rodents and bigger insects are very low.

Several types of insect larvae mainly come out at night time. If you go out in your yard with a torch, you can easily spot several caterpillars, particularly moth caterpillars.

If you have a separate habitat for some caterpillars, you’ll notice that they mostly get active at night. Sometimes, caterpillars hide during the day and depend upon night for their scavenging time.

What Do Caterpillars Do in the Daytime?

Usually, caterpillars are easily seen during the day, but they’re simply just relaxing in the daytime and mainly during the night when they get very active.

If they come across something to eat during the day, then they will eat as a caterpillar has to eat a lot of food to store it in when it becomes a chrysalis to form into a butterfly. They will eat anything they come across but only at night time is when they actually put effort into finding food.

Can You Take Care of a Caterpillar Indoors?

Caterpillars may be odd pets, but you can keep some in a habitat comfortable for them to live and grow into a butterfly. You must remember several things to keep the caterpillar healthy so it can complete its stages of becoming a butterfly or moth without dying.

Does a Caterpillar Need Warmth?

While butterflies can easily survive the warm spring and summer heat, winter cold can be very cruel for caterpillars. To survive winters and the breezing cold it brings, caterpillars hibernate to avoid getting frozen by the extremity of the weather.

Caterpillars are sensitive creatures, and if you want them to safely become chrysalis to form into a butterfly, then you must keep in mind several things before taking care of a caterpillar in your yard or in a separate habitat.

There should be water in the habitat but not in a dish, as caterpillars may fall and drown. Instead, simply spray some water on the leaves, and the caterpillar can drink the droplets to stay alive.