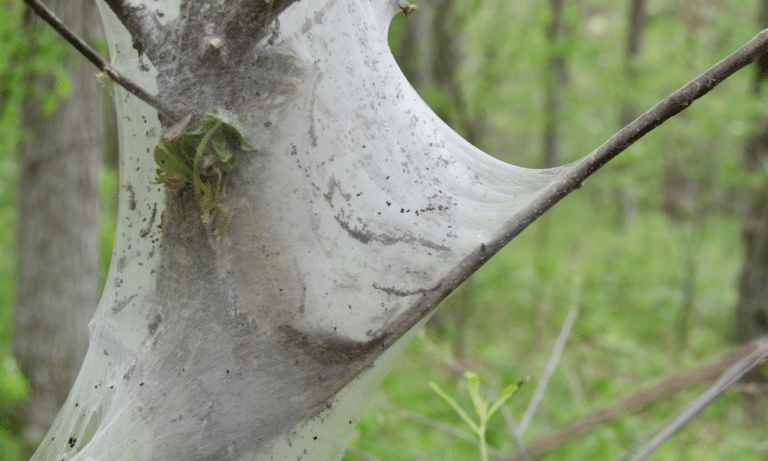 If you’re noticing some creepy-looking webs on your front lawn or on the plants in your backyard, the first thought in your mind comes that it must be spiders. But spiders aren’t the only bugs that can make webs. Have you ever asked yourself: Do caterpillars spin webs too?

Spiders use silken webbing to make their homes so that prey can get caught in them, but caterpillars use their webbing for several purposes.

Caterpillars use silk webbing to not only make habitats but also to make cocoons to metamorphose safely. Not every type of caterpillar spins silk, though, while some of them, such as silkworms, are masters in spinning silk that they’re bred especially for their web-spinning expertise.

What Does It Mean When a Caterpillar is on a Web?

Some types of caterpillars use silk webbing to make a cocoon so they can safely turn into a butterfly without any bug or critter disturbing them.

Other types of caterpillars that can’t make silk take a different approach. They hang upside down when their pupation stage has started. Then, they make a strong exterior covering over themselves called a chrysalis. The chrysalis looks like a leaf.

There is something called a spinneret on a caterpillar’s lower lips through which silk web-making caterpillars draw their silk from. Their salivary glands are modified and designed to make liquidized silk.

The silk made from the salivary glands goes through a tube to the outer part of the spinneret and then immediately dries when it’s exposed to the atmosphere.

When daytime passes, these caterpillars come out during the night to feed.

Some bring tree leaves or other types of food in the tent so they can eat them later. Tent caterpillars are cautious caterpillars and mostly bring in food rather than eat outside, risking themselves from being attacked by a nocturnal predator.

Difference Between a Chrysalis and a Cocoon

During the life of a caterpillar, several stages of moulting take place. These moulting stages help the caterpillar to allow room for more growth. They lose their old skin and show their new skin underneath the shed skin during this process.

After going through these moulting stages, the caterpillar reaches its pupal stage. The pupal stage starts with them moulting the larval stage for the last time. This time, moulting reveals a smooth leaf-like exterior layer called a chrysalis instead of another caterpillar layer.

According to some, this can be the entire pupa or the smooth skin of a pupa. Inside a chrysalis, the caterpillar rearranges itself to form a butterfly.

The main difference is not all caterpillars use a chrysalis to form into a butterfly. Some species of caterpillars turn into butterflies by spinning a silk pad. This pad is attached to a branch just like the chrysalis.

The pad is used as an adhesive, so it easily hangs. They shed their skin and become pupa in it. The caterpillars completely enclose themselves in this silken structure. This type of silk-made structure is called a cocoon.

Spiders aren’t the only insects that can make webbings. Other insects can as well, such as several kinds of caterpillars that can make a silk-made webbing to either protect themselves or make a cocoon to form into a butterfly.

Tent caterpillars can make a silk-made structure in the form of a tent to protect themselves during the day when predators are active, and their tent is a place for them to safely bring in food to eat.

Webworm caterpillars can cover whole branches in their webbing, and some other types of caterpillars are known for web making as well. Some caterpillars make chrysalises, while other silk cocoons. The main difference between the two is cocoons are made of silk.