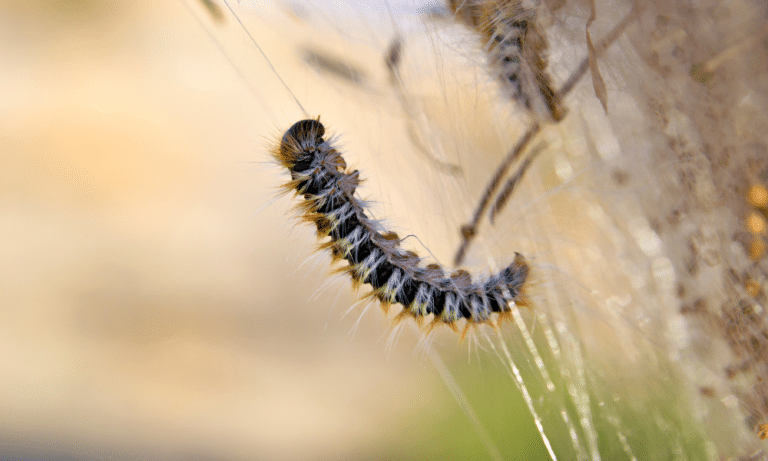 Insects don’t live very long, but the individual stages in their lives are even shorter. Caterpillars are annoying insects that munch their way through countless plants. The butterflies and moths they become are beautiful. So, how long do caterpillars live before they transform?

The life of a caterpillar varies in different species of caterpillars. Some caterpillar species take a few weeks to pupate, while others take several months to pupate into a butterfly.

The lives of caterpillars vary in different species. Some take weeks to grow into a butterfly, others take months.

Caterpillars don’t have very long lives as they’re still in their development phase and aren’t fully developed. They’re the larvae of butterflies that will pupate and grow into adult butterflies, and then their actual life will begin.

A caterpillar’s only purpose is to keep eating until it’s time to pupate. They store food which comes in useful when they’re inside a chrysalis or cocoon.

As they can’t move or do anything inside a cocoon or chrysalis, they depend a lot on their caterpillar phase for gathering enough food, which will come in handy later.

What is the Lifespan of a Caterpillar?

After a baby caterpillar is hatched and leaves its eggshell behind, it can live for anywhere between several weeks and several months before becoming a butterfly, but the time duration varies among different species of caterpillar.

The complete lifespan of a caterpillar is completed when it finally becomes a butterfly.

A caterpillar becomes a butterfly (or moth) by the well-known process of metamorphosis. When a butterfly lays eggs, they hatch, and caterpillars come out, and then the caterpillars keep eating and storing food until they pupate.

During their time in a chrysalis or cocoon, which caterpillars make themselves when they’re ready to pupate, they utilize all the food that they ate when they were caterpillars. After some time, a butterfly emerges from the chrysalis (if it’s a cocoon, a moth will come out).

The time taken for the caterpillar to turn itself into a butterfly can sometimes take a week or two or even several months. Caterpillars are the larval form of butterflies, so they’re basically young butterflies who haven’t formed their wings and turned into butterflies yet.

Do Caterpillars Turn Into Butterflies and Moths?

Normally, it’s several weeks but sometimes it can take 3 or 4 months for the caterpillar to pupate. For example, the painted lady butterfly caterpillar takes four weeks to become ready to pupate and become a butterfly.

The fox moth caterpillar, however, remains a caterpillar for over 11 months, from June to April, to complete its growth.

Why Do Caterpillars Grow so Quick?

Growing rapidly is a caterpillar’s survival strategy because if it grows very fast, it will have more chances of survival by lowing the risk of becoming predator food.

This rapid growth is also necessary because most species of caterpillars are defenceless against predators.

However, there are a couple of species that remain caterpillars for very long periods of time, and in the case of a goat moth caterpillar, it’ll take 5 years to be ready to pupate and turn into a butterfly. It remains in the larval caterpillar form for up to 5 years in a tree trunk!

When Does a Caterpillar Stop Eating?

A caterpillar’s life consists of constant eating as it needs to eat enough food and store enough food that will later come in useful when it’s pupating and will be enclosed in a chrysalis or cocoon.

A caterpillar will only pause eating when it’s shedding skin as each time they grow, they reach a certain limit, and then they have to shed their old exterior and grow a new one. During this time, they cannot eat.

Another time when they cannot eat is when they’re ready to pupate and are busy building a chrysalis or cocoon around them to enclose themselves to become a butterfly.

Inside the cocoon or chrysalis, they’re busy rearranging their bodies to become a butterfly so they cannot eat.

Do Caterpillars Change Colour While Growing?

Whenever a caterpillar sheds its skin, the new skin will look different from the older one with a slightly different hue.

When Do Caterpillars Shed Skins?

Caterpillars eat a lot, and they will keep eating a lot until they become adult butterflies. They need to store enough food to pupate. Eating so much food so quickly causes their bodies to grow at surprisingly fast rates, and their body eventually comes to a limit.

Some caterpillars can even double their size in only two-three days. Their skin stretches but eventually can’t stretch or grow anymore.

When they reach this limit, the caterpillar will have to replace its skin and shed the old one for a new one that is bigger than the previous one, so the caterpillars have more room to grow.

A caterpillar is the larval form of butterflies, and its lifespan is one portion of a much longer lifespan of a butterfly. A caterpillar stays a caterpillar for several weeks or sometimes only a few weeks.