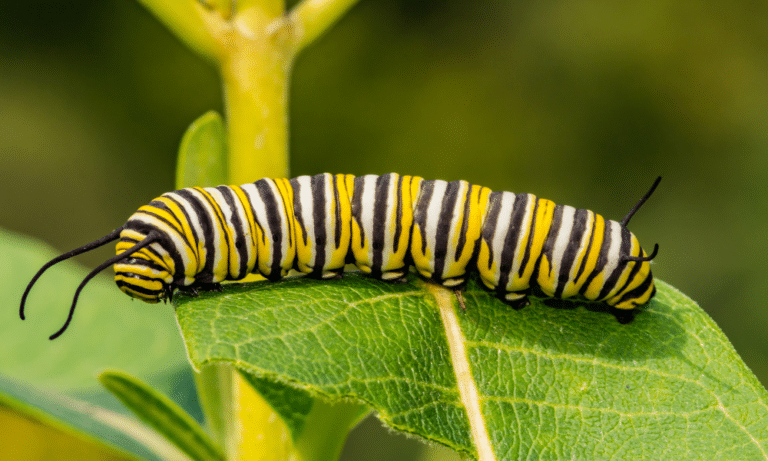 Out of the variety of insects that are found in gardens, one of them that stands out is a caterpillar. Many of us are fascinated by caterpillars, given that they turn into butterflies. But have you considered the basics? How many legs does a caterpillar have, for example?

The prolegs are located all over the caterpillar’s body and are unsegmented. True legs remain as three pairs for all caterpillars, while prolegs can vary in caterpillars ranging from two to five pairs.

Why Do Caterpillars Have Legs?

You may wonder why a caterpillar would have so many legs in the first place. The caterpillar needs so many legs to move around safely. Caterpillars spend most of their time crawling on branches, moving up and down twigs in search of food.

In order to do this carefully and successfully, caterpillars require limbs that will hold on tight to the tree barks so they can have a firm grip and eat their food.

Caterpillars are found low in the food chain, and other than the large, poisonous ones, they are largely unable to fight against predators. It only makes sense for a caterpillar to have so many legs, which allows them to remain pressed against whatever plant they are on.

Caterpillars have a body that needs a lot of support. Therefore, these insects have so many legs; otherwise, caterpillars would be unstable.

Over the years, it is because of evolution that caterpillars have formed so many legs, as they are more helpful than others. This only proves that the amount of legs these insects have is important for the survival of these species.

Having more body parts mean a lot more energy goes into maintaining them. Therefore, if not needed, evolution can lead to the loss of a leg or two. This is why caterpillars may have fewer prolegs than others.

How Many Legs Does a Butterfly Have?

When we look at a butterfly, all our attention is usually diverted towards the bright wings rather than the legs. The wings are more colourful and vibrant than the rest of the body. All butterflies have legs, but you may not always spot them as they are tucked under due to their slim body.

Considering it has wings, it may not seem important for a butterfly to have legs. However, the legs help the butterfly in transportation, food and reproduction.

There is a rule about having three pairs of legs when it comes to insects. However, caterpillars do not seem to follow this rule and have countless legs.

The legs of the butterfly are made of six sections that are interconnected. The legs are also able to move at the joints. Butterflies need their legs to attach to surfaces without using too much of their energy. This is great for when the butterflies are resting or need to stop while having nectar from flowers.

All butterflies have six legs, but there is still a group that only use two of their legs as they go about their day-to-day business. The two legs at the front are smaller and remain tucked away. These butterflies are known as Nymphalidae.

It is still unsure as to why these butterflies have two smaller legs at the front. However, the smaller legs are used for signalling and are also used for grooming.

Butterflies need their legs for different reasons. These insects have to set on vegetation and different plants to feed on flowers or just to rest. In addition, just because butterflies have wings does not mean they are all good at flying.

Some species of butterflies are not great fliers. Other than this, butterflies also need their legs for tasting. These insects can taste what they are standing on and then decide to eat it or not.

How Many Feet Does a Caterpillar Have?

Caterpillars spend all their time eating, looking for food. Therefore, it is important for them to eat food close to the surface. The small feet allow them to remain attached to the plant they are on, which aids in camouflage.

When caterpillars enter their pupal stage, the bodies break down into liquid form, and the butterfly is built from that. The caterpillar loses its feet during metamorphosis, which is the process of it turning into a butterfly. The feet no longer exist, and only the true legs stay behind, which the butterfly has.

Caterpillars spend their time eating, looking for food and building their strength for what is about to come, turning into a butterfly. These crawlers have two kinds of legs, prolegs and true legs. The true legs are situated near the head of the caterpillar and are three legs.

For every insect, there is a rule of having three pairs of legs. However, caterpillars break their rule as they have pro legs which can be five more or less depending on the species.

But, the case of the butterfly has three pairs of legs that are situated on either side of its body. Some butterflies are not good fliers, so they need legs for support. In addition, the legs help the butterfly taste food before deciding to eat it.