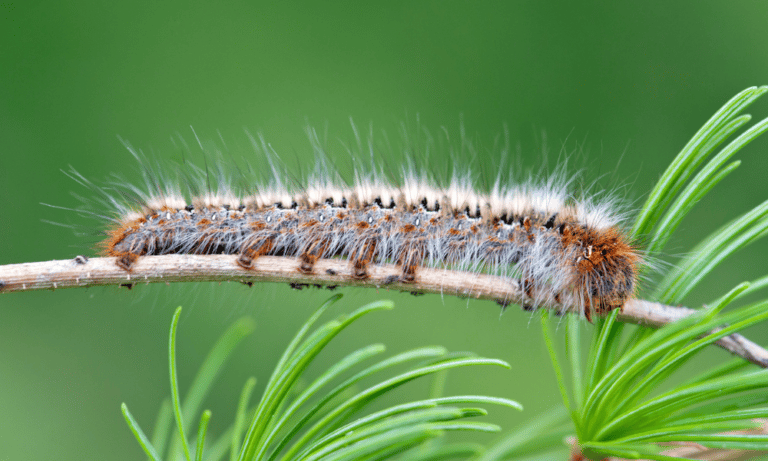 Caterpillars can be dangerous and, even with a touch, you can get stung by a caterpillar. Though most caterpillar species are harmless, several of them have defensive manoeuvres against predators including poison. Here’s how to tell if a caterpillar is poisonous or not:

Caterpillars with spines, quills, lots of hairs and brightly coloured patterns have a high chance of being poisonous.

Most species of caterpillars are harmless. Still, there are some that are very poisonous and coming into contact with them can be very dangerous.

Poisonous caterpillars normally have a lot of hair, spines or quills scattered all over their bodies. Handling a caterpillar like this can cause allergic reactions, itchy rashes or something more serious.

Another easily visible identification of poisonous caterpillars is that they usually have very bright colours. Before you think of touching or holding a caterpillar, it’s best to try and identify whether or not it’s poisonous.

Always Be Cautious
If you don’t know what you’re doing and what you’re touching then always err on the side of caution when handling caterpillars. It’s not always easy to determine if a caterpillar is poisonous or not.

What are the Most Toxic Caterpillars?

Most people think only a bee or wasp can sting you, but caterpillars also have poisonous stingers. They’re called urticating hairs and are quills or tiny thin spines that can get stuck in your skin and break off. This will cause very itchy rashes or any allergic reaction.

Some species have toxins in these hairs, some don’t. The toxins can cause allergic reactions such as blistering, nausea, itching or pain. The following are the most toxic caterpillars that are known to cause similar symptoms:

The stinging rose caterpillar is one of the most brightly coloured toxic caterpillar species. Touching this caterpillar can cause a very itchy rash. You can identify these caterpillars from their very visible clustered brightly yellow coloured spines that come out from its body.

There are spiky horns present on the caterpillar’s rear end, front end and the sides. They either have completely yellow bodies with blue and white stripes going on the middle along their body, or they will have a reddish yellow body with purple or black stripes in the middle.

You can find these caterpillars in Florida, Oklahoma, Texas, and other states. They frequently eat hickory, maples and oaks. They love to munch in rose bushes hence the name rose caterpillar.

The spiny elm caterpillar is a black caterpillar with several tiny white dots on its body with a row of larger bright red or sometimes orange-coloured spots on its back.

Its prolegs are red, and it has several sharp looking black spines on its body. Smaller white quills or bristles surround the larger black spines. This caterpillar turns into a pretty looking butterfly called the Mourning Cloak butterfly.

There are yellow and black stripes going along its segmented body’s length. There are red dots on its body and four batches of white hair on its thorax.

There are long hair pencils called setae that cause allergic reactions or irritation on both parts of the caterpillar’s body. The red colouring at the rear end is are prominent defensive glands and on either side of it are the long black setae. At the opposite end are darkish brown hairs pointing upward.

Saddleback caterpillars look angry with their long spiny stinging thorns. These caterpillars are easy to identify as they have a very bright green patch on the middle parts of their back.

In the middle of the green patch, there’s a big brown spot. On one side of the caterpillar, a pair of white angry-looking fake eyes are used to prevent predators from coming too close.

The spiny oak slug caterpillar is a bright green poisonous caterpillar with spikes all over its body. There are several unique markings on its body, and the caterpillar has an overall flattened look similar to a slug.

These caterpillars have varying colours other than green, their colours can be yellow or orange. There are two orange stripes that go along its body. There are also lime green markings on both sides of the caterpillar.

This species of caterpillar closely resembles a flat leaf. Crowned slug caterpillars have a slightly spherical shape, they’re bright green in colour, and their spikes are on the sides of their bodies, covering all their edges.

The caterpillar has a flat leaf-like shape, but there’s a raised ridge in the middle. Two yellow lines go along the back of the body with red and yellow dots.

Their hollow spines contain very irritating venom, and if you come in contact with them, it’ll cause a burning feeling under your skin.

Several species of caterpillars have dangerous pointy spines that can inject toxins upon contact, but none of the toxins of any species of poisonous caterpillars is known to kill a person. The symptoms mainly include nausea, itching, rashes and allergic reactions.

Caterpillars mostly look harmless, but several species are completely covered with poisonous spines that can cause allergic reactions and rashes.

Caterpillars that have brightly coloured exteriors and sharp spines all over their bodies are usually dangerous, and distance should be kept around them. Though the reactions to their poison may vary, none of their toxins is strong enough to kill someone.