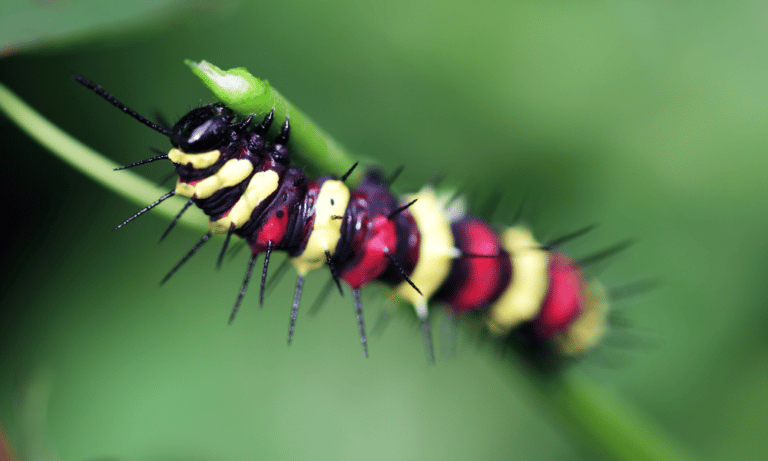 Generally, brightly coloured caterpillars are poisonous, and predators should avoid going near them. Caterpillars that have the same colour as leaves and trees are for camouflage.

Caterpillars come in all pretty colours and shapes. Bright colors usually indicate that the caterpillar is very poisonous, and predators should maintain distance from them.

Caterpillars may also change colour as they grow larger from an earlier stage to a newer one. Or for camouflage related purposes, caterpillars also change colors as most species don’t have enough defensive mechanisms to protect themselves against predators.

They simply hide by changing colours on the surface they’re on, for example, a tree, twig, a leaf or plant.

Do Caterpillars Have the Same Colours as the Butterflies?

No, caterpillars don’t have the same colours as the butterfly or moth that they are going to become. In fact, it’s often hard to determine what a butterfly will look like by looking solely at the caterpillar it currently is.

Where Do Colours in Caterpillars Come From?

Caterpillars often have natural pigmentation meaning their colour will always stay the same wherever and whenever you see them.

However, structural colors meaning the angle from which the caterpillar’s body is being hit by light, will make it seem that its color is changed. It’s a shimmering effect called iridescence.

Caterpillars are colourful insects, but most often, their colourful traits name them easy prey for many predators as they can spot them from afar because of their vibrant colouring.

Therefore, most caterpillars adopt colours similar to the places they’re mostly on, such as leaves, trees, plants, and twigs that helps them blend into their natural habitat where they live and feed.

These colors that give caterpillars excellent camouflage are green, yellow, brown, orange, black, and other dull colours.

Are Yellow and Black Caterpillars Poisonous?

Most green caterpillars are completely harmless, and they often have smooth, soft squishy bodies with no quills or spines coming out.

Though certain species of green caterpillars may also not be poisonous, they have defensive quills and spines to protect themselves from predators. These spines aren’t toxic, but they can hurt a lot if you or any predator comes in direct contact with them.

The European Puss caterpillar is a weird and odd-looking green caterpillar that has two spiked tails and menacing patterns around its head to make it look intimidating and scary.

To identify if it’s threatened, its tails will whip from side to side, and the caterpillar will raise its head, showing its menacing patterns.

Caterpillars are rarely in uniform blue when it comes to their many diverse colour ranges. They don’t even shine bluish on the leaves. However, bluish-green caterpillars do exist.

The caterpillars, when they’re newly hatched, are yellowish-green, but as they grow bigger, they start to change into bluish-green.

Caterpillars come in all peculiar shapes, sizes and colours. Butterflies and moths each have their own odd-looking caterpillars. Caterpillars are colourful insects, and like most other insects in the wild, brightly coloured insects are most often poisonous, and their bright colours are a way of telling predators to back off.

Some bright coloured caterpillars have spines and quills so predators can identify that those caterpillars are poisonous. When trying to get rid of caterpillars, it’s vital that you do so with caution in case the caterpillar you’re dealing with is poisonous.