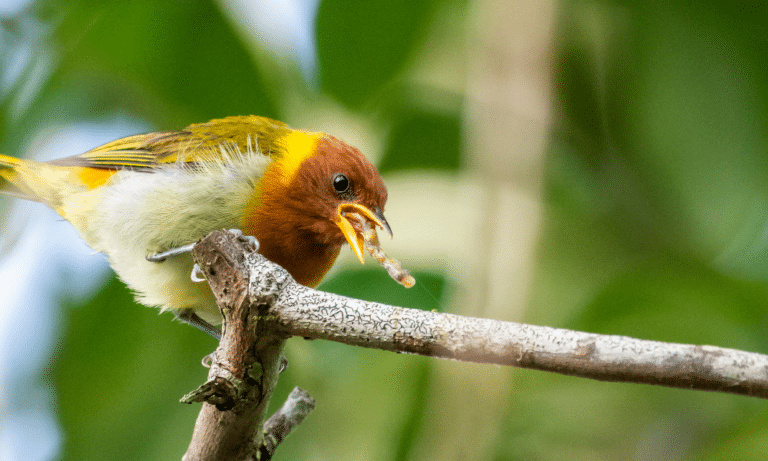 The slow-moving, larval stage of the order Lepidoptera, aka caterpillars, is an easy snack for many animals. So what predators do these slithery soft, defenceless insects become the food of. What eats caterpillars?

Caterpillars are an ideal food for many birds, small mammals like foxes, rodents, insects and humans.

Caterpillars have little to defend themselves with, some may have toxic spikes, but for some predators, there’s nothing stopping them.

Caterpillars can make an easy snack for most of the animals in the wild.

Most birds like tanagers, grosbeaks, cuckoos and insects like yellow jacket wasps and ladybird beetles love to feed on squishy caterpillars and depend greatly on them for food. Rodents, small mammals, amphibians and reptiles will eat caterpillars as well.

Caterpillars are very slow insects, so they’re very easy to catch. They’re an integral part of the food chain.

Birds love to eat caterpillars as they’re easy to eat, effortless to catch because they’re so slow and low on the food chain, they’re rich in protein and are very healthy because they eat a lot throughout their lives.

All this makes them the perfect bird food.

Another reason why so many birds are dependent on caterpillars for their main source of food is that caterpillars often emerge during the nesting period when birds need the most energy.

The bright colours on caterpillars make them very easy to spot from far away. Wrens, owls, woodcocks, warblers, cuckoos, robins and many other species of birds love eating caterpillars.

Some birds, such as the pied flycatcher, are so heavily reliant on caterpillars for their food that they have caused a disastrous reduction in their numbers in the areas where these birds live.

A beetle’s mandibles can tear up a caterpillar no matter how small the beetle is. Even the larvae of some beetles love eating caterpillars.

Ladybirds are famous pest controllers as they love eating caterpillars. They usually feast on aphids but will also eat caterpillars. The soft bodies of caterpillars are easy to munch on for a ladybird. Gardeners use ladybirds especially to wipe out aphids and caterpillar infestation.

Many reptiles depend upon invertebrates for their source of food. Reptiles such as lizards, slow worms and other smaller reptiles like to eat caterpillars and most other invertebrates.

Caterpillars are a good source of energy for reptiles, and they’re healthy for them. Though caterpillars are only available for some part of the year, reptiles aren’t dependent on them for food. Still, if a lizard saw a caterpillar, for example, it wouldn’t miss the opportunity to eat it.

Wasps are carnivorous, and many species of wasp, such as the common wasp, European wasp and yellow jacket wasps, like to eat certain insects to get energy. Caterpillars are squishy, slow, and defenceless, so they make excellent fodder.

A wasp would just swoop in and pick up the caterpillar and start eating it.

Some wasp species, though, aren’t this kind, they don’t just pick caterpillars and eat them, but they will lay their eggs in their bodies and in other invertebrates.

Such type of wasps is called parasitoid wasps, such as ichneumonid wasps. When the wasp eggs hatch, they start eating the caterpillars from the inside.

Some wasps are so smart that they leave the vital organs and eat them at the last, so the caterpillar lives long enough, ensuring its flesh remains fresh.

Yellowjacket wasps also love eating invertebrates, especially caterpillars, as they like to bring caterpillars to their nests to feed their babies. Yellowjackets like to feed on caterpillars in spring and early summer.

Amphibians often include a diet of invertebrates. Frogs, newts, toads, and other amphibians love to eat caterpillars. Though caterpillars are often found higher up in the branches of trees and plants, while amphibians are usually seen in the water, it’s less common for them to encounter caterpillars.

However, caterpillars that have fallen or are near water, an amphibian will immediately eat them up.

Caterpillars can be carnivorous if they haven’t found anything to eat or if food has run out. In even desperate occasions, a caterpillar may even turn cannibalistic and will eat other caterpillars.

Rodents and Other Small Mammals

Caterpillars are a delicacy in some parts of the world, such as Botswana and in East Asian countries like China. Caterpillars are very protein-rich and have a high nutritional value, making them a very healthy snack.

They’re easily accessible and are much less expensive, making them an answer to hunger for most people.

As caterpillars are easy to catch, have lots of energy and are nutritionally beneficial, they can be amazing snacks to munch on for many animals, including most kinds of birds, rodents, smaller mammals like foxes and raccoons, insects like beetles and wasps, reptiles, amphibians and even other caterpillars.

Caterpillars are defenceless and don’t put up a fight, and are very slow, which makes them effortless to eat.