Foxes are famous for being cunning, sly and clever animals. If you happen to find a fox foraging around your garden, you might get worried and fearful of being attacked. However, is this justified? Are foxes dangerous or not?

Foxes aren’t dangerous to humans as they usually run and hide when they see you. They’re only dangerous when they feel threatened or you corner them.

Foxes tend to avoid people, and if you see one in your garden, it’s only out due to a lack of food or habitat loss. Foxes are only aggressive when threatened, injured or rabid (this is very rare, however). Otherwise, they’re scared easily and immediately go away when they see you.

Even if they’re not being aggressive, you should maintain a distance because they can carry infectious parasites and you don’t want to risk winding them up.

Foxes aren’t violent animals and will only attack you if they’re rabid, which is very rare, or when they feel threatened, are injured or captured. Despite their reputation of being clever and sly predators, foxes get easily scared and, most of the time, stay out of your sight.

Foxes are more scared of you than you may be scared of them. They have a fear of humans and will only be seen if it’s absolutely necessary.

For example, if a fox has a shortage of food, the fox will most likely try to salvage any food from bins, chicken coops, and sheds. Another possibility is that a fox may make its den beneath a shed or porch in your garden if its habitat is lost.

A fox is omnivorous, and its diet consists of berries, fruits, insects, birds, and mainly smaller animals, like rodents. If you were concerned if a fox would try to bite you, then don’t worry, as foxes mainly feast on smaller prey.

If you don’t bother a fox, then there’s no need to worry as the fox won’t bother you either. Foxes are also considered the few wild predatory animals that aren’t aggressive.

Yes, foxes are friendly and not a threat to you. They only get aggressive if you make them feel threatened. Otherwise, they’re friendly and calm animals to be around.

Like many animals, foxes can carry several diseases as well that can be transmitted to you if you get bitten by one.

Maintaining a safe distance from a fox is important, so you avoid contracting any diseases it may have. Even if a fox is acting friendly, it’s best to just admire it from a distance as any loud noise or your smell could trigger their aggression.

Foxes are usually seen during nighttime hours, but if you see one during the day, it’s not unusual as foxes can come out during the day as well if they’re really in need of food or want to hunt squirrels, chipmunks and birds that are only out in the daytime.

So, what diseases do foxes carry?

To identify a fox that may be carrying rabies or any other disease, you have to look out for certain behavioural signs of the fox to see if it has rabies.

If the fox you’ve encountered is going through any of these signs, then the fox has a huge possibility of carrying rabies. Maintaining a safe distance is strongly advised around a self-mutilating, aggressive or unusually tamed fox.

Microscopic parasites called Sarcoptes Scabiei mites can cause a very concerning disease called mange. This disease can cause hair loss, either complete or in patches.

This disease can cause unbearable itching that can get so intense to a point that the fox may bite off its own tail to help relieve the intense itching.

When the parasitic disease has been infecting the fox for a considerable period of time, the fox will stop being scared and will be seen during the daytime without running away even if they see you.

A fox that is infected with mange is seen to be fearless and has a very sickly appearance. Mange infected animals look for warm places to help maintain their body temperature.

A fox looks closely similar to a wolf, and that makes people worried if it’s dangerous. However, foxes are calm animals that only attack if they feel threatened.

They’re friendly animals, but you should always maintain a safe distance because no matter how friendly they appear, they’re still wild animals and may bite or scratch you if they feel threatened, which can even cause rabies or any other concerning diseases. 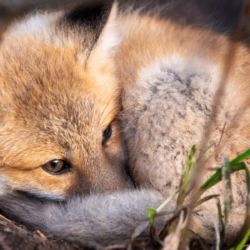 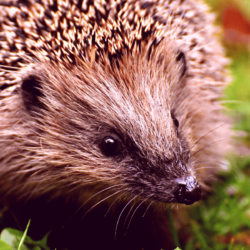