If you’ve seen a fox, you could mistake it for a small dog or a weird looking cat, as foxes have a slight resemblance to dogs but behave a lot like cats. So, are foxes related to dogs or cats? Are foxes dogs, in fact?

Foxes are not dogs. However, foxes belong to the Canidae family, which makes them a canine. Being a canine makes them related to dogs, wolves, coyotes, raccoons, and jackals.

Canids is another name for canines. A slim build, long legs, fluffy tails, and long mouths are common amongst canines.

Foxes check all of these characteristics, and the most notable trait common among canines is their teeth. These characteristics are found in dogs and foxes, which is the clearest indication that foxes are clearly related to domesticated dogs.

Are Foxes and Dogs Related?

Yes, foxes and dogs are related. They share the same build, mouth, ears, legs, and tail. The teeth they both have are exactly the same, and that is the key feature of what canines are known for.

The long canine teeth used for catching and holding down prey, shredding the flesh, and cracking bones is the key characteristic that you can identify a canine as having.

Canines are mainly carnivorous, but some are omnivorous, like foxes and dogs. Like dogs and raccoons, foxes can eat meat but will eat several other kinds of food as well.

As raccoons are canines as well, foxes share their characteristics such as salvaging trash cans for leftovers and going through a chicken coop or a shed for eggs and dairy as they like that as well.

If a fox is in dire need of food, it could sneak into your kitchen and try to find something to eat. They are scavengers, after all.

Is a Fox Just a Wild Dog?

You could say a fox is just a wild variant of a dog as they belong to the same family, canines. Foxes and dogs are more like cousins, they have differences, but the similarities are close enough to make them look related.

Foxes, though, are mainly found in the wild, but they can also be domesticated and tamed.

According to various pieces of evidence, foxes were considered common pets in the Bronze Age. Today, they’re considered mainly wild animals, but some people have been keeping foxes as pets.

How is a Fox Different from a Dog?

Although related, there are a number of ways that dogs and foxes differ from each other:

What mainly differentiates a fox from a dog is its size. Red foxes are considered to be the largest among foxes. They’re 1.3ft long from the shoulder and have an average weight of thirty-one pounds.

This is equivalent to a small or medium dog, but common large dogs are definitely going to tower over them.

Wolves are six times bigger than the average red fox, and even the smallest type of coyote or wild dog would be twice the size and weight of the red fox.

Appearance-wise, red wolves are the closest to red foxes in colouration. They both have almost the same colour. Red foxes are simply a little brighter.

Red wolves have a slightly duller colouration, but their appearance makes them look like a coyote as they’re less fluffy than other wolves and have a more slender appearance than a coyote.

Dogs come in all shapes and sizes, and their appearances vary from each other. Only a few dogs have a similar colouration to foxes, but even those dogs are different enough for you to identify that it’s a dog.

Wolves and wild dogs generally hunt and travel in the form of packs, while foxes have dens where they live.

The den would have one male, two female foxes, and their babies. Wolves and wild dogs move in groups and hunt as a group. They’re social animals and communicate with each other and work together to survive and find food.

Foxes are solitary animals. They live alone most of their lives and will only interact with another fox to raise their offspring.

Dogs are man’s best friend for a reason as they’re incredibly friendly to humans and are amazing pets, they’re domesticated animals, and the ones that are wild are a completely different type of canine.

Foxes like to avoid humans and will run away if you get too close to one. They’re easily scared animals and mostly come out at night when they’re in need of food to avoid interaction.

If you happen to get close to a fox’s den, the female fox will be hostile and may even attack you. However, it’s rare that a fox is dangerous.

Dogs and foxes both can be domesticated. However, foxes are generally considered to be wild animals and mostly live alone. Only a few of them have been kept as pets and are domesticated.

Dogs, though, are mainly kept as pets.

Yes, foxes are related to dogs and canines. Similar to all other canines, foxes have long powerful canine teeth, a long mouth, bushy tail, long legs, and a slender build.

By keeping these characteristics in mind, you can easily identify a fox whenever one comes into your garden. 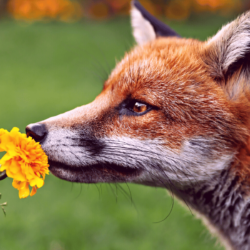 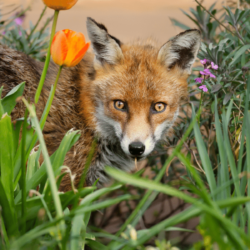