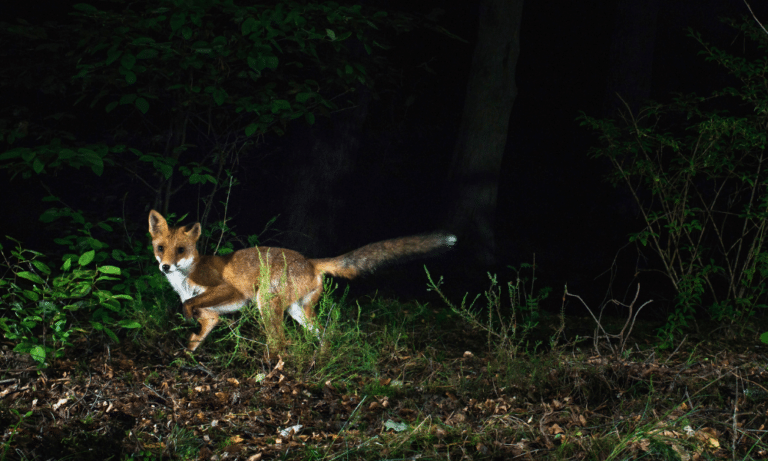 Yes, most species of foxes are nocturnal, they’ll hunt at night and sleep in the daytime, but when it’s absolutely necessary, they can come out during the day too.

Except for Antarctica, foxes are found everywhere. Foxes live in a variety of different biomes and are very adaptable. Foxes are masters in the art of being opportunistic predators. They’re sly, cunning, and clever predators.

Most species of foxes are nocturnal, while some are crepuscular. Crepuscular predators are animals that aren’t strictly nocturnal if they don’t find prey at night. They can come out during dusk and dawn.

Can Foxes Come Out During the Day?

Foxes are mainly nocturnal and will only hunt prey at night because their prey is also usually active at night. However, the night isn’t always the time that a fox may come out. A fox may also come out during the day if it’s in dire need of food or has suffered from habitat loss.

Another reason for a fox to come out in the daytime is that the fox is sick or rabid. An aggressive, rabid fox or a sick fox is very dangerous, so maintain a distance and avoid going near it.

Foxes also come out if the area has fewer humans. As foxes are very scared and are solitary creatures, they usually hunt at night when there are no people around. In an area that is not really populated, in general, the fox there will come out during the day to hunt as well without fear.

The prey isn’t the only reason for a fox to be active only at night hours. Being afraid of humans is another reason. Foxes are way more scared of you than you’ll ever be scared of them.

Different species of foxes hunt different prey which will impact when they are active. For example, Tibetan foxes only hunt during the day and aren’t nocturnal at all. This is mainly because their prey is only active during the day.

Arctic foxes are nocturnal or diurnal. Diurnal means that they are active during the day. If arctic foxes are active both at night and day, then it basically means they’ll come out whenever they’re hungry and will eat whatever is available.

Foxes also get active during the day in the mating season and spend a lot of time outside their dens in search of a mate. They seek shelter under tree roots to rest or any other place and then continue their search for a mate again.

What Do Foxes Do At Night?

Foxes spend their nights looking for prey for themselves and their offspring – if they have any. Hunting at night is much more convenient for foxes. One main reason that they do their hunting at night is to hide from predators.

Like most animals, foxes have predators, and nighttime is the perfect time to hide from them and search for food without worry.

Hunting at night is also better compared to the day because foxes can move much more silently and stealthy at night as the darkness not only hides them from their prey but the silence at night time can also be used as an advantage.

Foxes are excellent stealthy creatures, and their prey can never detect where they are as they’re expert hunters of the night.

Another advantage that foxes possess is their strong senses. Being in the dark doesn’t hinder them from catching their prey, as their eyesight, sense of smell, and hearing are so powerful that they can easily catch their prey in the dark without much effort.

As other nocturnal predators are few at night, foxes don’t have much to worry about. They can easily hunt and bring the food back to their dens without worrying about any other predator stealing the food.

One of the top advantages of hunting at night for a fox is that there is minimum human activity at night time. As there are no people to bother the fox during its hunting times, it can easily find food.

Foxes are very scared of people and will do their best to avoid us. If you see a fox in the daytime, then it has come out only because there weren’t any other options or its habitat was lost.

Foxes do not hibernate. So, they’re active all the year. At extremely cold temperatures, foxes may seek shelter for some days until the temperatures goes up a little, then they continue their normal routine.

A foxes hunting grounds are usually within a radius of one or sometimes two miles.

If they get too cold, they may take a break and rest under the sun to warm themselves up. If a storm occurs, they will have to seek shelter until the weather returns to normal. As foxes don’t hibernate, they utilize their winters to mate and raise their offspring.

If you see a fox roaming around your porch, that’s because they make dens under porches or homes during the breeding season. Both the parent foxes hunt together for their kids until they get old enough.

Foxes can be both nocturnal and crepuscular mammals, meaning that they hunt at the night as well in the day, too, if it’s absolutely necessary.

Some species only hunt during the day, and some are strictly nocturnal. Hunting at the night is much easier for foxes, so most species usually prefer hunting at night time as it not only helps them to be fully stealthy but as there are no humans around as well, it makes it even easier.