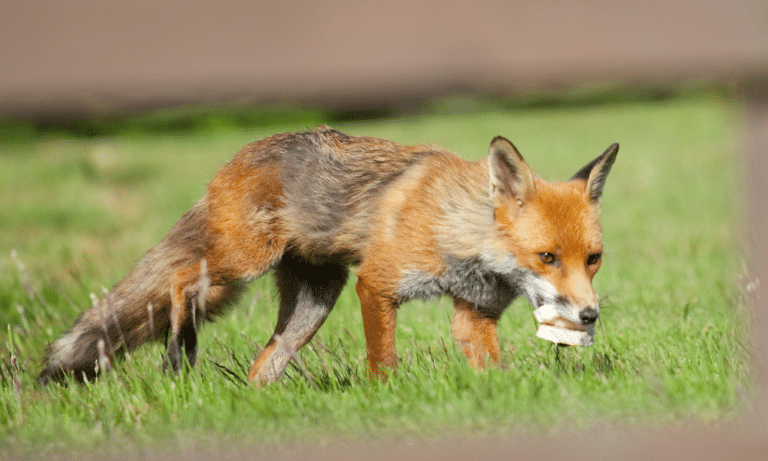 Foxes are canines, meaning they’re related to dogs, which are omnivores and eat almost anything. But, foxes are also related to wolves, coyotes, and jackals, which have a strictly carnivorous diet. So, are foxes omnivores or carnivores?

Foxes are omnivores, and they have a very diverse, balanced diet. They’re excellent hunters, especially at night but even sometimes during the day, but they also eat fruit, plants and dairy.

Foxes have an omnivorous diet, and they eat not only meat like most of their relatives, but they also like to eat plants and fruits.

Foxes are opportunistic when they want to eat. They eat whatever is available and aren’t picky when it comes to food. Fruits, plants, berries, and even carcasses are common food options for foxes. If you have a fox coming into your garden, leave any leftovers out for them and they will eat them up.

Why Are Foxes Omnivores?

An animal is considered to be an omnivore if it eats all kinds of edible food. An omnivorous animal eats both plants and meat. Foxes are excellent hunters and eat a lot of meat.

They hunt at night where is little human disturbance and few competing predators, and sometimes they come out during the day to hunt birds, rodents, etc.

Foxes are omnivorous because meat isn’t the only thing they eat. They will eat berries, fruit, and eggs from other animals when prey is limited.

Foxes are also scavengers as they eat the remains of dead animals as well. Foxes eat insects and bugs too. Foxes are highly adaptable animals and will eat almost anything to survive another day.

They even store excess food for later use if there’s extra. For example, if a fox goes on a hunt at night and catches a big prey and only eats some of it, the fox will store it in a burrow in its den.

Can Foxes be Cannibals?

Perhaps surprisingly, foxes can be predators of other foxes as well as they’re known to be cannibalistic. However, cannibalistic behaviour in foxes is very rare. A fox may only result in a cannibalistic diet if it’s starving and hasn’t found any food, neither fruit nor meat for a long time.

This is when it will take a cannibalistic approach.

A cannibalistic fox would not eat any fox of their own family. They will find a different den with foxes and may steal a pup from that den for food.

Foxes are also solitary creatures. They want to stay alone unless it’s looking for a mate, otherwise, they hunt solitarily, and if they cross paths with another rival fox, they may fight until one of them is killed, and the surviving fox will eat the dead fox.

There can be many reasons which drive animals to the last resort of killing another animal of its own species to survive.

How Do Foxes Hunt?

Foxes can be foragers and hunters and are willing to eat almost anything if their desired food is unavailable. Due to their solitary nature, foxes make excellent stealthy hunters. They hunt preferably at night as most of their prey is active at night. There is also little human disturbance and less rival predator activity.

Foxes hunt usually at night, but you can also see them during the day as some of their prey comes out during the day, and if they don’t find anything at night, they’ll try in the morning.

Foxes are famous for being cunning, clever, and quick predators. Though they’re canines, their hunting strategy is not similar to their canine relatives as wolves, wild dogs, and coyotes usually hunt in packs, and they chase it, corner the prey and attack it.

Foxes hunt like cats. They use their stealthy talents and sneak up behind an unsuspecting prey and attack from behind when the prey is fully unaware of them. Foxes can also be termed ambush predators as they use a strategic approach to hunting rather than alarming the prey and chasing it until it tires down.

Foxes have excellent senses. They have amazing sight, smell, and hearing. They can hear their prey from afar and can even detect it from 3 feet underground. With such a useful ability, foxes can easily dig and find insects and burrowing rodents to eat.

Foxes are also good climbers, something that their relatives can’t really do. A fox may easily climb up a tree to hunt birds or chipmunks and squirrels.

What Plants Do Foxes Eat?

Foxes like to eat live prey in winters, specifically the ones that live in more temperate climates. In summers, when fruits and vegetables are in abundance and are easily available, they will feast on them.

What Can Foxes Not Eat?

Foxes will not eat something that they don’t like and will avoid it if some food has a negative reaction to them, but some food that may be completely fine for us to eat will be highly toxic to foxes, so be careful what you put outside in the trash as foods like caffeine, chocolate, garlic, avocados, grains, onions and some fruit seeds may be very toxic to a fox.

Foxes have a diet that is similar to cats and dogs even though they are considered mainly wild predatory animals and have cousins like wolves and coyotes.

Foxes are very adaptable animals that have a lot of contingency plans if they can’t find their preferred meal. For example, a fox may eat berries, fruits, vegetables, carcasses, and dead animals, and even if that is not available, a fox may resort to the last possible option that is cannibalism.

Foxes are sly, cunning, and clever opportunistic predators and even steal food from people, salvage trashcans, and steal eggs from other animals in order to survive.