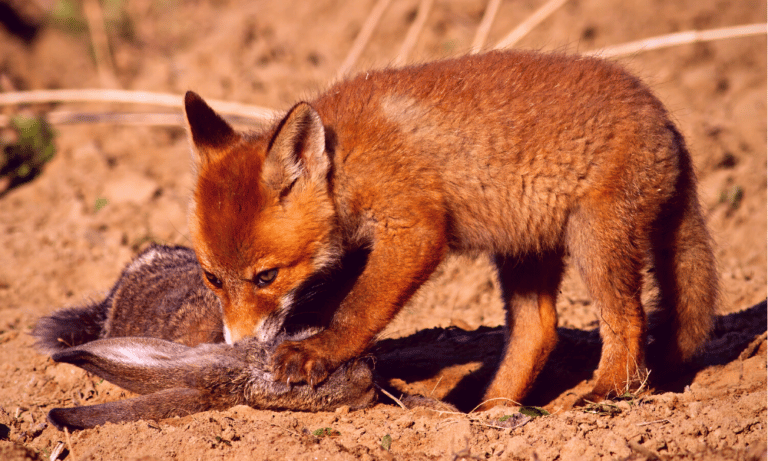 Foxes are sly, clever and wily animals that eat just about anything they can get their paws on. As omnivores, foxes have a large diet consisting of anything from plants and insects to animals. But does that include rabbits? Do foxes eat rabbits?

Yes, foxes do eat rabbits. In fact, rabbits make up a huge proportion of a fox’s diet. Wild rabbits are a main source of food for foxes, however, if the opportunity is there, a fox will eat a pet rabbit too.

Rabbits are the perfect prey for foxes. Firstly, foxes are fast enough to catch a rabbit if one tries to run away from them. Rabbit meat is, also, a very valuable source of many nutrients for foxes; hence they make up an important and major proportion of their diet.

Rabbit meat has vitamin E, Vitamin B12, calcium, phosphorus, zinc, and many other important nutrients, minerals and vitamins. They’re also a good way to consume plenty of fat and protein.

Foxes need to consume fat for building up the fat reserves that help them survive winters when food is a scarcity.

Do Foxes Eat a Whole Rabbit?

Sometimes! A fox will eat as much of a rabbit as it needs to eat to be full. If there is a rabbit leftover then they’ll either take it back to their den or they will bury it to consume it later on.

Yes! Foxes will eat hare too. A hare is significantly larger than a rabbit which means it can sustain multiple foxes or be consumed over multiple meals. 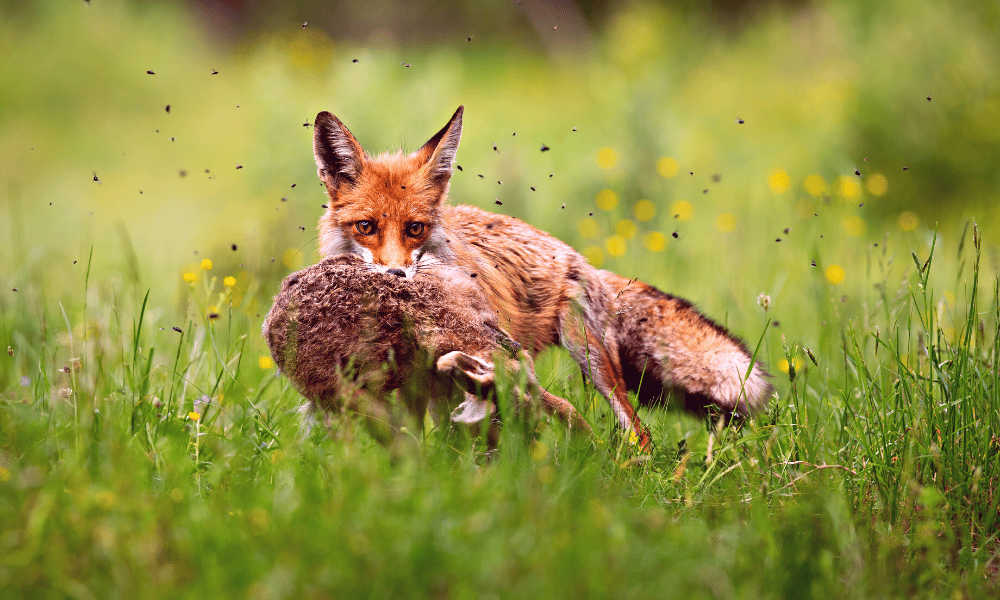 Are Rabbits and Foxes Enemies?

Foxes and rabbits are enemies because foxes are their predators, and rabbits are the most common prey that foxes attack and eat. A predator/prey relationship between a fox and a rabbit is never going to be a friendly one.

Rabbits are a healthy source of food for foxes, though as omnivores, foxes can eat several other things like fruits and vegetables. Foxes need a lot of fat and protein, which comes from meat. Rabbits are easy to catch and are very nutritious for foxes.

Be warned! As foxes love to eat rabbits, if they sense one in your garden, they will most likely climb up your fence and try to get into your pet rabbit’s hutch leading to severe damage in some cases as they become increasingly frustrated that they cannot get to the rabbit.

Any small animal is unsafe from foxes. Even small dogs and a few cats turn into fox prey.

Wild rabbits are fast and may run away from foxes, but pet rabbits are in their enclosure which is the only safe place. With no place to run or hide, a pet rabbit is defenceless. The hutch isn’t invulnerable to a fox, and if the fox has enough time, it can certainly break into the enclosure and eat the poor defenceless bunny.

Foxes attack and eat rabbits as rabbits are an easy meal for a fox. They’re defenceless animals that a fox doesn’t have difficulty catching. Often a fox would be stealthy and kill the rabbit without it even suspecting anything.

If you’ve seen a wild rabbit run, you know how fast they can be, and several times, a wild rabbit can actually run from and escape a fox chasing after it, but foxes have strong legs that provide them with enough stamina to keep up with the rabbit, in most cases.

Foxes also have flexible ankles that help them swiftly change direction without losing speed when a rabbit changes its route. In hope of escaping, a rabbit will bolt into its burrow, hoping the fox will stop and lose interest, but when foxes see a meal, they don’t back off easily and don’t go empty-handed.

The fox will try its best to enter the burrow even though it won’t fit. To help it fit in the hole, the fox uses its semi-retractable claws that help it to dig into the burrow and provide it with enough space to enter in.

If enough of the burrow is clear and the rabbit is visible, the fox will drag the rabbit out with the help of its strong claws and grip.

Foxes also have excellent hearing and can hear their prey’s movements and sounds from afar. Foxes can hear if a rabbit has burrowed underground and will dig to catch them.

How Do You Protect Pet Rabbits From Foxes?

If you’re worried about a fox attacking and eating your rabbit as there are several foxes in your area, then you can’t simply keep the rabbit in a hutch. It won’t be a good life for the rabbit. If you want your rabbit to explore more and have a little freedom, then you’ll need to get a rabbit run.

A rabbit run is a larger and longer rabbit enclosure, so your rabbit has more space to move around. It is netted all over, so your rabbit can also see everything outside. These enclosures are also secured to the ground with pegs so foxes can’t easily remove them.

Avoid cheaper, plastic rabbit runs and, instead, focus on those that come with metal pegs to secure them to the ground and those which have metal chicken wire for protection.

Foxes are omnivores and opportunistic predators, so not only do they eat veggies, plants, and fruits but also animals, including any animal that is smaller and weaker than them – like a rabbit!

A fox can easily attack, kill and eat a rabbit. Rabbits are, also, a nutritionally important meal for foxes which makes foxes and rabbits enemies. They have a typical prey/predator relationship.