Foxes are excellent predators that can kill several types of animals that are smaller than them with ease. They eat most kinds of birds, their eggs, rodents, and rabbits. If you like squirrels on your trees and in your garden then you might be asking yourself: Do foxes eat squirrels too?

Yes, foxes do eat squirrels. Most foxes, including red foxes and arctic foxes, are excellent mammalian predators that can hunt various small animals, including all squirrels.

As squirrels live in the same habitat as foxes, they make an easy meal for them as the fox doesn’t need to venture too far. Though a small meal, as foxes are opportunistic, they basically eat whatever they can find.

A squirrel alone is unlikely to sustain a fox and a fox will need to continue hunting for a larger meal but that won’t stop foxes from eating squirrels that they come across.

Do Foxes Eat the Entire Squirrel?

Foxes will eat nearly an entire squirrel. They’ll certainly eat all the meat they can find on the body of a squirrel. They will avoid eating as much of the fur as possible as it will give them no nutrients but can be unpleasant to consume.

A common sign that a fox has eaten a squirrel (or another small animal) is that they will often leave the entrails behind. They provide no benefit to the fox and, we can only assume, have an unpleasant taste that the fox wants to avoid.

Foxes are opportunistic predators and won’t pass on a meal. An already dead animal, such as a dead squirrel which is not killed by them, is a free, effortless meal to foxes. So, yes, foxes eat dead squirrels.

A fox’s den is often filled with a lot of food that the fox can eat whenever food is scarce, and a fox hasn’t made a kill or hasn’t found any other food.

Are Squirrels Scared of Foxes?

Squirrels get scared of foxes because foxes think of squirrels as an easy meal. Squirrels and foxes share the same habitats as foxes live in both rural and urban areas, forested areas, and farmlands.

Of course, squirrels aren’t much of a meal due to their small size for foxes, but if a fox kills a couple of them, it’ll be full for a decent period of time, certainly full enough to enable to them to hunt for larger prey.

You may think squirrels are agile animals, and if they live high above land on tall trees then how would a fox eat them? Well, the answer is that not only are foxes are excellent predators of stealth and are fast runners, they also can easily climb high walls, fences, and trees.

Foxes like the gray fox are exceptional climbers and can jump really high and can climb branches to reach a squirrel and then eat it. There aren’t many places for a squirrel to run whenever a fox is nearby.

A fox’s strong legs helps it to catch a running squirrel with ease. A fox’s sharp hearing helps them hear everything very clearly when they’re hunting at night – even a squirrel eating in a tree!

Foxes hunt and eat squirrels mainly because squirrels are small, and foxes eat anything that is smaller than them.

Foxes eat squirrels as they can’t put up a fight, and it isn’t difficult to catch them.

Another reason is that squirrels have the same habitat as of a fox, so it’s easier for foxes to kill them without traveling to long distances. As mentioned earlier, foxes are scavengers, opportunistic predators, and excellent hunters, so they eat everything, and foxes are an easy score.

Despite their small size, foxes have a large appetite and eat almost everything. Being omnivores, they’re not limited to just meat and can eat veggies, fruits, berries, dairy products and more!

Foxes are amazing hunters both during the day but especially at the night as with the help of their excellent hearing, vision, sense of smell and powerful claws and legs, hardly any small animal such as birds, frogs, lizards, insects, smaller rodents like rabbits, groundhogs and squirrels can run away.

Foxes are scavengers, so if they can’t find living meat, they won’t have any problems with feasting on dead meat, such as a dead squirrel. 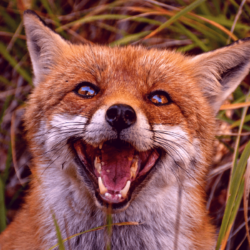 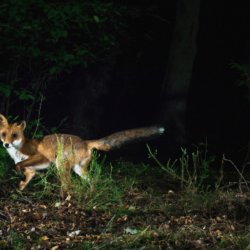