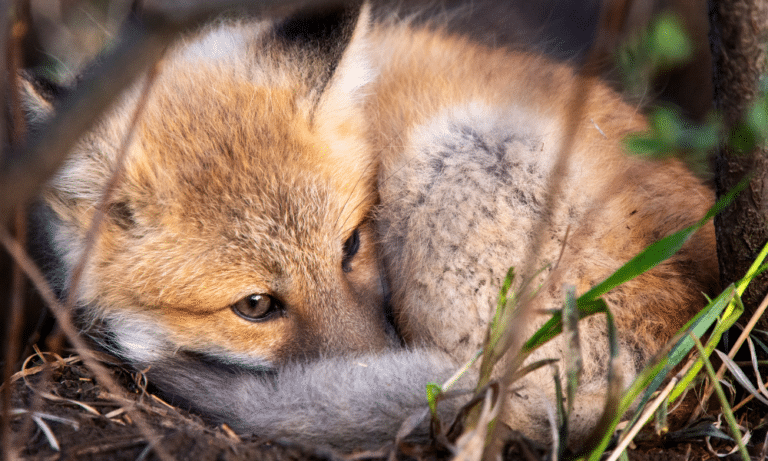 Foxes are found all over the world in different types of biomes, from harsh scorching deserts to the icy cold tundra. They are found everywhere and can survive even the harshest of all temperatures. If they can survive the cold, do foxes hibernate or do they not bother?

Foxes don’t hibernate as they don’t need to. They can easily cope and survive through diverse and extreme weather conditions. They can find and scavenge food almost everywhere, and as they’re omnivorous, they can eat almost anything to keep themselves well-fed.

If they can’t find any animals that they usually hunt as all their prey would be hibernating, they won’t have any problem eating other things. Foxes can eat berries, fruits, veggies, and even dead animals, so basically, a fox never stays hungry for long.

If, for instance, the fox couldn’t find any fruit or berries or animal corpses, it will venture far from its usual hunting grounds to find more food or visit someone’s yard to sneak into their trash cans for food or even eat the fruits from their garden.

When Do Foxes Sleep?

Foxes sleep during the day, mostly, as they want to avoid the daytime as much as possible. They’re nocturnal animals, so they mostly hunt and look for food at night.

Foxes can sleep for more than 8 hours of the day and only wake up when the sun is about to go down.

Every type of fox has distinctive sleeping schedules, though most of them only sleep for 8 hours. Foxes aren’t heavy sleepers and will wake up if they hear any animal that is too close to their den.

Foxes have excellent hearing and can easily hear even the most subtle sounds in the wild from afar.

Though some foxes are not strictly nocturnal and will be seen wide awake in the evening, some hunt in the day and sleep anywhere near their dens or on an open field or near bushes. Their tail helps them keep them warm by curling up and hiding them.

You may think foxes have dens, then why don’t they sleep in them? A fox’s den is mainly for raising their kits or storing excess food that they will eat later.

Some types of foxes, such as the grey fox, can even sleep on trees. As foxes have strong legs, partially retractable claws and athleticism, they can jump very high and climb up trees to sleep on them, which is much safer than on the ground as any big predator won’t disturb their slumber.

A mother fox sleeps in the den with the kits to keep them safe, the father fox sleeps either on the opening or somewhere near so it can hear any dangers or any other predator that’s too near the den.

The mother fox (vixen) also stays with the kits throughout the time, the father fox is out hunting, and sometimes both mother and father foxes hunt together.

What Does a Fox Do in the Winter?

If they can’t find their favourite meals, as most of the animals that foxes like to eat would hibernate, they will resort to other foods as meat isn’t the only thing a fox eats. As mentioned earlier, a fox eats berries, fruits, veggies, dairy products and even animal carcasses as well.

If a fox doesn’t find those either, then it could take a visit to your garden or yard. When foxes can’t find food, they sometimes visit people’s yards to find any leftovers in the trash cans.

If you have small pets like small dogs, babies of any pet, chickens and their eggs, then a fox might hurt and eat those too, and in the case of a chicken coop, foxes may eat one chicken and kill the rest and take them to their den or will just steal the eggs.

Foxes aren’t bothered with rain or snow, but if the weather is too cold, they’ll sit under a sunlit area for warmth. If there’s a storm or any extreme weather conditions, the fox will go back to its den or find any other alternative shelter.

Do Foxes Only Come Out at Night?

Foxes like to avoid daytime as much as possible, so they sleep 8 or sometimes 1o hours, depending on the species, to pass the daytime.

Foxes get certain advantages over other animals, especially at night, so they prefer hunting at night or after evening. Their excellent hearing, vision, smell, and powerful claws help them either sneak up on prey from behind and attack them or chase down prey and eventually eat it.

Most animals hibernate when winters are around the corner, but foxes don’t require hibernation as they’re versatile survivors of the wild. Their thick fur helps them survive the cold breezing air, and as they’re omnivores, they have a very flexible diet.

They can eat almost everything such as berries, fruits, veggies and even dead animals if they can’t find prey. Foxes are mostly nocturnal and spend most of the day sleeping while they hunt during the night. Some foxes hunt during the day as well.