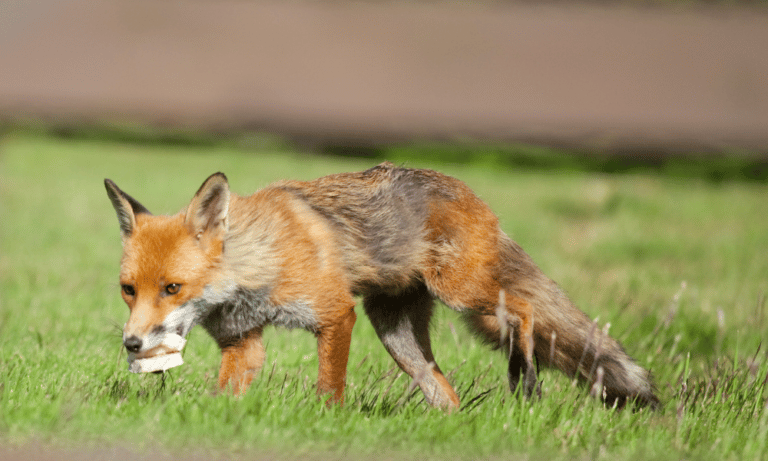 Foxes are famous for being excellent hunters and opportunistic predators but are foxes only predators, or do they eat other food items as well? Is a fox a strict carnivore like its canine cousins such as coyotes and wolves, or are foxes omnivores? Simply put, what do foxes eat? Let’s find out!

Foxes are omnivores, and they have a diverse diet. Foxes eat small animals such as rodents, birds, and insects. Foxes also eat berries, fruits, veggies, and dead animals.

Foxes are excellent hunters and opportunistic predators, meaning they don’t miss a chance for food. If a fox finds berries, vegetables, fruits, and even dead animals, it will eat them all and will take the excess food with it to its den, which will come in handy when food is scarce or if the fox has a family.

Foxes like to hunt all sorts of small animals such as rodents, insects, and birds. A fox will kill more than it will eat to store the rest in its den.

If a fox can’t find enough food in its everyday hunting grounds, it can even visit your garden and enter it to find any food, as foxes can eat leftovers from the trash. If you have a garden, then that will be in danger of being a fox meal too.

What is a Fox’s Favourite Food?

Foxes love to eat meat, and their favourite food is protein-based items. Foxes will hunt and love to feed on small rodents, birds, and insects.

Foxes love to consume insects as well, and insects make up a large portion of a fox’s diet. Feeding on beetles, grasshoppers, caterpillars, and silkworms are some of the many insects a fox would love to munch on. Insects are also easy to eat. They’re tiny, so a fox doesn’t have to hunt them like with bigger prey such as rodents, reptiles, and birds.

Foxes will hunt anything that is smaller than them. They love eating high amounts of protein-rich foods, such as fatty fish, birds, eggs, and rodents. If a fox doesn’t find enough meat to consume or any meat in general, it will try finding veggies, berries, dairy products, nuts, and fruit.

Foxes live worldwide in varying biomes, so the source of food would be different in each region as well. Hence, it depends on the region of the fox that is living there on what foods it loves to eat most.

For example, fennec foxes that live in dry desert areas mostly feed on mice, groundhogs, and other smaller rodents that live in the desert with them. Siberian foxes are bigger than fennec fox and some other species, too, so they can eat larger prey like rabbits and hares.

What Do Foxes Eat in the Wild?

In the wild, the fox’s habitat and the current season depend on what the fox will find to eat. Foxes are excellent hunters and amazing foragers. They’re opportunistic predators that don’t miss out on an opportunity regarding food.

They will find something to eat no matter the circumstances. For example, foxes in northern climates will love eating animals that have adapted to the cold, such as snowshoe hares and lemmings. Similarly, the foxes in the south will feed on warm adapted animals.

When winter comes, foxes eat smaller animals, but as in winters, most of their favourite meals aren’t present, such as most types of insects and rodents that they like to eat, so they either find vegetation and fruits to eat or feed on dead animal matter.

Foxes love storing food in their dens as well, which comes in handy when food is scarce or unavailable. They do the same before winters.

In summers, foxes like to eat more fruits, vegetation, seeds, nuts, berries, and insects. Foxes will forage for vegetables and fruits in the wild. They can even dig up potatoes and other vegetables that are grown on the roots. When it comes to fruits, foxes won’t eat them too much, as an excess fruity diet won’t be too healthy for them.

Should You Feed Foxes?

There are certain things to avoid when feeding foxes to feed them safely. As they’re wild animals, despite their friendly and cute appearance, you’ll have to avoid taming, touching, and hand feeding them as foxes tend to carry diseases, and they could bite you if you make them feel threatened.

Avoid putting a lot of food out, so the fox doesn’t get overconfident and dependent on you for food. Don’t put out food that they can store or take with them. This will encourage them to dig into people’s gardens. Instead, put food that they only can eat on the spot.

When feeding foxes, set a specific time so the fox comes at that exact time the next day. You can feed it raw or cooked meat and tinned dog food.

Foxes are omnivores, and they aren’t strictly carnivorous. They’re opportunistic predators and excellent hunters that nearly eat everything. Foxes can eat rodents, birds, vegetables, fruits, dairy products, berries, and even dead animals if given a chance.

It’s risky to hand feed a fox, so distance must be taken as they’re wild animals who can bite or might have diseases.