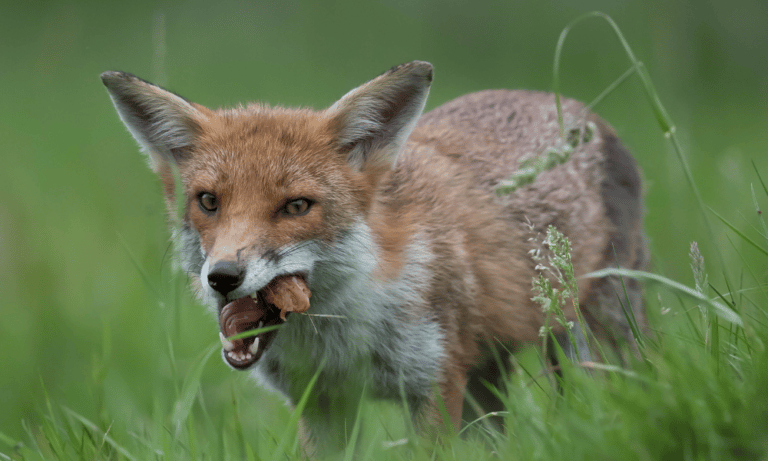 Foxes have a diverse diet, and as they’re omnivores and opportunistic predators, they eat almost anything they come across. If you’ve seen a fox in your garden, you might decide you want to help it out with food. But, why should you not feed foxes?

You should not feed foxes as it can encourage other pests, such as rats. By feeding foxes, you can also make them reliant on the food you leave out and they will lose their natural hunting abilities over time.

A hungry fox that hasn’t found much food in its usual hunting grounds may visit your garden to scavenge through your trash or to find food in your garden. Some people find these habits of foxes to be a nuisance, while others like to admire them from their windows and may even come out to feed them up close.

However, feeding foxes is not recommended as foxes are wild animals, and it’s risky for you and the fox. Although they’re not notoriously dangerous animals, they are still unpredictable.

But this isn’t the only reason why you ought to avoid feeding them. If you regularly feed foxes, the fox will eventually lose its natural fear of humans and feel confident in approaching people more often.

It’s also worth considering that the chances of foxes entering your home may increase if you’ve fed them – not something you’d want to happen, especially if you have pets or small children.

What Food is Poisonous to Foxes?

Feeding foxes regularly may be a cause for concern due to previously mentioned reasons, but feeding foxes now isn’t the worst thing you could be doing.

So if you want to feed foxes, you should keep in mind that certain food items are not okay to be given to a fox. If you have pets, then basically any food that is poisonous to your cat or dog is also poisonous to a fox. This will include:

Foxes are omnivorous predators that eat mostly anything in the wild, but grains aren’t included in their diet, so when feeding foxes, keep in mind not to feed the fox any grains such as wheat, oats, or rice.

Foxes love eating fruits, berries, and veggies, but they despise and avoid fruits like grapes and raisins as they can cause kidney problems, vomiting, and hypercalcemia, so always avoid giving these two lethal fruits to foxes.

All these fruits have toxins in them called glycoalkaloids. Even stems and leaves of these plants need to be avoided for foxes as they’re just as dangerous as the fruit itself.

After the tomatoes, pepper, and eggplants ripen, it’s said that the toxins in the plants leave so they’re safe for the animals to eat, but the fruits retain the toxin levels, still making them unsafe for foxes.

Tomatoes can be fed to foxes after ripening, but at a controlled level, so the toxins don’t build up.

When a thirsty fox comes your way, give them plain water and avoid anything else. Coffee is lethal for foxes because it contains excessive levels of caffeine which are lethal enough to kill a fox.

Similarly, chocolate consists of a poisonous compound called theobromine that is toxic to several animals, including foxes.

Is It Wrong to Feed Foxes?

Feeding foxes is fine if you feed them now and then, for example, maybe once a week. If you feed foxes regularly, every day, that is wrong because it’s risky for yourself and the fox.

Regularly feeding a fox may make it confident enough to ask for food from people often, and not everyone would have the same reaction as you would think.

Some people are scared of foxes and think of them as nuisances and won’t wait for a second to snare or trap an intruding fox on their property. Some people may even resort to using poison to rid themselves of the fox.

If foxes are regularly fed, they start to visit your property more and more often and might even enter your house through windows, cat flaps, and doors. Foxes rarely attack adults, but an agitated or threatened fox, confused in your house, can hurt your children or pets.

Is Feeding Foxes Illegal in the UK?

In the UK, it’s not illegal to feed foxes, but certain issues should be accounted for when feeding them as the food you leave out may bring in other pests like rats.

Is Feeding Foxes Illegal in the Us?

In the US, it’s legal to feed foxes, but there are risks. However, feeding a Catalina Island fox is illegal, and they’re a federally endangered species.

Feeding foxes weekly and randomly may be alright, but consistent or regularly feeding foxes may be risky for you and the foxes. Several food items that are poisonous to cats and dogs are also poisonous to foxes. These items should be avoided, so you don’t accidentally kill or hurt the fox.

In the US and UK, it’s legal to feed foxes but keep in mind the risks that come with it.

1 thought on “Why Should You Not Feed Foxes?”