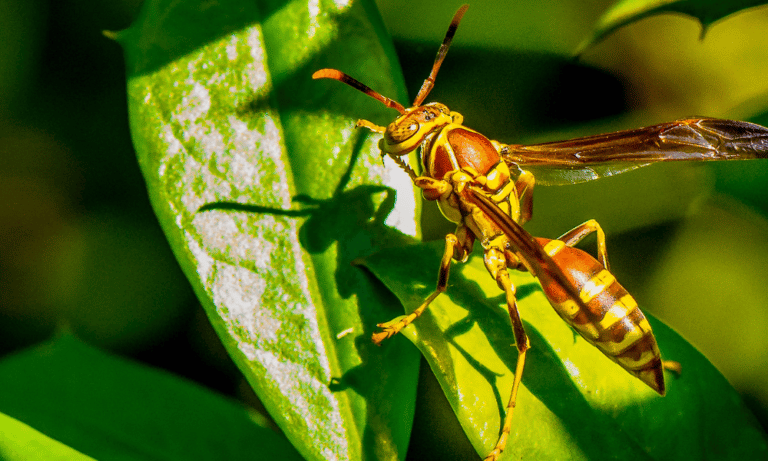 Wasps have a bad reputation, and people assume all types of wasps are dangerous. If you notice a wasp in your garden that looks similar to a yellow jacket, it could be a paper wasp. But are paper wasps aggressive too?

Yes, paper wasps can be aggressive and dangerous, but only when provoked or when you’re around their nest.

Paper wasps are social insects that don’t take kindly to trespassers lurking around their nests. They can be dangerous, aggressive and hostile, but only if you provoke them or mess with their nest.

They vigorously protect their nests and don’t like to take any risks, so they attack anyone that comes too near.

A paper wasp’s sting hurts more than a bee’s, but fortunately, you can avoid its wrath if you avoid going near its nest and never try to provoke or agitate it.

If you’re in an unfamiliar area where you don’t know if there are any wasp nests nearby, you can avoid getting attacked by a wasp by not using perfumes and wearing clothes that completely cover you.

What are Paper Wasps?

Paper wasps are a type of stinging wasp; they have long legs and are reddish brown or black with yellow markings. An average paper wasp is 5/8 to 3/4 inches long.

They’re given the name “paper wasps” mainly because they scrape wood from people’s houses and chew it to make some pulp which they use to make their umbrella-like nests which look as if they’re made from paper.

Paper wasps like to live in a temperate climate and are found in all the temperate regions worldwide.

Paper wasp nests are often found on transmission towers or on the top floors of buildings. Males hang out near female swarms and are very protective of them. When paper wasps mate, the males die, and the females seek shelter for winter.

Paper wasps, like other wasps, are social creatures that are very protective of themselves and their nest. They won’t bother you if you don’t bother them, but if you even accidentally come closer to their nest, they won’t hesitate to sting you.

Paper wasps will not take easy for trespassers and intruders and will sting anyone or any animal that comes too close to their nest.

If you see a single paper wasp, don’t be alarmed, as it won’t hurt you unless you try to swat it, trap it, or shoo it away.

Paper wasps don’t give second chances and immediately start attacking if they feel threatened. Avoid getting stung by paper wasps as their sting is excruciating, even worse than a bee’s sting.

If you know where the paper wasp nest is in your area, simply try your best not to go there, as paper wasps are only hostile when they’re near their nest; they would be a little calm when they’re far from it.

When you don’t know where a paper wasp nest is, as mentioned earlier, avoid perfumes, wear fully covered clothes and be careful.

Wasp bites are rare as their sting is deadlier and more helpful in defending themselves and their nests.

Paper wasps can sting multiple times, and they utilize their venom in each sting by using it only a little bit each time. Avoid approaching a wasp’s nest as the effects of being stung can be deadly.

Which Wasps are the Most Aggressive?

Paper wasps aren’t the only aggressive type, as other types of wasps are much more aggressive and deadlier.

Bald-faced hornets can quickly get agitated and hostile. They dislike vibrations that can be carried through branches of trees, walls, and even air.

Some people have been attacked by bald-faced hornets when mowing their lawns because the vibrations from the lawn mower disturbed them. These are dangerous wasps that also have a habit of pursuing their victims.

Warrior wasps have an intimidating large size and are known for being very aggressive. These wasps also have a threatening display of scaring off intruders and trespassers from their nests.

They mainly make this warning sound because they want to avoid confrontation as they have barbed stingers.

Barbed stingers are like the stingers of a bee, meaning once they sting you, their stingers detach from their bodies, sticking in the skin of their victim and killing the wasp in the process. A warrior wasp’s sting gives excruciating pain.

Yellow jackets are the most aggressive type of wasps in the wild. They’re the most common reason when someone is stung in their backyard.

A yellow jacket wasp can repeatedly sting their victims and even bite them. They get more aggressive in autumn, and more people get stung around this time.

In colder weather, yellow jackets can’t find food, so they starve, and in their starvation, they get even more aggressive and sting people and raid beehives to find food.

If you have more questions about the aggressive nature of paper wasps, then these FAQs could be helpful:

Can Paper Wasps Kill You?

As is the case with most wasps, one wasp would not be able to kill you. It would take anywhere from 30 to 40 stings in quick succession to be lethal.

Paper wasps are no more or less dangerous than most other common wasps. They will only attack you if they are provoked.

Not many people like wasps, mainly because they’re most of the time aggressive. However, most types of wasps, such as paper wasps, only get aggressive when you provoke them or as they’re very territorial; if you go near their nest, they’ll attack you.

Paper wasps sting and bite people if they feel threatened, but they’re still not as aggressive as warrior wasps, bald-faced hornets, and the most aggressive type; yellow jackets.