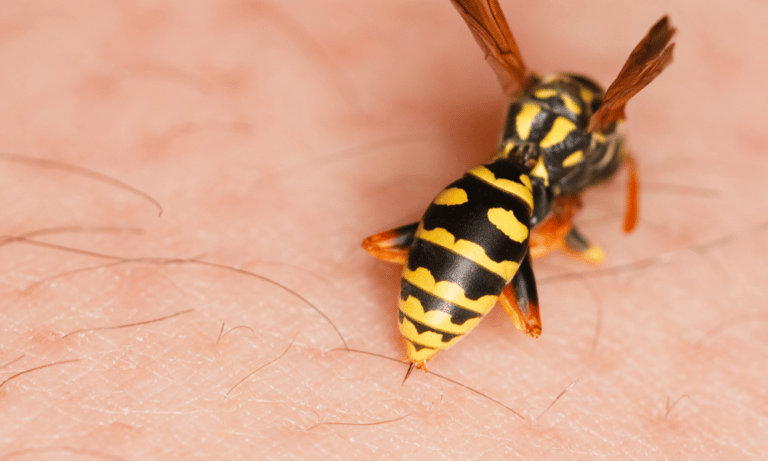 We all know that wasps can sting. But are wasp stings dangerous or just a little unpleasant? And can they cause you any actual long-term harm?

While ordinary insect stings and bites might not be too concerning and often go unnoticed, wasp stings are different. Wasps and bees may not look exactly the same, but one thing they both have is a stinger.

A wasp’s sting is far more painful than a bee’s. Fortunately, you can avoid being stung by a wasp as they only attack you if they feel threatened, so if you don’t bother them, they won’t bother you.

Wasps sting more in the warmer months when people are often outside. A wasp’s stinger is for self-defence and has venom in it. The venom can have varying effects, some people shrug it off after a few hours, and others get severely affected.

Avoiding getting stung by a wasp is easier said than done as wasps easily get threatened and will pursue to sting you; you may run but often get stung by it.

How Many Times Can a Wasp Sting?

Some bees can only sting you once because they have a barbed stinger that detaches when the bee stings someone. When the stinger detaches, it gets stuck in the victim’s skin, and the bee dies.

This is different with wasps, as wasps do not lose their stinger when they sting someone. This also lets them sting multiple times. Wasps also, because of this unique ability, can utilise their venom in small amounts each time they sting.

Most wasp stings are excruciating, especially if they sneak up on you and sting you.

However, after they’ve stung you once, the next time they sting wouldn’t be as bad as the first and would only cause minor discomfort, which can easily be treated.

How Painful is a Wasp Sting?

Wasp stings are venomous, so they won’t go unnoticed; if you’re stung by a wasp, you’ll feel it. Common symptoms of being stung by a wasp include redness, swelling, itching, burning, and pain in the sting area.

Wasp stings are painful but not usually concerning, and people often only get minor local reactions. Still, some people have insect allergies and may be allergic to wasp venom, then the reaction to wasp stings can be severe or even life-threatening.

If someone with a wasp venom allergy gets stung by a wasp, their symptoms can develop in a few minutes after being stung or bitten. The severity of the reaction can vary from one person to another, so it can affect some people only mildly, while others might have a much more severe reaction.

Can Wasps Sting Through Clothes?

Yes, wasps can sting you through most types of clothes, especially lightweight clothes made of thin material.

However, they have little reach, so thicker clothes would be more effective for protecting yourself from wasp stings. It’s hard for them to sting through clothes that are tightly woven because the threads would stop their stings from touching the skin.

Wasps have stingers that are straight and smooth, so they can easily penetrate most lightweight clothing and sting you.

For example, T-shirts are often made with thin, loose material, so they wouldn’t provide enough protection as jeans or sweaters.

If you’re going somewhere, there are often lots of wasps; it’s wise to avoid lightweight clothing and wear heavier material and remember to cover yourself, so no wasp finds an exposed spot to sting you.

Do you have further questions about wasps and the damage they can do with their stinger? Then check these FAQs out:

Will a Wasp Sting You For No Reason?

Wasps rarely sting you for no reason at all. Most often, they will only sting you when they feel threatened or when you provoke them. This usually happens when someone even unknowingly gets too close to their nests.

Can A Wasp Kill You?

Unless you have a severe allergy to wasp venom then it is highly unlikely, if not impossible, for a wasp to kill you.

Wasps can be one of the worst insects you can encounter because being stung by a wasp is very painful. However, you can avoid being stung by wasps if you avoid going near their nests or provoking a wasp if you see one.

A wasp’s sting is painful and can sometimes even have very severe reactions to someone who has an insect allergy. Wasp stings are more painful than a bee’s and can sting you multiple times. They can even sting through clothes if you’re wearing something light.