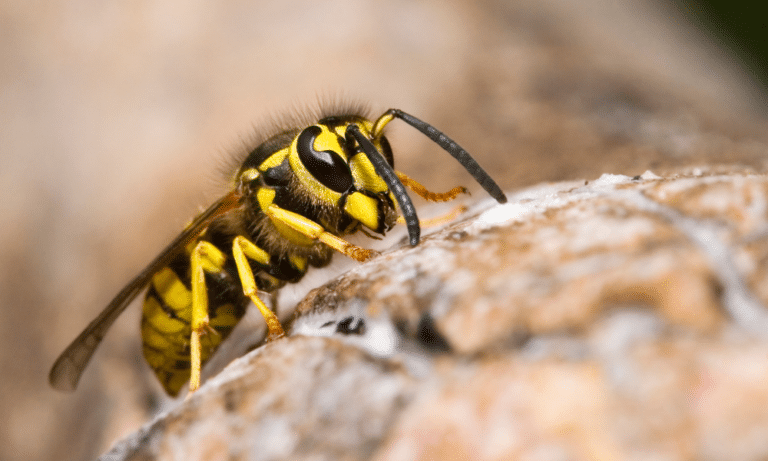 During the warm spring and summer months, you will see wasps buzzing around your garden as they search for food and build their nests. But you might also notice wasps showing an interest in wood. But, can wasps damage wood or not?

Unfortunately, yes, wasps can damage the wood. A few species of wasps eat wood but most chew wood to build nests.

There are some species of wasps that like to eat wood. However, most wasps are known to chew wood as they use it to make nests.

This process is called girdling, as wasps will combine the chewed wood with their saliva to build their paper-like nests. If you have wooden structures in your garden, they can get damaged by wasps.

There are some species of wasps that like to eat wood. However, most of the time, wasps perform girdling, which is when they chew wood to build their nests. By chewing, wasps are able to produce cellulose.

Wasps have a queen who makes the decision of when to build nests. When the queen gives the signal, the wasps begin the process. Wasps are dedicated to constructing their nests, and if you disturb them during the process, they may sting you.

The larvae of wasps will eat different food as opposed to the adults. The young larvae like to consume softer foods; hence they prefer to chew on softwood. With time as the wasps grow, they move on to harder woods.

Wasps are dangerous because they have the ability to chew through every material. These insects will chew through wooden floors, decks, fences and garden furniture.

Two common wasps which feed on food are wood wasps and horntail wasps.

These wasps ruin wood and can damage your home too. Hence, it would help if you were wary of some of the wasps which can ruin the wood.

Can Wasps Burrow Into Wood?

Not only can wasps cause damage at surface level, but these insects burrow into the wood as well. Wasps have strong mouths and will use them to scrape wood to make paper nests. These insects are not consuming the wood but collecting it to make their nests.

Wasps also burrow into the wood to make their nests inside wooden objects. In many cases, wasps enter into wooden structures and make it their home. These wasps will feed their larvae and live inside until their young mature into adults.

Many people have complained that wasps have damaged their garden furniture. You can tell that your furniture has suffered damage if you spot any grey lines. Wasps can remove layers from your furniture, which can affect its life.

There are a few ways you can stop wasps from consuming garden furniture. The first thing you can do is rub some soap on it. Soap is known to deter not only wasps but also other pests.

You can try using different scents like eucalyptus and peppermint oil. You can rub some scented oil on the garden furniture to keep the wasps away. You also have the option of creating a repellant spray by adding peppermint oil to water. You can spray the furniture or any spot where you spot wasps the most.

Why Do Wasps Collect Wood?

Wasp nests are made from paper and look like honeycombs. If you know wasps, you know they are attracted to wood and collect it. Wasps collect wood to build their nest. A wasp will source their wood from fences and porches and chew it to mix with its saliva to make its nests. This creates a pulp that these insects use to make their paper-like nests.

In the initial stages, the worker wasps only build a few cells to hold eggs. With time, however, these wasps will build more cells. The nest will last for only a year until the colony dies in winter.

Unfortunately, wasps can cause major damage to wood. These insects perform a girdling process, where they chew wood mix it with their saliva to form cellulose. Wasps need to use this to make their nests. Hence, if you have any wooden furniture lying around, it is likely to get damaged by wasps.

In addition, since wasps chew on wood, they can also make their way into your home. You can tell if you have wasps if you have been seeing them around a lot. In addition, you can hear wasps buzzing. Therefore, it is important to cover holes or any small openings where wasps can have easy access.